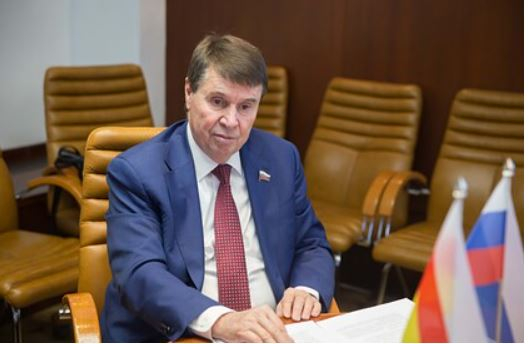 Member of the Federation Council for International Affairs Sergei Tsekov appreciated the opinion expressed by the press secretary of the Kiev delegation in the contact group on Donbass and adviser to the head of the office of the President of Ukraine Alexei Arestovich about the disadvantage of breaking off trade relations between Moscow and Kiev. The Russian politician noted that at last someone in Ukraine began to see clearly and say sensible things. Tsekov shared his opinion in an interview with Lenta.ru.

On August 31, Arestovich called a possible break in trade relations with Russia unprofitable for Ukraine. He drew attention to the fact that Russia is the fifth largest trade partner of Ukraine. “The world is structured in a complex way. Even if we close all this now, introduce martial law and so on, the question must always arise in politics and in life: “Well, let’s do what? What are the consequences?”

As an example, Arestovich cited the relations between Iran and Iraq, which “fought for 80 years”, but “did not sever diplomatic relations.” At the same time, he noted that Ukraine is striving to “reduce dependence on Russia,” and recalled that earlier it was the first trading partner.

The period of obscurantism in Ukraine will end sooner or later

Sergei Tsekov in a conversation with “Lenta.ru” said that Moscow is waiting for the end of the policy of fighting everything pro-Russian in Ukraine, therefore it does not stop relations with Kiev.

“The period of obscurantism in Ukraine, the struggle against everything Russian will end sooner or later. Well, Ukraine cannot develop as a state that wants to become a highly developed state in every sense, both economically and socially, with great influence, while having bad relations with Russia. We hope that this will happen as soon as possible, therefore we maintain relations with them, ”the senator explained.

The politician pointed to positive changes in the behavior of the adviser to the President of Ukraine. “Arestovich recently, I noticed, began to say sensible things. In particular, he spoke out sharply against the policy of virtually forced Ukrainization and the prohibition of the Russian language in Ukraine. In many ways, he began to see the light, although he was also so vehemently opposed to Russia a couple of years ago. Well, the rest will begin to see clearly, ”he summed up.

Earlier, the deputy of the Rada from the party “Opposition Platform – For Life” Vadim Rabinovich called Ukraine’s refusal of trade relations with Russia a catastrophe for the country’s economy. According to him, Kiev fell out with all neighboring states. “We stopped trading with Russia and the CIS countries and lost tens of billions of dollars and did not compensate for this in any way. The only thing that we do well is to quarrel with our neighbors, ”he said, noting that such a foreign policy would hit the pocket of ordinary Ukrainians.