Under the assurances of officials about import substitution in agriculture, the Russian seed market is smoothly flowing into the hands of foreign companies, creating a real threat to the country’s food security.

If planting material falls under sanctions and is banned from being sold to Russia, it is likely that famine will set in in the country.

Last year, the State Duma adopted a draft law that envisages the creation of a kind of “state register of breeding achievements approved for use.” In order to get on this list, breeders will have to pay a fee. How big is still unknown, but the biologists themselves suggest that we are talking about very substantial amounts. Naturally, the Ministry of Agriculture itself will make a decision on entering into the register. In addition, the law obliges to issue certificates of the quality of seeds of agricultural plants. It is assumed that this document will be issued by accredited bodies, and paid for by the applicants. If the annual fee is not paid, the variety, no matter how good it is, will be excluded from the state register. People who develop new varieties of crops will have to empty their wallets in order for the state to recognize their work.

Today, many experts say that the system that has been created for decades is breaking down. Previously, work on the creation of new varieties began in research institutes and more than forty breeding centers in the country. It was there that ideas arose about what new plant varieties should be and how to create them. Experiments were also carried out here, proving that the new variety is worthy of being used in agriculture. If it was possible, the novelty was registered at the institute itself. Further research continued in breeding centers. “That’s how they got the super-elite. Then the elite seed farms propagated the elite seeds and sold them to farmers throughout the country. Such a pyramid was from the idea to the marketable seed. Today, our seed production has been destroyed, probably completely, ”Academician of the Russian Academy of Sciences Vladimir Kosolapov states bitterly.

WILL THE COUNTRY BE HUNGER?

Today there are few new varieties, and even a few of them pass the stage of commercial production and reach the shelves. Usually, Russian companies buy ready-made flower and vegetable seeds from the West, bring them to Russia and pack them in bags. These seeds appear in stores. Sometimes they are sold under their own names, but often the reseller buys different varieties of vegetables or flowers of the same variety type and comes up with one beautiful name for them. Experts suggest that the introduction of state registration will finally give the seed market to the power of foreigners.

The fact that not everything is in order in the seed market became clear after the publication of the figures: in 2011, 35% of sugar beets were sown from domestic seeds, for potatoes this figure reached 47%, for corn – 66%. The Strategy for the Development of Breeding and Seed Production until 2020 was hastily adopted, the provision of domestic seeds by this time should have reached 75%. But 2021 has already ended, and our Ministry of Agriculture officials still have nothing to brag about. Statistics showed a deplorable result: for beets – 0.8% of domestic seeds, for potatoes – 12%, for corn – 46%. Now many are asking the question: what will happen if foreign planting material falls under sanctions and they stop selling it to Russia? There will probably be famine in the country…

Why are officials, not afraid of consequences, strangling domestic seed production? The answer is simple: big money is at stake! Depending on the crop, the contribution of seed material to the price of the final product is up to 40%! 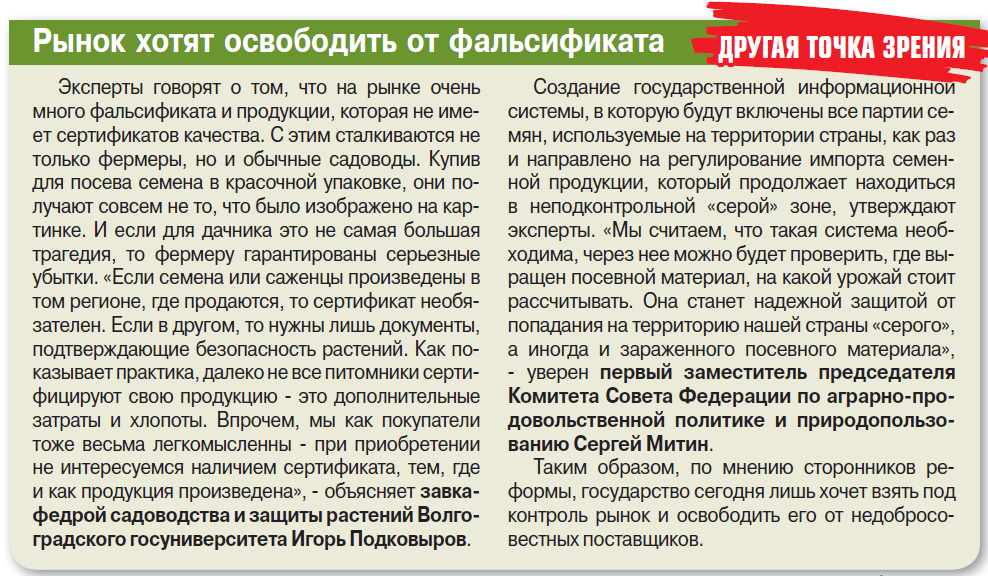