Rescued dolphins released into the sea are doing well

Seven Atlantic white-sided dolphins found themselves in a dangerous situation after they ended up on the shores of Cape Cod (Massachusetts, USA) at low tide. 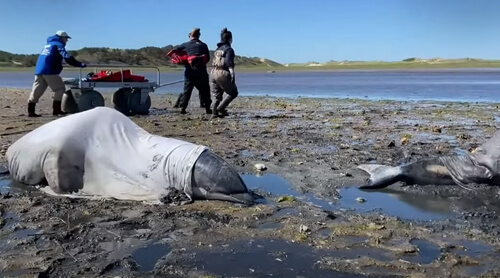 But the animals managed to save. Dozens of people came to the rescue, including representatives of the International Fund for Animal Welfare and volunteers trained to save our smaller brothers in trouble. The dolphins were wrapped in cooling blankets and transported along the coast to the water, after which they were released into the wild.

Everyone was especially happy to learn that the dolphins who received timely assistance are feeling well – this was confirmed by the satellite tracking system.

Unlucky elephant fell into a well