Quarrels over the contract?

On the Internet, major scandals flare up between celebrities every now and then, followed by millions of people.

The other day Lera Kudryavtseva had a big quarrel with Sarik Andreasyan. The director was offended by the TV presenter for the joke she voiced on the “New Wave”: “… there are many of them, like Sarik Andreasyan’s films, but, as they say, there is not enough good”. The filmmaker did not like the joke associated with his work, and he turned to Lera. But not by phone, but, as is customary among the stars, via Instagram:

“Lerochka, do they write these texts for you, or are you just a creature? Or did your mother bring you up badly? Or do you, in principle, do not understand who I am? Before opening your dirty mouth, carefully check the information you are saying. “

And away we go! Lera responded to the insults, and her husband Igor Makarov even summoned Sarik to speak like a man. At the same time, Andreasyan also found star defenders who were drawn into a scandal …

No sooner had this cauldron of passions cooled down than it boiled in another place. Olga Buzova suddenly called Vladimir Solovyov an abuser for no apparent reason. Of course, the TV presenter did not remain silent and walked around Buzovaya with a verbal skating rink: 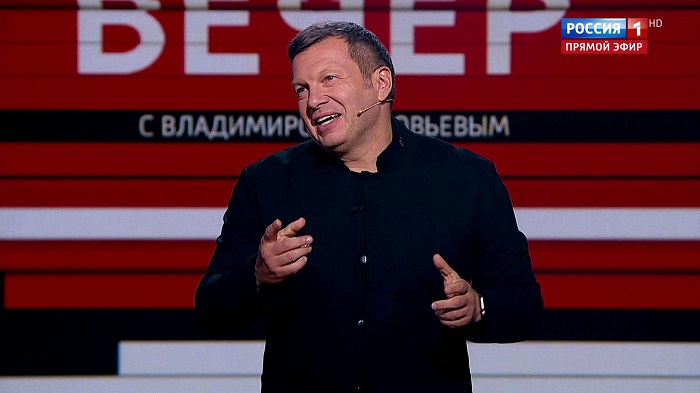 “She needs a good psychiatrist. She has Utkin’s disease – this is when a person uses words, the meaning of which he does not know. If she continues to talk about people in the same spirit, she will need a lawyer, because there will be a person who will not tolerate all this. “

The mention of Vasily Utkin is curious here. The famous sports commentator also quarreled with Solovyov. After that, the audience of his Internet channel expanded dramatically. Olga, by the way, is now also promoting an Internet project called “Buzova Show”. And, of course, the audience must be attracted to it …

As for Andreasyan, he runs two YouTube channels. And the scandal with Kudryavtseva, who has more than four million subscribers on Instagram, is certainly beneficial to the director.

All this suggests that the stars are beginning to swear in public (sometimes out of the blue!) For a reason. Maybe they even agree among themselves on mutually beneficial squabbles?

– The stars, of course, could agree on scandals. But it seems to me that all this happens spontaneously with them, – says the star promoter Sergey Lavrov. – They are all emotional, quick-tempered. Although, of course, any celebrity brawl attracts attention. Remember how much Sergei Shnurov and Iosif Prigozhin had a fight in their time? They watered each other so much on social networks! And Prigogine then doubled the number of subscribers. People like to delve into other people’s underwear, watch squabbles. As they say, we stock up on chips, nuts, beer and follow Instagram. Of course, people begin to subscribe to the participants in the quarrel en masse!

– But since there is such an effect, really no one has guessed to scandal deliberately, on a contractual basis?

– I think that very popular, media people simply don’t need to – to agree on scandals in advance. Although many suspect that, for example, the scandal between rapper Dzhigan and his wife Oksana Samoilova was planned. So maybe this kind of technology is sometimes used.

– Of course it is! And much more often than one might think, – says the founder of the All-Russian School of Bloggers Yevgeny Kutsueva. – This technology is nothing new at all. This is exactly how – through any conflict – the easiest way to include the attention of the audience of both one and the second participant in the Internet scandal.