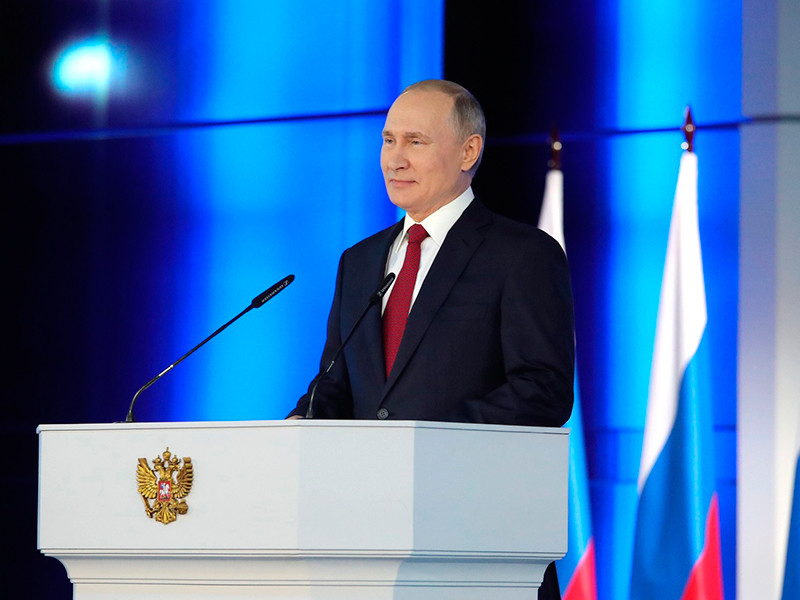 Russian President Vladimir Putin will read out a message to the Federal Assembly on April 21, his press secretary Dmitry Peskov said. The venue of the event has not yet been disclosed, the Mayak radio reports. Last year, the ceremony was held at the Manezh Central Exhibition Hall in Moscow, and in 2019 at Gostiny Dvor.

Peskov recalled that the Kremlin traditionally does not announce the topics that will be voiced in the message. Earlier, he said that the speech in the message will focus on “the socio-economic, technological and other development of the country,” and will certainly touch upon the theme of the upcoming elections to the State Duma.

In early March, Putin announced the start of preparing an annual message to the Federal Assembly. According to him, this work began in the presidential administration and in the government of the Russian Federation. Peskov then said that the message would be announced in person.

This week, the president will hold a meeting dedicated to the implementation of his last year’s message to the Federal Assembly, the Russia 1 TV channel reported. In 2020, a key point in Putin’s message was announced at the very end of the ceremony – a proposal to hold a popular vote to amend the Constitution. The plebiscite led to the approval of the amendments, one of which allows Putin to run for president for two more terms.

Sources of Kommersant believe that in a new message Putin may touch upon Russia’s success in the fight against coronavirus, and the message itself will certainly affect the election plans of the ruling party and its opponents.

The leader of the Communist Party of the Russian Federation, Gennady Zyuganov, said in mid-March that, according to rumors, Putin’s message to the Federal Assembly was “being rewritten for the fifth time.” “In my opinion, something serious is being prepared,” the politician said (quoted by RIA Novosti). Sources of RBC said that the message will contain “many social initiatives.”

Sources of Open Media, close to the government and the presidential administration, explained the postponement of the annual message by adjusting the pension reform.

“There was a real assessment of the pension reform in relation to the rating [власти]… This was the most severe blow to the credibility of the president, plus some funds have now been freed up [из-за роста смертности среди старшего поколения от коронавируса]… This will make it possible to return some benefits to certain categories of citizens, “said one of the interlocutors of the publication.

According to him, the president’s proposals on new measures to support low-income families, large families and the most vulnerable social strata are also expected. First Deputy Chairman of the State Duma Committee on Social Policy Mikhail Tarasenko suggested that the message might contain specific legislative proposals to bring the social part of the RF legislation in line with the amendments to the Constitution. Only after this, it is expected that the implementation in the form of laws of such widely advertised amendments as the indexation of pensions and an increase in assistance to families will begin.

Senator Sergei Leonov, in a conversation with Ura.Ru, did not rule out that Putin may announce in his message the indexation of pensions to working pensioners. The president’s press secretary said today that no decisions had been made on this score, but “the government was actively engaged in this topic, there are various considerations, the cabinet of ministers sent them to the president” (quoted by Interfax).

Political analyst Abbas Gallyamov, in his article for VTimes in mid-March, recalled that the message to the Federal Assembly is a speech to the elites, and one should hardly expect him to raise Putin’s rating.

“For a large majority of the population, he is no longer news. What he says is now much less watched; TV viewing figures confirm this. Disappointed and disaffected are the first to leave. President’s speeches, with rare exceptions, are now only a mechanism of communication with supporters. And the supporters are already for him, so there is nothing to add to the existing indicators of approval of the activity, “says Gallyamov’s column.