Putin joked about replacing fuel in Europe with ice skating 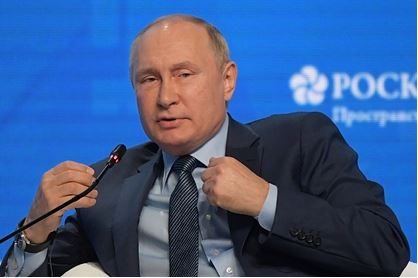 Russian President Vladimir Putin has suggested that Europeans will have to replace fuel with ice skating. The head of state joked that soon the Dutch would have to go to visit each other on skates to warm up, RIA Novosti reported.

During the plenary session of the Russian Energy Week forum, Putin noted that energy prices have skyrocketed due to the mistakes of European governments. The head of state cited the example of a court ruling in The Hague, according to which Royal Dutch Shell must reduce carbon dioxide emissions by 45 percent by 2030 compared to 2019 levels. According to the president, the situation could become worse if untrained people make decisions that affect the energy market.

Putin recalled that in the Middle Ages, the Dutch in cold weather moved along frozen rivers and canals on skates. “If this continues, then in Holland they will return to such a means of transportation, they will go to visit each other on skates, because it will be expensive to travel by cars, including electric ones. And they will skate not only in order to get from point A to point B, but in order to warm up, ”the president joked.

The head of state also promised that Russia will reach record gas deliveries by the end of the year to ensure the stability of the energy market. Putin noted that Russia fully complies with its contractual obligations and ensures uninterrupted gas supplies to Europe. According to him, the country is ready to provide partners with as much gas as they ask for.