Polina Lazareva: “When my grandfather was gone, we all grew up”

Polina has someone to compare herself with and someone else to grow up to … She still has a hard time going through the death of her grandfather, although 10 years have passed. And he keeps warm memories in his soul, because the famous actor loved her more than anything in the world!

Polina Lazareva plays at the Theater. Mayakovsky, acts in films. He sings songs as part of his group, and more recently he also conducts the TV show “In a secret to the whole world” on the TV channel “Russia-1”. That is, a rather versatile creative person. And as it turned out, an interesting conversationalist with an open mind.

– Polina, what is your very first childhood memory?

– Now it is already difficult to understand where I remember and where I came up with. But it is remembered how my grandfather took me from kindergarten: there was an endless, as it seemed to me then, path, and when my grandfather appeared at the end of it, I ran towards him and jumped into his open arms.

– What kind of grandfather was Alexander Sergeevich?

– Infinitely loving. Grandpa has been gone for 10 years, but I think about him every day. My grandfather just went crazy as soon as I was brought from the hospital. It was the subject of ridicule by others. Whatever she did, my grandfather believed that it was absolutely brilliant and there was no one more talented and more capable, more beautiful and smarter than me.

– When did you realize that everything, childhood is over?

– If it’s not serious when I found out that my mother is expecting a baby. I thought that now all the attention of my adoring grandparents will switch to an incomprehensible screaming baby, whom I, by the way, did not ask for. I was quite happy that the whole world revolves around me … But seriously, when my grandfather was gone. Then we all somehow matured a lot.

– There are so many actors in your family! Did it somehow affect your upbringing?

– More likely, it turned out that everyone always worked hard, there was no one to leave me with and I had to carry everywhere with me. From a pedagogical point of view, it is probably wrong that I did not have any regime. Sometimes, closer to the night the waiters came up to the parents and said: “If you suddenly look for your daughter, she sleeps under that table over there.” They felt ashamed, they grabbed me and ran home.

– Didn’t their grandparents call them to order?

– Oh, they themselves were the same! I remember how I went with my grandmother (meaning Svetlana Nemolyaeva. – Ed.) on all tours, went to performances. Artists, make-up artists, dressers took turns with me. I spent time with my dad in the same way. There were always a lot of people around, I communicated with wonderful people, absorbed something …

– Didn’t you try to rebel against such a way of life? For example, in adolescence?

– And I probably never had such an age – with scandals and confrontation. Nobody imposed their opinion on me so that I could deny it in the impulses of youthful maximalism. My parents did not dictate how I should live. They could advise, but I got the impression that in global issues of choice, the last word always remained with me: where to enter, with whom to communicate … That is, we have always been amicable. And they praised me often! I am very unsure of myself and without abundant praise I do not know what would have turned out of me …

– What is it like to act in films with dad, go on stage with your grandmother?

– They are both outstanding artists and talented partners. Yes, I even worked with my dad and my grandmother at the same time! For example, in the series “Diplomat” (now the second season is being filmed. – Ed.). There weren’t many scenes together in the first season, but when they happened, I was happy and had fun. Let me explain why: I need some time to get used to the site. And when your family is near, it is very comfortable with them!

– Relatives probably come to your performances. Are you worried, nervous, discouraged, embarrassed?

– And I’m worried and nervous. But I’m not discouraging it. My relatives are all tactful people and will never say an extra word that can offend or demotivate. By the way, my mother, although she is not an actress, always understands everything well and finds words very accurate.

– And my grandmother once proudly told that you taught her to use the tablet!

– Yes, she plays solitaire on it! Sometimes I can send her some videos or photos, she looks at them. And even links can open. But once in a while it is not necessary. With gadgets, grandmother is still on “you”.

– And what does she teach you?

– I try to learn from her experience, attitude to the profession, skill. The grandmother knows how to tell very funny. And the way she owns the hall, how easily she improvises, jokes, how free she is, I am amazed every time! We work at the Mayakovsky Theater, together we are engaged in three performances (“The Importance of Being Earnest”, “Mad Money”, “Talents and Admirers” – Ed.). And she, of course, is an amazing, very wise woman. I see how my grandmother is still working on herself.

– Did you doubt your choice of profession?

– Of course! Moreover, dad and grandfather discouraged me. But my grandmother, on the contrary, from childhood sang, holding me in her arms: “We will be artists, we will be artists!” But when I finally decided to enter GITIS, it was my grandfather who studied with me. He had obvious teaching talent. Even with such a tree clamped as I was, he was able to make the program. So my admission is his merit.

– And someone will say: a well-known surname …

– Oh, this is a topic that haunts me! Whatever one may say, they will consider that if Lazareva, then a thief. At first I was nervous about this, squeezed. And now I understand that there is no getting away from this and that we have to put up with it. Surname, surname, but it’s for me to work, to go on stage and prove my worth to me. You just need to grow, improve.

– But you could be arrogant.

– Oh, hardly. After college, for example, I was very embarrassed and wanted to go out the window when I was introduced as an actress. How can you talk about me like that when there is Inna Mikhailovna Churikova, there is my grandmother … Now I’m getting used to it a little, but still I can’t say about myself: I’m an actress! 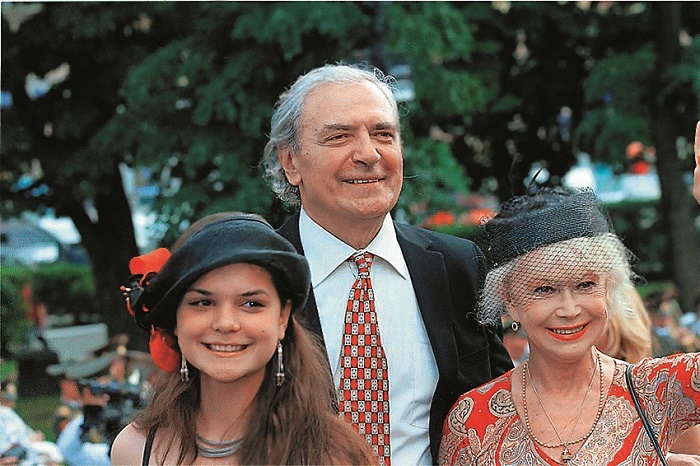 WHAT DO YOU NEED FOR HAPPINESS?

– Theater. Mayakovsky has been dear to you since childhood. But dad, for example, works at Lenkom. Did you have a choice?

– They called me … I didn’t dream of a theater, and even more so I didn’t want to go to theaters occupied by my relatives. During the downtime, Evgenia Pavlovna Simonova suggested trying out in Mayakovka for the play A Month in the Countryside. I wanted to correctly refuse, I consulted with my grandfather, and he said: “To refuse just because someone might think something is wrong. We must take the chance – and tear the ribbon! ” I tried it – they took it. I rehearsed, rehearsed and imperceptibly found myself in the troupe.

– Now they also began to work on television. How do you like the new experience?

– Yes, we have already filmed two programs in Zanzibar, one in Rostov. Of course, this is completely new to me. And everything is much more complicated than I expected. Previously, it seemed that this was not a job, but just a dream: you drive, travel, you also get paid for it. But it didn’t work out that way, it was even scary from habit. But then I got involved, I liked it.

– You have a great idea of ​​what it is like to live with a male actor. Have you ever sworn to yourself “husband-actor – never!”?

– Yes, in fact, the profession does not matter. The main thing is that the person is good, and then we’ll figure it out.

– I think you always smile. Is there anything that might be upsetting?

– Illness or care of loved ones. By and large, nothing else should be scary. We must learn to find the right attitude and the right reaction to any problem. I am actively working on this. But something insignificant can upset me: I read some malicious comment and I go around, I think, I’m angry with myself … Why waste time on this, what will change? .. Do you know, with my reflective character I cope with a lot labor.

– What makes you happy?

– Sometimes it seems to me that the mood depends on whether it is a sunny day or not. In the summer I am always in a good mood and happy. And when it’s winter or autumn and it’s dark all the time … No, the most important thing is that my family and friends are healthy. And I would like to take place in the profession, feel confident and be a good person.