Mitch Martinson, a police officer from Plymouth, Minnesota, USA, did not expect his next shift to make him feel like a wildlife expert. 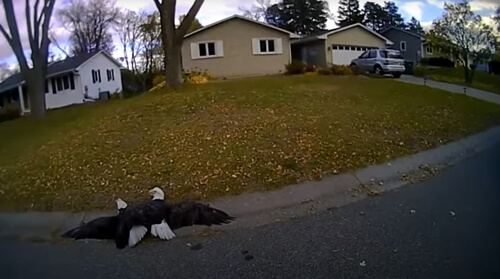 A policeman received a call about two bald eagles engaging in an epic battle at a crossroads. Arriving at the scene, Mitch made sure that the fight was not a joke, and the birds literally stuck together. At this point, the officer had to break his head – he knows all the necessary actions of the police when settling conflicts, but here they would hardly help.

Then Mitch remembered a certain TV show about wildlife, which said that fighting birds can be calmed by covering their heads. True, while the policeman was preparing to put this plan into action, the passions calmed down by themselves – the eagles simply flew in different directions. It is believed that the conflict arose due to the fact that the birds did not divide the territory. It remains to be hoped that from now on everything will happen without such dramatic disputes.

Possum became the object of attention of the unkind magpie