Plastic is a threat to life

Recently in the ocean, they discovered the emergence of new life systems on giant floating islands made of plastic debris.

Scientists have named the new ecosystem of thousands of species of bacteria and microorganisms, including pathogens, the plastisphere.

The Ministry of Natural Resources sent to the Ministry of Industry and Trade a proposal to ban 28 types of non-recyclable goods and plastic packaging in Russia. We are talking about plastic bags, cotton swabs, plastic dishes, colored plastic bottles, egg packaging, etc. Do we really need to give up familiar and convenient things?

Most of this list of 28 “forbidden” plastic items and packaging can be easily replaced with cardboard, glass and wooden counterparts. We have not found a replacement so far only for plastic capsules for coffee in vending machines.

But it is very difficult or impossible to recycle such plastic. When plastic is burned in landfills or garbage plants, carcinogenic compounds are formed that can cause the development of cancer in people living nearby.

Opponents of replacing plastic containers with cardboard ones say about new costs for trade and that all this will again hit the consumer’s pocket. In this regard, the Consumers ‘Union proposed to return the buyers’ containers into circulation. There was a time in the USSR when people went for milk, kefir and kvass with their own glass bottles. It seems that everything well-forgotten old is returning to square one, and a good old string bag will soon replace the plastic bag that does not decompose in earth and water. By the way, it is convenient to store vegetables and fruits in it: this way they do not deteriorate longer.

The program “Hand over the bottles – get money” is also going to be returned. Benefits for producers and ecology.

60 MILLION TONS OF WASTE BURGED INTO THE GROUND

The costs and harm from plastic are much greater than the benefits and ephemeral reduction in the price of goods, they assure the Ministry of Natural Resources. The head of the department, Alexander Kozlov, cited statistics: now 60 million tons of solid municipal waste per year, more than 94% of all waste in Russia, including plastic, “goes into the pits and remains for our children.”

Our descendants will inherit a garbage dump instead of a planet and an ocean full of floating plastic bags. After all, garbage from the ground during the rains is washed out into the rivers, and from there it goes into the seas and other bodies of water.

Already, the Great Pacific Garbage Patch is the size of France. Two more giant garbage spots of bags and plastic debris, comparable in area to medium-sized states, float in the Atlantic Ocean, and one more in the Indian Ocean.

And in them gradually, as we have already said, a new life is born. 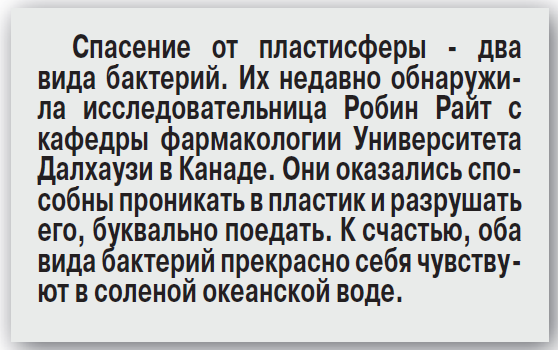 WHAT IS DANGEROUS IN PLASTISPHERE AND MICROPLASTICS?

According to experts, from year to year the mass of waste floating in water increases by 10 million tons. About 80% of the debris in the water is plastic. It is swallowed and killed by this sea birds, turtles and dolphins. Plastic debris is found in the stomachs of fish. But we eat them. Through the food chain, microplastics particles also enter human organisms.

At the same time, plastic waste in rivers, seas and oceans is crushed into particles and turns into a kind of accumulator of poisons, absorbing them like a sponge. Microplastics have been shown to absorb toxins such as PCBs and pesticides. Scientists say microplastics have mutational effects. And what mutations it will lead to in animals and humans is anyone’s guess.

“We are now conducting a series of experiments feeding laboratory fish the polyethylene that was extracted from the water in the port of San Diego. We want to see if the poisons will accumulate in the body and if the fish show signs of poisoning, ”a scientist from the University of California Chelsea Rockman told the American media.

But the same Dutch scientists who called the new ecosystem on garbage spots in the ocean a plastisphere discovered another alarming circumstance. It turned out that colonies of bacteria belonging to the genus Vibrios are often found on plastic waste. Like the causative agent of cholera, many of these microorganisms are dangerous to fish, molluscs, crustaceans, mammals and – humans. It turns out that we, with our own hands, with our plastic waste, are preparing ourselves a new biological bomb in the ocean, which can explode at any moment.

To reduce the chances of such a scenario developing, the Ministry of Natural Resources has prepared a bill obliging to send for recycling all the garbage with which it can be done. By 2030, the ministry hopes to increase the share of recyclable packaging in the Russian market to 85%. The bill will be submitted to the State Duma in the near future.