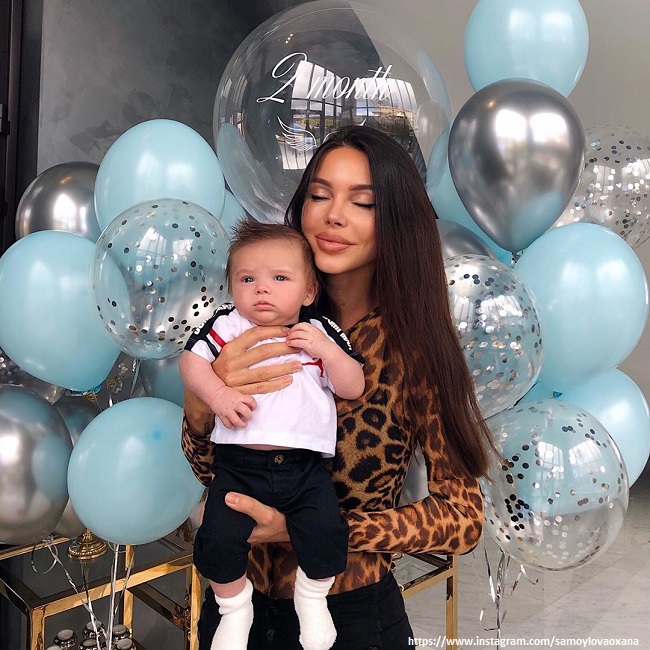 The model admitted that she took birth control pills after the birth of three daughters from rapper Dzhigan (Denis Ustimenko-Weinstein): Ariela, Leia and Maya. The fourth pregnancy came as a surprise to the business woman.

Today Oksana revealed the details of the birth of a boy in Miami. Samoilova found out the gender of the heir when in the clinic they brought her a huge box, where there were blue balls. “About 5 days before that, we learned that I was pregnant. The term was 12-14 weeks. There was severe placental abruption, hematomas, and so on. Then I lay for almost a month, and that was the moment when we stayed in America, until the doctors allowed us to fly“, – explained the young mother.

She enjoyed the warm weather, sunbathing and experimenting with stylish bikinis. Oksana put on fashionable swimwear and went out to the ocean. “I walked with might and main, nothing foreshadowed the birth of David. In Russia, the fourth cesarean is done at the 36th – 38th week. In America, they told me: “We walk while we walk.” The planned operation was scheduled for the 40th week. It’s February 20th“, – remembers instadiva.

At about 10 pm on February 17, she began to have labor pains. However, the model did not attach any importance to this. “I thought, it seems to me. Actually, I’m not going to give birth. So suddenly. At 4 o’clock in the morning I was already rushing behind the wheel with powerful contractions to the hospital“, – Instadiva smiled. The doctors immediately provided her with the necessary assistance.

“They put me in the examination room. The problem was that there was an emergency caesarean section – and we hadn’t ordered blood from the blood bank. Without this, the operation cannot be performed. As a result, I still lay there until 10 am with contractions. You know, such a maximum combo of pain, when there were contractions, and then COP, ”- explained Oksana.

By the time the mother of many children was brought to the operating room, she had not slept for about 26 hours. “I was just terribly tired, and I was just unrealistically scared. I was so thrashed that I was thrown on the operating table. Then the operation. Davidik was born, he was processed. They literally put it to my chest for a minute and took away somewhere. I was bad at that time and did not understand what happened“, – Samoilova admitted.

She had to wait for the moment of meeting with David. “When I woke up, they didn’t bring him either. They said that he was in the intensive care unit, that there were some suspicions and they needed to be diagnosed. Take tests and so on. So the whole day passed. I could not walk and, accordingly, I could not go to his department either. It was the longest day of my life“, – said the rapper’s wife.

He himself went to his newborn son, but they did not say anything intelligible to the star dad. David was lying under a variety of sensors with an oxygen tube, catheters in a separate box and under supervision. Oksana had to recover from the operation. “I was sewn up, transported to the recovery ward, this is a type of intensive care unit. I stayed there for a couple of hours. Then he was transferred to the usual one. They did not bring Davidik, they answered something unintelligible. I fell asleep“, – said the popular mother.

When she was able to get up on her own, she went to the department to her son. “This was our first full-fledged meeting since birth. He was so tiny and poor. I was lying there alone, covered in some sort of tubes. God, how I sobbed! And no one said what exactly happened to him, what their suspicions were, when he could be taken to the ward“, – Instadiva was upset. She was allowed to sit with her son for 15 minutes.

According to the Internet star, there are other procedures in American maternity hospitals, different from Russian ones. “You don’t decide anything, the hospital and the doctors decide everything. While the child is on the territory of the hospital, she is responsible for him. They are not even allowed to walk with a child in their arms. Only sitting or in a wheelchair“, – said Oksana. She showed tender shots of holding a baby wrapped in an envelope.

The thought of a fifth child does not make her happy. “Do I still want to be pregnant? Not! This, of course, everything is beautiful and cute, but I like children in my arms much more than in my stomach.“, – noted Samolova.