October 1917: Secrets of the Great Revolution

104 years have passed since the time of the grandiose historical events in Russia that shook the world. The Great October Socialist Revolution, as it was called in the USSR, has been increasingly called the October Revolution for 30 years.

In fact, there was both. In fact, the events of a seemingly ordinary government coup eventually became a great revolution that destroyed the way of life that had been created for centuries in Russia. And greatness is meant here not in a positive sense, but in the sense of the scale and grandeur of events with rivers of blood and tears, war and famine, devastation, the suffering of hundreds of millions of people, the destruction of some states and the creation of new ones. All this originates in the Petrograd events of October 25-26 according to the then chronology, or November 7-8 according to the present.

The coup was prepared by TROTSKY

Generations of Soviet people born before 1991 were taught according to Stalin’s textbooks, where it was clearly written: the Great October Socialist Revolution was prepared and accomplished by V.I. Lenin and the Bolshevik Party led by him.

As for the party, it is almost true, although the Left Social Revolutionaries, later destroyed by the Bolsheviks, also took part in the events. But about the Leninist leadership – a clear overkill. Even according to official Soviet historiography, Vladimir Ulyanov (Lenin) at the time of preparation for the uprising and during its conduct was underground, in an illegal position under the threat of arrest. Therefore, with all his desire, he could not prepare the overthrow of the Provisional Government and the establishment of Soviet power. He only wrote articles and sent out instructions, to which they were far from always heeded.

And who was the head of the Petrosovet? Comrade Trotsky Lev Davidovich, a revolutionary and journalist, just a month and a half before that was released on bail from another arrest by the Provisional Government (on his own head!).

Trotsky had the experience of a practical revolution back in 1905-1906, then he also led the uprisings in St. Petersburg and Moscow, and then fled abroad. In 1917, both the Bolsheviks and the Left Socialist-Revolutionaries were dear to him, but most of all this adventurer was dear to the power with its capabilities and money.

It was the strong-willed and energetic extremist Trotsky who organized that day of the armed coup on November 7-8, 1917, when the illegal government, formed by the II All-Russian Congress of Soviets, came to power. There, at that congress, Lenin, disguised as a simple hard worker, had already come running, without a mustache and beard, so as not to let Trotsky alone reap the fruits of an unprecedented, fantastic victory over the legitimate government in Russia.

And Trotsky, having frankly told Lenin that “a Jew cannot head the government in Russia,” gave the leadership of further events to Vladimir Ilyich.

So Lenin became the genius of the revolution, its leader, leader and inspirer, which was then actively cultivated by Stalin, who fiercely hated Trotsky.

WHAT PREPARED THE REVOLUTION?

All is well known about the fatigue of the Russian people from the First World War, about the insoluble problems of power after the abdication of the tsar. Our people have heard much less about the crisis of governance in the country, which allowed Trotsky to raise the power that was lying in October 1917 on the pavement of Petrograd.

Literally a month before the coup in Russia, a Democratic Conference was convened with the participation of all political forces (except for the Bolshevik extremists), and three weeks before the coup on November 7-8, another coalition government (consisting of representatives of several parties, but without the Bolsheviks) was created, which at that time was headed by the head of the Russian republic A.F. Kerensky. A week before the coup in Petrograd, the Pre-Parliament began sessions, which the Bolsheviks, already about to seize power, ignored.

But all the new authorities, which had existed for less than a month, were very weak and disorganized. Conversely, the organizational talent of Leon Trotsky, who clearly arranged the work of his Petrograd Soviet, allowed the latter to become almost a dictatorial governing body in the capital of Russia. It remained to seize the supreme power only formally, which Trotsky brilliantly carried out with the help of him and the All-Russian Revolutionary Committee (Military Revolutionary Committee) created by him.

And here’s what is important and interesting: the events of the night of November 7-8, 1917, when the Winter Palace was seized with the ministers of the Provisional Government sitting there, the people and even politicians of Russia then attached little importance to. Everyone was looking forward to the main event of the season – the mandatory elections to the Constituent Assembly. It was it that was supposed to define a new form of government in Russia. Therefore, until the imminent transfer of power to the “constituent assembly”, the people almost did not give a damn who temporarily ruled there in Petrograd – the annoying balabol Kerensky or the fiery orators promising peace and land to everyone, Trotsky and Lenin.

And it was precisely with this delusion about the “constituent assembly” that the Bolsheviks, greedily clinging to the helm of ruling Russia, soon dealt with. They simply dispersed the Constituent Assembly after the elections. This actually announced that the country was now ruled by the party of Lenin’s comrades – Trotsky.

EXTERNAL CAUSES OF THE OCTOBER CUTTLE

Already today, some serious historians are proving one interesting version, which reveals, among other things, a secret: why did the coup happen on the night of October 25-26 according to the old calendar style?

Experts proceed from the almost documented fact that Ulyanov (Lenin), who was passed in a sealed carriage through the territory of belligerent Germany to Russia, was following the secret instructions of the German General Staff. At the same time, the goal of the Kaiser’s intelligence was simple: to withdraw Russia from the war, because the Kaiser could no longer fight on two fronts (US troops landed in Europe to help England and France) …

And there was no way to come to an agreement with the Provisional Government of Russia – the slogan “War to a victorious end” reigned there. At the same time, Kerensky’s intelligence and secret diplomacy achieved impressive success: they persuaded the main German ally, Austria-Hungary, to a separate peace.

On October 26, 1917 (November 8, new style) in the Polish Lodz, the government delegation of Austria-Hungary was to meet with the Minister of Foreign Affairs of the Provisional Government of the Russian Republic and sign the documents on Vienna’s surrender. Two weeks later, Bulgaria was preparing to sign a similar document …

The German General Staff learned about the secret plans of the allies and demanded urgent action from Lenin to disrupt everything. With a cry “Delay is like death!” the leader of the proletariat put pressure on Trotsky, who, in turn, instructed the revolutionary bandit henchmen Podvoisky and Antonov-Ovseenko to organize the arrest of the Provisional Government.

If you believe that Germany needed to close the Eastern Front in Russia, then this important external reason for the coup looks convincing.

Although, of course, the main reason for the tragic, but great in meaning of the events of November 7-8, 1917 is the irrepressible thirst for power over the richest country in the world of a handful of political adventurers who deceived the peasants and workers who initially supported them. 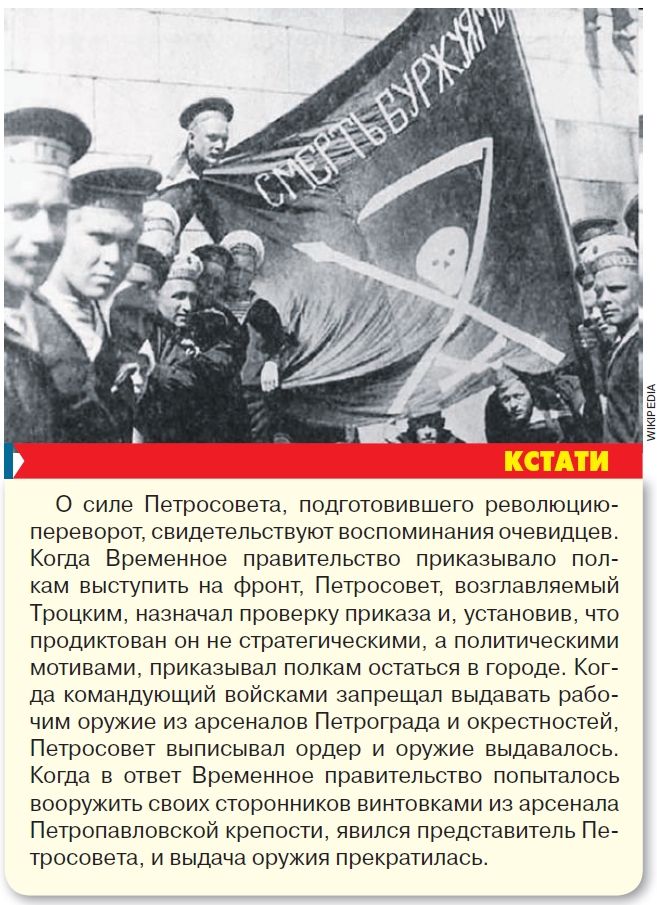