On her Instagram page, KVN star Gerra Gigashvilli commented on the coronavirus pandemic, as well as told what the situation with quarantine in Russia is. According to him, the Russians do not adhere to the rules and continue to live as if nothing in the world going on. Gigashvilli wrote that the playgrounds are crowded with parents and children. The celebrity noted that if he were an official, he would punish such people, since they endanger their health and the health of other people.

“No revolution is possible in Russia. People cannot unite even in the fight against the disease. Playgrounds are full of people with children. Schoolchildren are playing football in full boxes. If I were the mayor, I would severely punish my parents for this. You fucking don't understand that a possible epidemic will affect, if not your health, then your future salaries? That nothing will work while the virus walks down the street? You can bear it easily. You’re young, but what will happen to others – fuck r, ”writes KVNshchik. He also wrote that the Russians should think about the fact that when they get sick, then there will be nobody to help them. After all, hospitals can be crowded. “You need to be an imbecile in order not to understand that you will be sucked out with some unexpected trauma or illness due to the possible absence of hospital beds … Imagine that you did not go out and save a person’s life. Not mine, ”Gigashvili wrote. Replyua.net 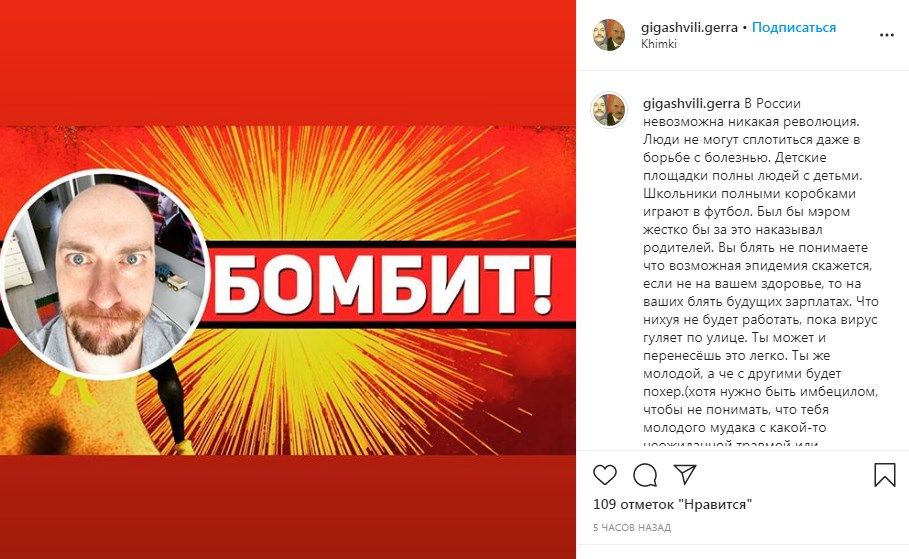