The population of the Earth is increasing every year, and this trend is predicted for many more decades. At the same time, the shortage of basic foodstuffs is getting worse. This makes dairy farming an increasingly profitable branch of agriculture, in which economists note the constant rise in prices for the products it produces. The active introduction of new technologies that scientists are constantly presenting allows to increase profitability and get the maximum profit with minimum labor costs.

The experience of applying innovative developments shows that an increase in milk yield, offspring on a farm and, as a result, an increase in profitability improves after a month of using a competent, modern and systematic approach. After the full-scale application of new technologies, the net income of the farm increases by 54%, and sometimes by 70%.

Reducing human labor costs has a positive effect on the entire process: it eliminates systematic errors that personnel periodically make, reduces the time spent on all stages of caring for animals and farm space, and also eliminates the need to pay monthly labor costs.

Automated robots are installed at all stages and are used for:

At the moment, all these processes can be successfully performed by automated systems. The most advanced equipment is timer-driven, so human intervention is not necessary even to periodically run these systems.

Now development scientists are working on farm projects that will be remotely managed without the direct presence of a person on the spot. In the online mode, it would be possible to correct all possible failures or solve non-standard situations. Although practice shows that with the active introduction of full automation, the number of problematic issues decreases sharply.

The use of robots instead of humans could dramatically increase the number of livestock farms around the world, and primarily in places remote from civilization with the best ecology. The first complete kits for self-farming should be on the market as early as 2020.

New breeds are being actively developed for animal husbandry, applying all the advanced experience accumulated by scientists. Geneticists do not stop developing new dairy and meat and dairy breeds that are ahead of their predecessors in all respects. 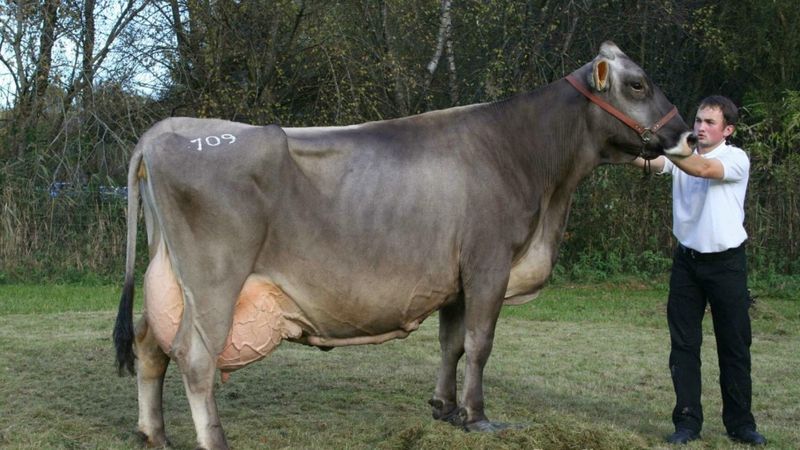 Genetic engineering technologies have allowed experiments with the controlled development of udder mastitis without the pain and deterioration of the health of the cow. After the growth of the glandular tissue, the process stops, but milk production remains at the same level.

There are also disadvantages in this: if a cow with an increased level of milk yield is not provided with enhanced nutrition, then the milk will worsen its performance by more than 2 times, and the animal may soon get exhaustion of the whole body. But scientists believe that such a development is the future. So far, many animal rights organizations have been active opponents of such innovations. 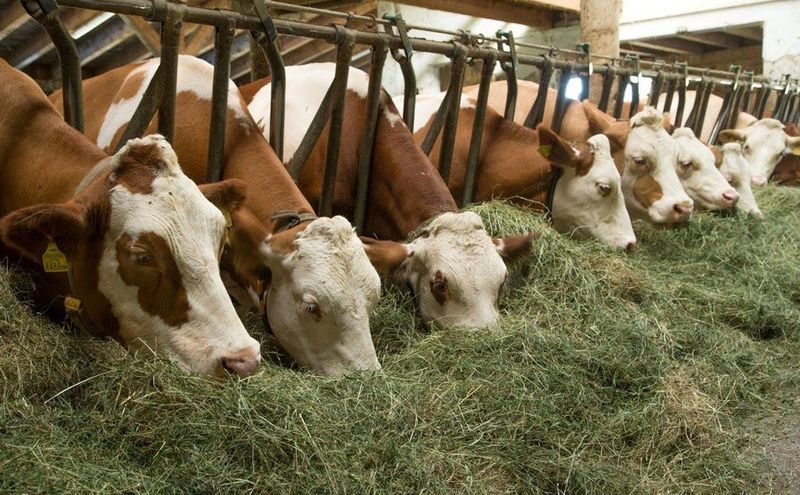 Some biologists have gone even further and are working on the possibility of using glandular tissue in vitro – outside the body of the animal. This would take the dairy industry to a completely new level, previously featured only in science fiction literature.

Over the past decade, the approach to feeding has changed significantly in dairy and beef farming. Until recently, the priority was the use of hormones that affect the lactation characteristics of animals and the rapid growth of meat.

Now experts propose to introduce at the enterprise a unified functional system for managing the composition and quality of feed. Forage crops are carefully selected in terms of growing area and efficiency of use in animal husbandry.

Harvesting crops begins at a clearly defined moment when the vegetation indicators and the mass of food elements are in the most balanced state. The main base product is silage. New developments have made it possible to store it in such a way as to ensure the preservation of the maximum amount of nutrients, useful microelements and vitamins in it. Preservation takes place so that loss of nutritional value is minimized. 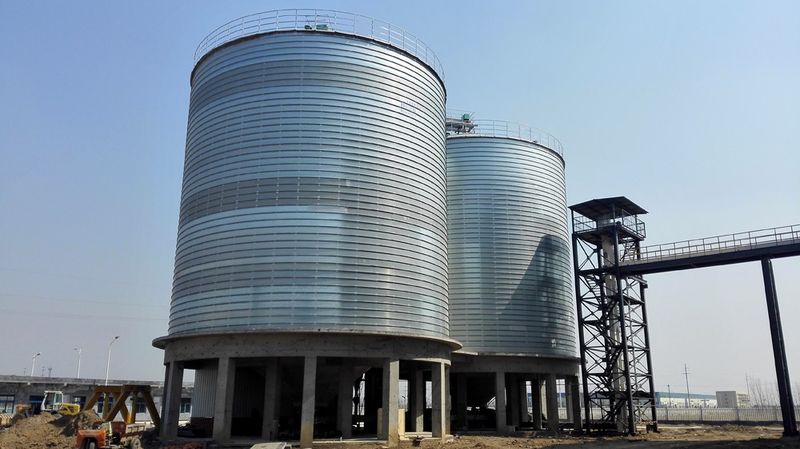 The most modern technology provides for the storage of silage with a given density in plastic bags. This allows you to maintain the required level of moisture without waterlogging the feed and preventing the development of pathogens in it. A vacuum is created inside the bag, after which it is reliably sealed on both sides. The small amount of oxygen remaining in the silage promotes gradual fermentation of the silage, thereby maintaining its original quality.

Automatic preparation of mixtures directly on the farm, where the cows are kept, allows you to make a gradual transition to nutrition, due to the special conditions of the animals: pregnancy, lactation or dryness.

Another innovation in the production of silage mixtures has made it possible to abandon the preservatives that were previously used when storing feed. It is known that these chemicals not only caused deterioration in the condition of the cows themselves, but also more often led to deformities in the offspring. In addition, preservatives influenced the characteristics of milk, reducing its fat content and impairing its electrical conductivity.

The new technology provides a special UV stabilizer in the film of the silage storage bags. This method manages to achieve several positive points at once:

The total volume loss during such storage is only 2-3% against the standard 28-31%.

The milking process takes up to 50% of the time spent on ensuring the functioning of livestock complexes. The automation of this process began many decades ago, but it is only now that automatic milking systems have become fully intelligent.

The technology provides for the transfer of cows for milking to a special milking parlor, where milk can be effectively removed from the animals. Intelligent systems allow:

With these systems, the milk is mechanically filtered and the milking clusters hygienically cleaned immediately after each milking. 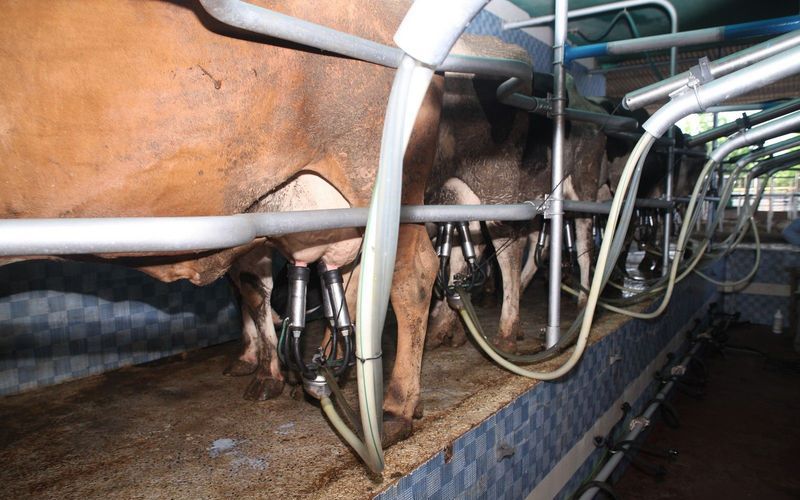 These technologies make it possible to determine which of the cows will give more milk with two milking times, and which ones with three milking times, since this is a purely individual characteristic of each animal at a certain stage of life.

New technologies in animal husbandry have affected not only cattle keeping, but also methods of transferring finished products. Previously, immediately after collection, milk was delivered to dairies, where it underwent further multi-stage processing.

Now the first stage of preparation is carried out immediately after the product leaves the milking parlor. Immediately after passing through mechanical filters, the raw material is cooled by means of modern cooling units to a temperature at which the development of all microorganisms is suspended (4 ° C). 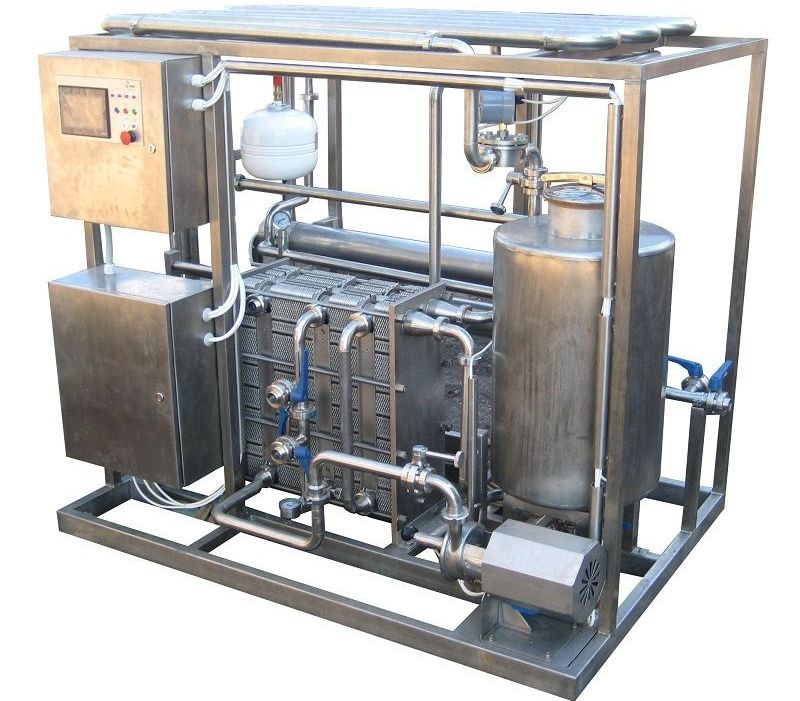 This makes it possible to obtain high-quality and safe raw materials that meet all sanitary and hygienic standards. In addition, the likelihood of quality loss is reduced already during transportation to the place of further processing.

Hunting in animal husbandry is the period when females produce an egg and the cow is ready for fertilization. Precise technology, which is automatically able to determine this period, increases the profitability and profit of the farm.

The visual examinations, which are often used to determine this condition in a cow, are often error-prone. Since the duration of the hunt for each animal is individual, a large amount of time is required for an accurate determination. Now the issue is being resolved without the participation of a veterinarian. Automated systems with pedometers, special collar attachments and ear tags with electrodes have such undeniable advantages:

For a complete analysis of the condition, no more than half an hour a day is required. This can happen without unnecessary stress for the cow while feeding or resting the animal.

Another technology, which is actively being implemented at zoological farms in the USA and Europe, provides an increase in the comfort of keeping animals, was presented by German livestock breeders. It is a pendulum brush that improves health and yields.

When a cow touches this device, it begins to rotate at a pace that is most pleasing to the animal. The brush has several degrees of freedom, so it swings in different directions. The whole body of the animal can be processed in this way. 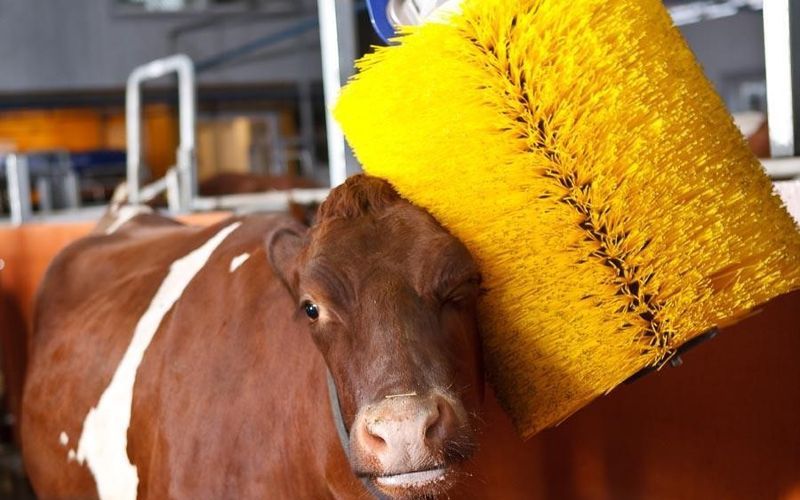 The main functions of pendulum brushes:

The new generation of these devices consumes much less electricity compared to older mechanisms that perform similar functions. In addition, they have such a length and stiffness of the bristles that they cannot injure the surface of the body of cattle.

Tests have repeatedly confirmed that the use of this simple mechanism leads to an increase in milk yield in animals of the second and subsequent lactations up to almost 1 l / day from each cow. In addition, the incidence of mastitis after using the pendulum brush is minimized. The development has been adopted by all leading livestock breeders and is rapidly spreading around the world.

Modern technologies offer increasingly successful and cost-effective technologies and developments for the livestock sector. It is possible that in a couple of decades this industry is transforming so much that it will be difficult to recognize the features and approaches we are used to.