Motion expert "Vote" after receiving threats, he secretly moved to Nizhny Novgorod, but he was overtaken there too (PHOTOS) 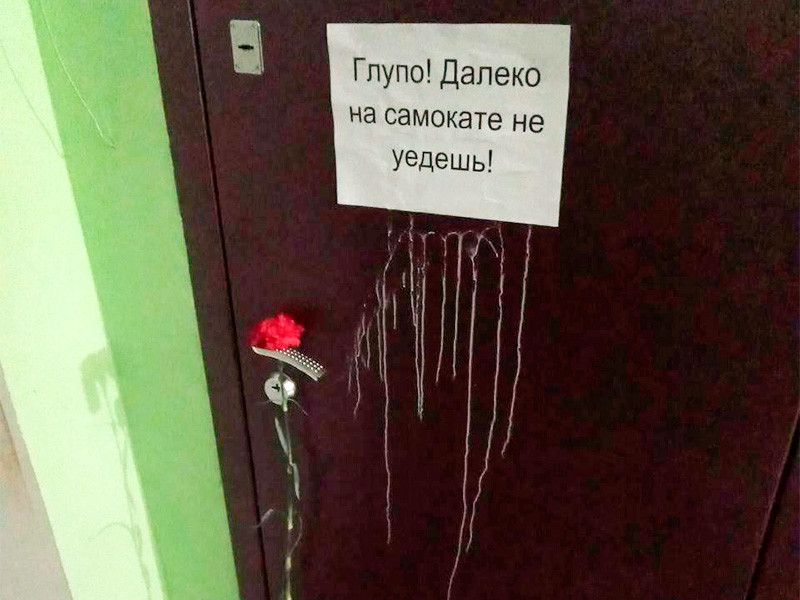 The expert of the observer movement “Golos” Vasily Vaisenberg, who spoke at the end of March about the threats due to the article on the income of the head of the electoral commission of the Yamal-Nenets Autonomous Okrug, continued to receive threats even after moving to another city.

“And we continue the epic with threats. This time they did not regret glue, paper and as many as two carnations were brought. In the evening they returned from a walk, and on the door there is a note:” Stupid! You can’t go far on a scooter! “- Weissenberg said on his Facebook.

He noted that about 10 days ago he moved with his family from Moscow to Nizhny Novgorod, without advertising it and taking “reasonable security measures”: “they changed the phones, turned off the old ones, pulled out the SIM cards, used the VPN in a new place, etc.” “But after a week we were found and shown that they were closely monitoring our movements,” Weissenberg said. According to him, the district police officer “promised to come in and see what and how,” but has not yet come.

On March 18, the website of the Golos movement published an article “The salary of the head of the Yamal election commission is higher than that of the governor.” It says that the head of the election commission in Yamal, Andrei Gibert, according to the declaration for 2019, received about 33 million rubles, becoming the highest paid official in Yamal at the end of that year. His income was higher than that of the governor Dmitry Artyukhov, who received “only 30 million rubles.”

On March 25, Weissenberg said that an unknown person called his wife with burr and demanded that the article about Gibert be removed, and that he should also make a public apology, otherwise the son of the couple, Misha, would “fall off the scooter.” On that day, the boy rode a scooter to the kindergarten. The expert’s wife filed a complaint with the police about the threats.

Weissenberg noted that he did not bring anything new in his article; the media wrote about Gibert’s annual income of 33 million in the summer of 2020. A spokeswoman for the Yamalo-Nenets Autonomous Okrug, in a comment to Znak.com, suggested that Weissenberg announced threats against his family because his article “did not receive any reaction from the public,” but the topic needs to be “developed somehow.”

“This is a continuation of the promotion of this fake story, the members of the commission cannot have anything to do with this. Andrey Nikolaevich [Гиберт]in spite of his income, he is a very modest person and it is unusual for him, he will not even think of it, “said the interlocutor of the publication. In her opinion, the election commission regards the situation as” the next intrigues of “partners” whose addresses do not want to use profanity. “Gibert has been the head of the Yamalo-Nenets Autonomous Okrug since 1994. On March 17, 2021, he was again recommended to the commission.

Weissenberg suggested that “one of Gibert’s enemies” is using the text about him “in the internal elite struggle” and is threatening the family of the Golos expert. On March 26, Weissenberg announced that he had received a message with a new threat. It said: “I did it in vain. We wanted to resolve it normally. Now do not be offended.” Probably, it was about the fact that Weissenberg made public the fact of receiving threats.