Mordva is in 9th place in terms of numbers among all the peoples living on the territory of modern Russia. The Mordovian people live mainly in the Volga region and in the Central Federal District. Only 1/3 lives in the Mordovian Republic, and the rest are settled in other regions of the Russian Federation. For tourists and guests of Mordovia, Mordovian traditions often become a discovery, which remove the cover from the depths of the history and customs of this ethnic group. 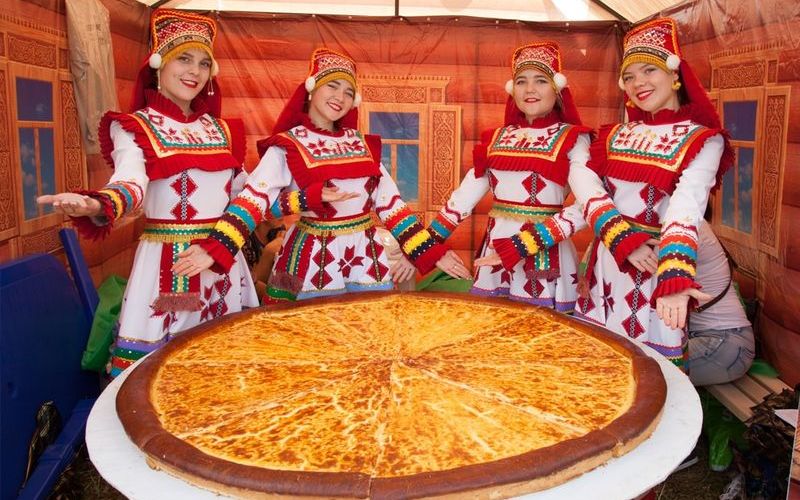 Mordva consists of two main groups: Erzya and Moksha. Each of them has unique linguistic features, but still they are combined into a common Mordovian language. They have several interesting features for a Russian person. For example, prefixes are completely absent, words do not change by gender, and there are only two declensions. In most words, the stress falls on the first syllable, which gives the dialect a special rhythm.

But by ear it is noticeable that this language is not very far from Russian, because it has a lot of borrowings from Russian speech, as well as from Iranian and Baltic. Despite the fact that the Mordovians protect their language environment, everyone here speaks excellent Russian, even the official documentation is duplicated in two languages. Therefore, tourists always feel comfortable in such a bilingual environment.

Mordovian culture and traditions include national costumes, which can still be seen in the republic during holidays and folk rituals.

In previous centuries, Moksha and Erzya dressed differently. Mokshan women dressed in trousers with wide, comfortable trousers and a shirt, which was belted at the waist. Headdresses were special shawls or scarves, they were twisted like a Cheremis turban. 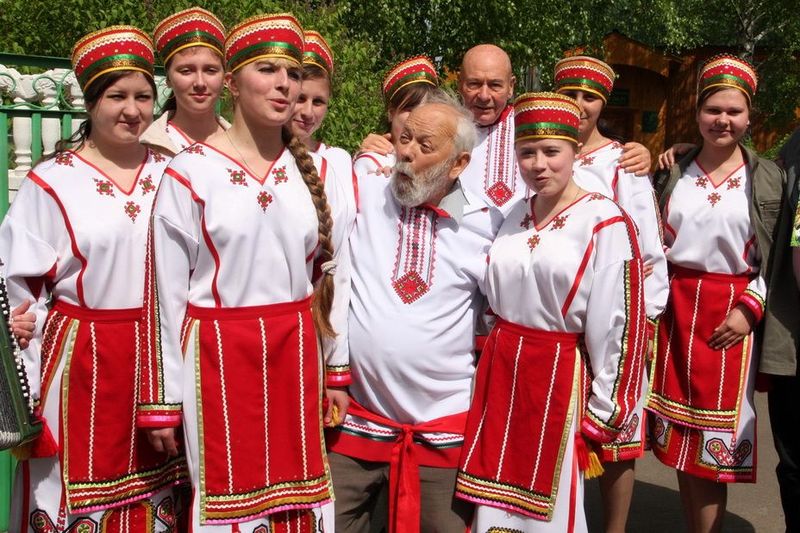 Erzyanki wore a shirt to the floor, and on top they put on a special national caftan, which is called “shushpan”. For solemn and festive occasions, it was sheathed with a red trim. The head was decorated with a headdress resembling a kokoshnik. 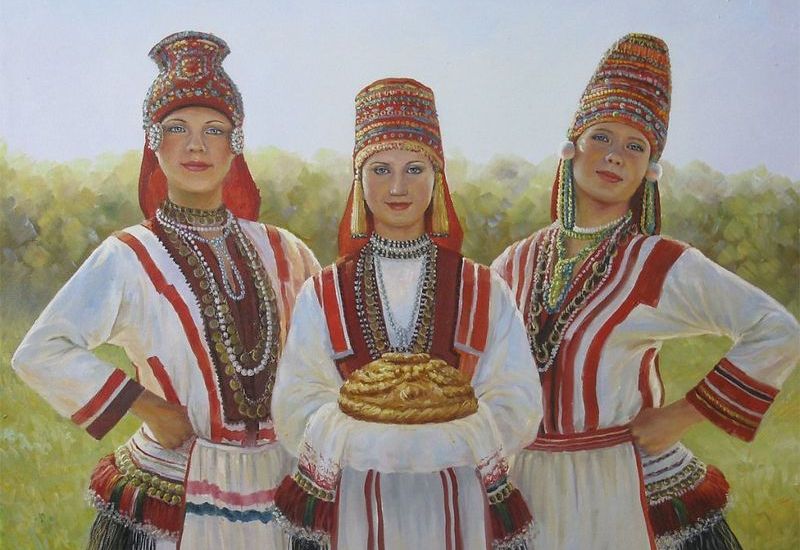 In recent decades, the traditional attire of the Mordovian people is experiencing a stormy return. It is worn not only for holidays, but also for important events, receptions, political meetings, etc.

Weaving on the territory of Mordva remains one of the oldest traditions that have survived to this day. This craft has been perfected over the centuries, so now Mordovian masters are highly valued all over the world. They became famous for two techniques – basket weaving and birch bark weaving.

Most household utensils were made from the vine: boxes, baskets, even large furniture. As a vine, any natural materials were used that are capable of bending well after processing and do not become too brittle. In Mordva, not only high-quality products are made, but also beautiful, elegant, striking with original decor. 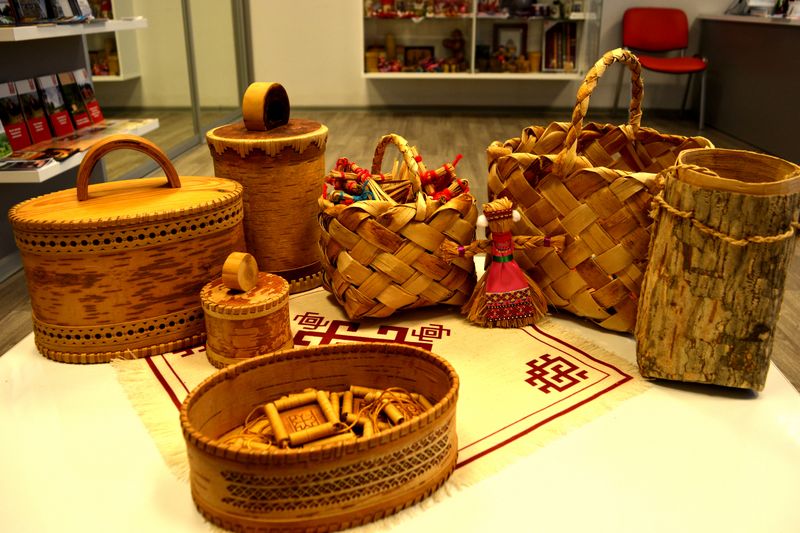 Birch bark weaving was developed because of the mixed forests that grew in these areas. The technique of removing from the tree, drying, pressing, separating salts and cutting has been passed down from generation to generation. Now in many museums of Mordovia you can see wicker household items. They were decorated with a special ornament in the central part, which distinguished them from the same products of other peoples. Many tourist centers sell birch bark souvenirs or crafts made from wicker vines.

Any tourist will be the first to appreciate the Mordovian traditions and customs associated with national cuisine. Despite the fact that in many ways the dishes are similar to Russian ones, they have their own features that can be tasted already at the first meeting. Basically, the diet consisted of agricultural products. Of interest is the bread that is still prepared in restaurants of national cuisine: this is sour bread baked in ovens on a cabbage leaf. It has a special flavor that children especially love.

They prepared many different porridges, making them the consistency of modern porridge-slurry, while seasoning with hemp oil. Therefore, the dishes were not only tasty, but also healthy. A special place was occupied by wheat pancakes, they were baked very thick to wrap different fillings.

But the most important role was given to cottage cheese. We can say that cottage cheese is a kind of white bread in Mordovia, because it is combined with various products and added to most dishes. Of the drinks, yogurt and kvass were very popular, which still have not lost their relevance. 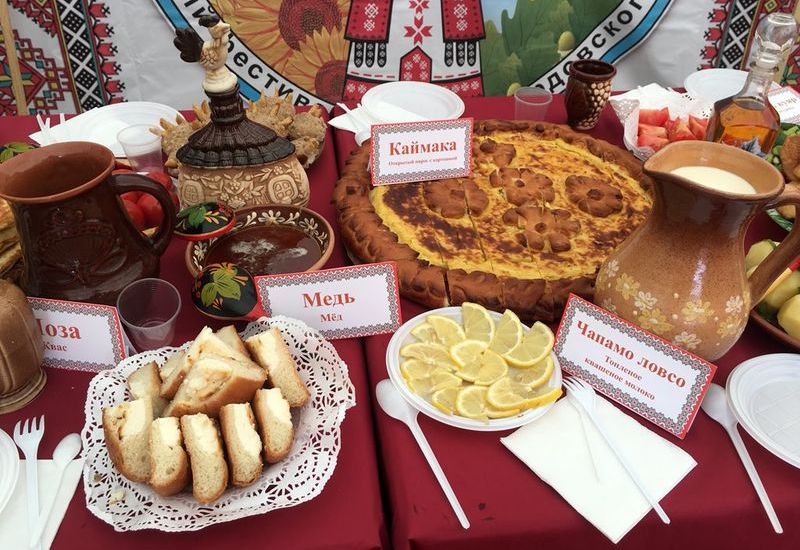 Representatives of this people are very fond of food. And now it is believed that a delicious meal for the holiday will please any Mordvinian more than other surprises and pleasant surprises.

Previously, the Mordovians lived on the banks of rivers and along the edges of forests. There were no streets in these villages, houses were built randomly as free land was seized. Usually relatives settled next to their relatives, so small quarters were obtained, consisting of representatives of the same clan. They were combined into large courtyards, inside which houses were located, and the perimeter was surrounded by a wicker fence or a fence.

The houses had a vestibule and one large room where all family members lived and slept. Families were very large, usually there were up to 3-4 dozen people. Representatives of different generations got along well with each other, each of them performed its own functions: the elderly looked after the children, and the middle-aged representatives worked in the garden, in the gardens, and were engaged in fishing. 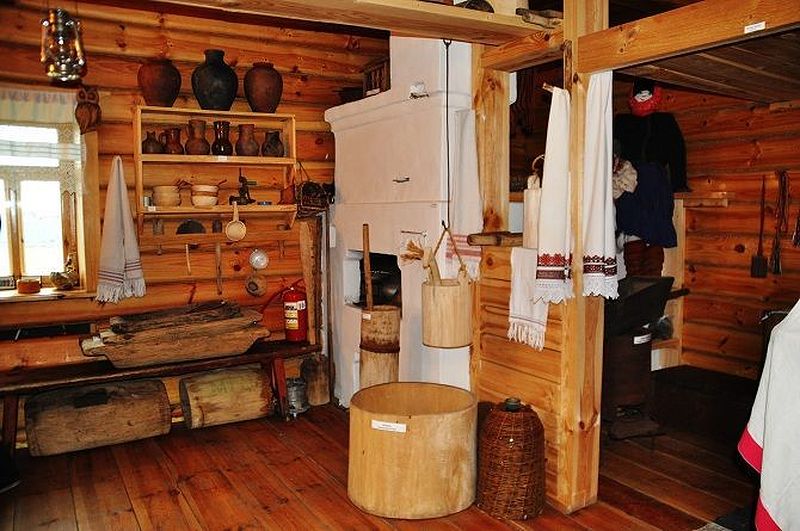 Everyone was housed in several houses, and a little further away were outbuildings where they kept animals and birds. The household was not divided for each family, but was common to the whole clan.

The houses were different from the Russian huts. In them, the only small window was made so that it looked not into the courtyard, but into the street. A birdhouse was always nailed under the attic, and if starlings settled in it, it was believed that there would certainly be happiness in the house.

Historians believe that Mordovians had a matriarchy for a long time, and this affected Mordovian traditions and customs. Women had a huge influence on husbands even when the matriarchal way of life was a thing of the past.

Children, women and men sat at the dinner table at different times. But this is not due to discrimination, but to the fact that a large family could not simultaneously accommodate together.

Education was not left to chance. They talked a lot with children here, paid great attention to issues of respect for elders, instilling love for work, and spiritual development.

The peoples of Mordovia have always been very hardworking, and the result of this was their material well-being. Farming, beekeeping, hunting for fur-bearing animals, breeding domestic animals – all this was approached very seriously and achieved impressive results. The culture of agriculture here was a level higher than in other regions of Russia. For this, neighboring peoples often disliked these tireless “bees”, accused them of attracting unclean forces to their side, conjuring, etc.

In fact, the ability to work rationally can be considered a folk tradition of Mordovia, which is passed down from generation to generation.

Kindness and generosity are considered the main features of these people. It was considered the duty of the owner to treat and feed the guest excellently, not only if they knew each other, but also when a stranger wandered into the house. Everyone felt welcome and long-awaited in the Mordovian villages. Russians from neighboring regions knew this feature of the Mordovians, so they were happy to come to their territory for the holidays. 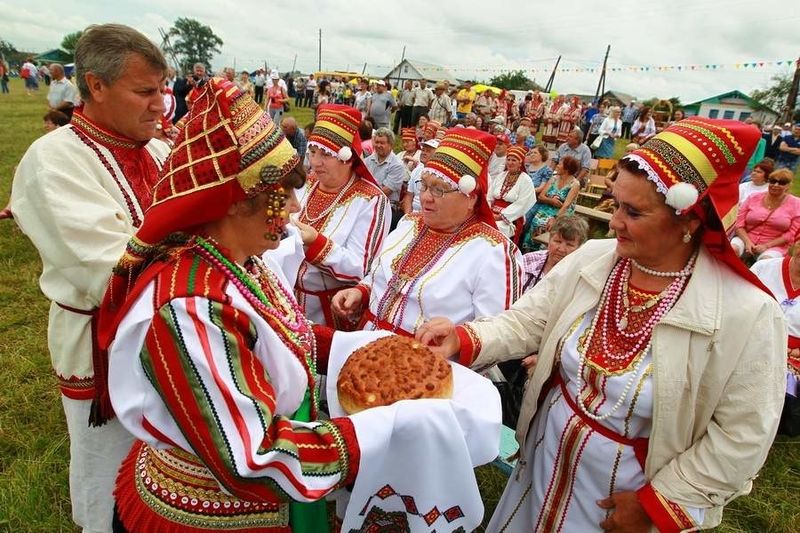 Also, any Mordvin loves to sing songs. Chants can be heard here in any conditions: at least for the holidays, at least in a difficult moment. Therefore, a tourist who gets into the house of local residents needs to be prepared for the fact that most of the feast will be devoted to songs.

The Mordovian region is known for felt boots made from sheep wool. From time immemorial, such skill has been passed down through the male line, as the process was very time consuming. In previous centuries, this trade was carried out seasonally – in autumn and winter, when agricultural work was on pause. But then all the tools changed, and felting is no longer tied to a particular season. 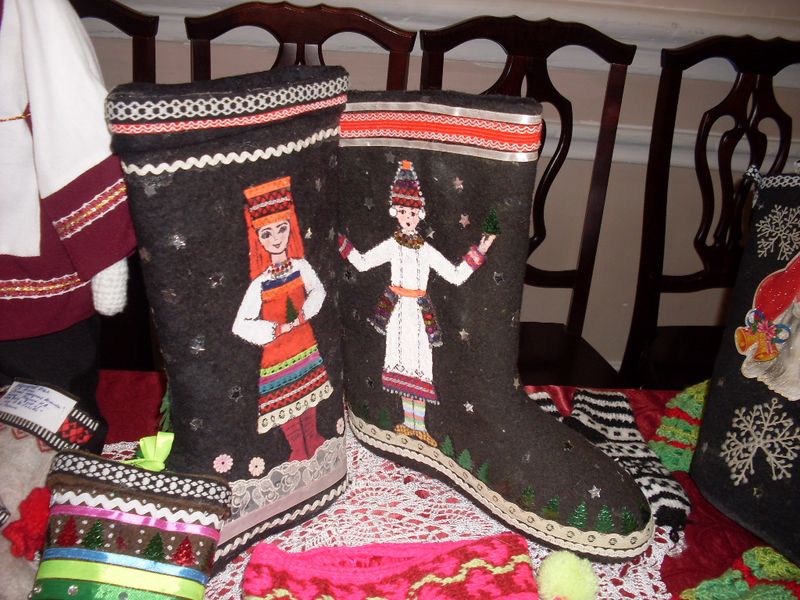 Now there are three felting centers in Mordovia: the village of Zhabino, Staroe Ardatovo and Urusovo. All these villages are adjacent to each other, and hereditary fullers work in them. In Urusovo there is a museum of felt boots of Mordovia. They are considered one of the national brands of the republic, as they are still made using traditional technologies.

Mordovian wedding traditions are one of the most distinctive phenomena of this people. Wedding traditions here are complex and numerous. Rather, they can be described as a folk musical drama in which the bitterness of farewell to her beloved daughter and her departure to a strange house are intertwined with the happiness of the groom and his relatives.

The choice of the couple was the business of the groom’s parents. The main factors that were paid attention to were the health of the girl, the wealth of her family and the diligence of the future bride. First of all, there was marriage. First, the groom’s father made donations to the gods, and then equipped the wedding train, if the second parents gave the go-ahead. There were many participants in this train, everyone performed their role. 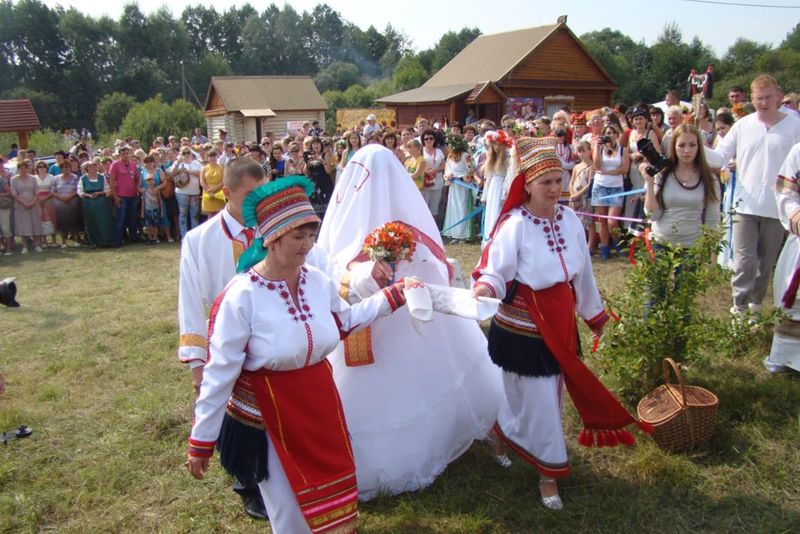 After the matchmaking, preparations for the wedding began. The preparation was serious, since the festival itself consisted of many stages:

The last was the day of the mummers, after which the holiday was considered completed.

The traditions and customs of the Mordovian people associated with children and large families are very interesting. Caring for offspring began from the moment the young people got married. From the first months of pregnancy, everyone tried to determine the sex of the unborn baby. If age spots appeared on the face of a pregnant woman, then a boy should be expected. The abdomen is slightly shifted to the left – to the girl, to the right – to the boy.

The two goddesses were considered responsible for pregnancy and childbearing. Viryava helped to get pregnant, so young families carried sacrifices to her. If the couple did not have children, this was considered the machinations of the second goddess – Vedava, who stole newborns and even unborn ones. Then gifts and prayers rushed to her. 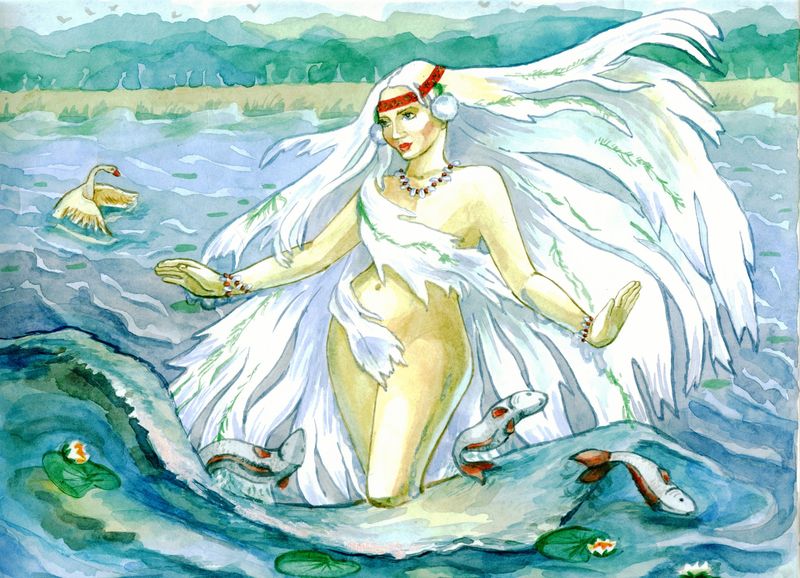 And if these traditions are already a thing of the past, then the custom of heating a bath for a young mother with a baby is still preserved. Previously, they put a magical meaning into it, but now only hygiene considerations remain. The first ablution with the mother is much more comfortable for the newborn.

Many superstitions and fears were associated with this moment. Signs such as a cracked mirror, the cry of an owl, an invasion of ants or mice spoke of the possible imminent death of someone from the family.

If someone died in the house, they put bread and salt on the table, and put a glass of water and a towel on the windowsill. Mordovians believed that the soul should wash and rest before leaving. The closest relatives were not supposed to participate in the funeral procession, so as not to go to the next world with the deceased. All distant relatives and fellow villagers came to say goodbye, who brought food and money.

The funeral was carried out only on the third day, while the body was laid in a shallow pit on the bedding. This custom gradually moved to the usual instillation, as with Christians. But in winter, they practiced “heavenly burial” for a long time: the coffin was hung on high branches, and in the spring they were reburied in the ground. Interestingly, windows were made in the side walls of the coffin so that the deceased could observe what his relatives were doing.