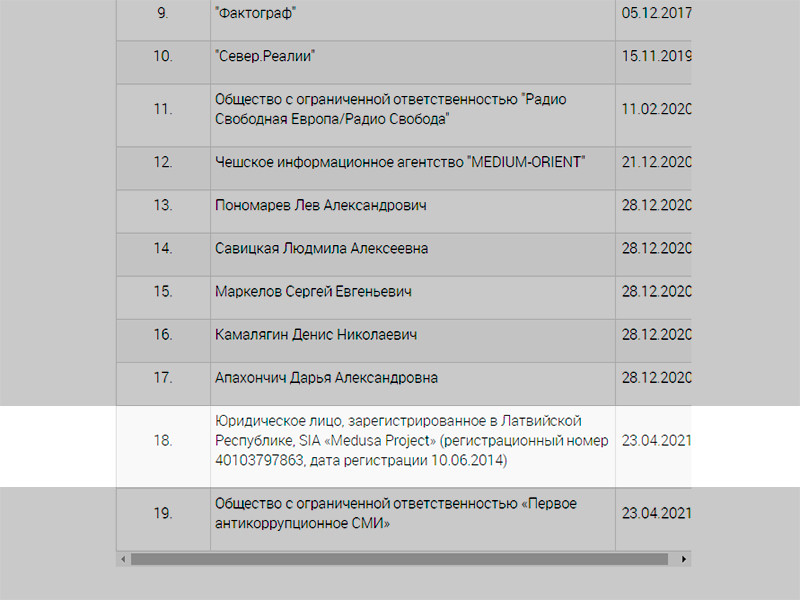 Ministry of Justice of Russia

A legal entity registered in a foreign state that distributes printed, audio, audiovisual and other messages and materials intended for an unlimited number of persons can be recognized as a foreign mass media performing the functions of a foreign agent if it receives foreign funding, the department notes.

“On the basis of documents received from the state authorities of the Russian Federation, confirming compliance with the characteristics of a foreign mass media performing the functions of a foreign agent <...> a legal entity registered in the Republic of Latvia, SIA Medusa Project * and Limited Liability Company “First Anti-Corruption Media” * are included in the register, “the Ministry of Justice said in a response.

The agency did not answer the question of which sources of foreign funding were the reason for the recognition of Meduza * as a “foreign agent.”

At the same time, the publication did not receive an official notification from the Ministry of Justice about Meduza * being included in the list of “foreign agents”, Anastasia Burakova, coordinator of the “Human Rights Postcard” told Open Media. She stressed that according to the law, the department had to send it within three working days – this period expired on April 28.

Lawyers for “Human Rights Postcards” are preparing a lawsuit challenging the decision of the Ministry of Justice, Burakova said. According to her, lawyers will only be able to get acquainted with the notification from the department, which should indicate the reasons for including Meduza * in the list, only in court when familiarizing themselves with the case materials.

As a reminder, on April 23, the Ministry of Justice included Meduza * in the register of “foreign agents”. Now the publication must notify readers of its status on every page, including posts in social networks. Meduza’s editor-in-chief, * Ivan Kolpakov, suggested that this could lead the publication to lose “a significant portion of its advertisers” in the near future, which means “the publication’s death.”

The decision of the Ministry of Justice poses threats to the journalists of the publication. “Authors who receive money from us can also be recognized as foreign agents,” warns Ivan Kolpakov. “If this happens (and there are already examples), they (like Meduza *) will have to report to the Ministry of Justice on all their income and expenses. Errors in reporting are threatened with fines, moreover – criminal prosecution and imprisonment. Organizing pressure on our reporters is now easier than ever. “

Finally, the stigma of “foreign agent” will scare away experts and a number of sources from Meduza *, the editorial office believes.

Kolpakov emphasized that the status of a foreign agent deprives the editorial office of “the opportunity to fully engage in journalism” and “destroys the business.” “The Ministry of Justice is implementing the political decision made by the Russian leadership, the goal of which is to kill Meduza *,” he said. According to Kolpakov, the editorial office “for the first time does not have a clear plan of action,” and Meduza * does not know what to do next. “

“Of course, we will continue to look for a way out. Of course, everyone wants a miracle. We will try, but we cannot promise,” concluded Ivan Kolpakov.

On Wednesday, the Kremlin commented on the situation with Meduza *. They don’t see drama or any problem that the publication might disappear. “We have deep respect for every media outlet,” said the press secretary of the Russian President Dmitry Peskov, noting that the Kremlin “values ​​the professionalism of journalists in every media outlet.” “But the modern information market is built in such a way that the disappearance of any media won’t feel too much. Let’s be honest. ” Peskov’s words are quoted by TASS.

According to him, the Kremlin understands that Meduza * is a private publication, but “after all, this is not a Russian media outlet.” So Peskov answered the questions whether the presidential administration associates the decision with regard to the publication with the “unfriendly actions” of Latvia, where the editorial office of Meduza * is located, and whether they understand that this is a private company not connected with any state.

The presidential press secretary noted that there are many Russian-language mass media available on the territory of the country, which, however, are not Russian. He recalled that there are also a number of media outlets that work for the Russian audience, but “have nothing to do with the Russian Federation.”