In fact, a real war is going on in Russia: in the permafrost in Siberia and Yamal, scientists have discovered more than 20 large craters from methane explosions that escaped from the permafrost captivity.

THE “MOUTHS OF HELL” COME FROM AN ICE AGE

Employees of the Center for Hydrocarbon Production at the Skolkovo Institute of Science and Technology (Skoltech) have proven that this is due to global warming. The permafrost layer is melting, thinning, and can no longer keep the methane underground so effectively. And an increase in the level of methane in the atmosphere can accelerate the process of global warming at times and cause the destruction of residential buildings and infrastructure.

Professor Julian Merton of the University of Sussex says the world has already faced methane explosions that scientists in Siberia are now observing. The last time the planet experienced the formation of “mouths of hell” (hellsmouth) millions of years ago, on the eve of the ice age. He published an article about it with the title “The Unfrozen Killer” in Paleoworld magazine. In the world, according to the scientist, a huge amount of methane, which was trapped in the permafrost and stored at the depth of the sea, is “ready for melting”. Once unfrozen, it will raise temperatures and heat the world to levels “deadly to most life on land and in the ocean.” This could lead to apocalyptic consequences for the planet. The Earth will turn into a second Venus with the same hellish climate.

WE SIT IN THE WAREHOUSE OF EXPLOSIVES

Russia, due to its unique geographic location, can suffer more from methane explosions in the northern regions than any other state. In our country, the permafrost zone accounts for about 11 million square kilometers and almost 2.4 million people live there. Large cities – Vorkuta, Chita, Ulan-Ude, Salekhard, Magadan, Petropavlovsk-Kamchatsky and Yakutsk – were once built on frozen soils that were considered stable. Now the high-rise buildings in these places are covered with a network of cracks. People will have to be relocated after some time. Where to? 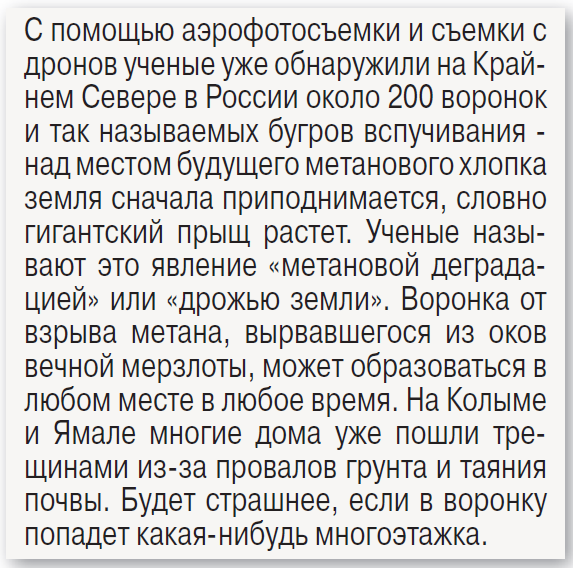 In addition, production facilities and ports are located in the Far North. And all this, together with residential buildings, can simply explode. When methane is released from the ground, pieces of earth and ice are scattered three hundred meters around. Gas emissions are often accompanied by spontaneous combustion of natural fuel, which is quite capable of damaging and setting fire to a nearby gas pipeline. Skoltech scientists called it a miracle that no one and nothing has ever suffered from such explosions. An explosion can occur at any time and in any place: methane deposits, which are abundant in our northern regions, are not explored everywhere.

The group of scientists from the Skolkovo Institute of Science and Technology and the Pacific Oceanological Institute of the Russian Academy of Sciences now considers Yamal to be the most explosive place in Russia due to methane. The first crater with a diameter of 20 meters and 50 meters deep was found here back in 2014. First, they put forward a space version of its origin – they decided that it was a crater from a falling meteorite. But when another two dozen craters were discovered and traces of methane were found in each crater, the approach to the problem changed.

The most unpleasant thing is that in terms of its effect on the climate, methane (CH4) is much more dangerous than carbon dioxide (CO2). Methane retains heat in the atmosphere 23 times more efficiently than carbon dioxide. This means that the Earth’s climate, which is already peddling, can begin to change many times faster. And no one is ready for this.

COWS WERE IN PUMPERS BECAUSE OF METHANE

In New Zealand, Germany, Switzerland, Belarus and even North Korea, diapers were put on herds of cows as part of an experiment. In addition to the “aesthetic” function, cow diapers have a purely practical one. These diapers allow you to collect the methane that the cow secretes from her intestines.

New Zealanders have even trained their calves to go to the toilet. Because, getting into the ground in the pasture, nitrogen-rich cow urine leads to the formation of at least two harmful substances – nitrates and nitrous oxide. And nitrous oxide is also a greenhouse gas, the excess of which leads to global warming. As a tasty treat, the cows were taught to “pour out” all their waste in one place, where it is easier to collect them.

And farmers in England are going to be forced to use “green energy sources” for lighting and heating homes, transferring to their additional accounts 159 pounds. The UK government intends to encourage farmers to convert the same methane from cows or biogas from the outhouse into electricity and heating fuel.

Maybe it’s time for Russia to think about how to pump out excess methane from under the permafrost before the explosion and put it into circulation for the good of the cause?