“Father died. In the morning. Suddenly. The big man is gone. If you can, pray to God, please, ”wrote the daughter of Yuri Vlasov on Facebook.

The great athlete left us at the 86th year of life. Mir Novostey recalls the Russian giant.

PEOPLE THOUGHT HE WAS DIED

Yuri Vlasov did not have a coronavirus. And he had no critical problems, although he underwent heart surgery. As his daughter Irina says, even on Saturday morning, his father was cheerful and cheerful, he managed to have breakfast with pleasure. But suddenly he slid off his chair, fell … The medical examination will still issue a conclusion, but they suspect that a blood clot has come off.

In general, Vlasov was “buried” back in 1996, when he was already a politician and entered the presidential race, challenging Boris Yeltsin. Received only 0.2% of the vote. As Vlasov himself explained this, he was blocked in the press, he was not given a tribune, and two weeks before the vote in Russia, they even launched a special issue with an obituary that the great weightlifter had died.

But he was alive. And he lived as a recluse in the suburbs until recently. Now many have expressed their condolences. Among them is the former Governor of California, Hollywood star Arnold Schwarzenegger, who tweeted: “Yuri Vlasov taught us all that“ impossible ”is just a word. He was the first person to lift 200 kg and inspired me when I met him as a young athlete in 1961. Because of such people, I refuse to say that I achieved everything myself. “

Vlasov and Schwarzenegger first met in 1961, when the World Weightlifting Championship was held in Vienna in September. There, Yuri won “gold” in the heavy weight over 90 kg, when he gained 525 kg in the sum of the bench press, snatch and clean and jerk, outstripping his closest competitor – American Richard Zirk (475) – by half a centner at once.

After one of the attempts, a coach approached the 26-year-old Soviet athlete, next to whom there was a thin boy.

And so the coach says: “This guy recently lost, wants to leave the sport. Tell him not to do it. ” Vlasov then told the boy how important it is to be strong in spirit, that you cannot give up and you have to work hard in training. It turned out that the 14-year-old was Schwarzenegger. 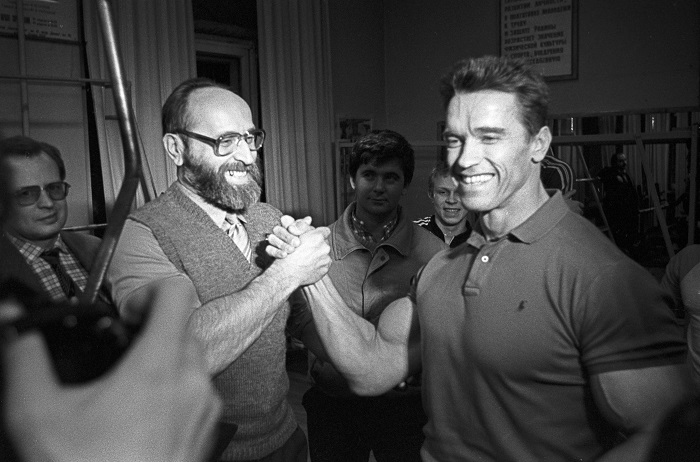 27 years later, Arnold, as a Hollywood star, flew to the Soviet Union to shoot the film “Red Heat”. In addition to cinema, he had two goals in Moscow – to buy an ermine coat for his wife and to see the idol Vlasov.

They met at the Sovetskaya Hotel. Arnold then said: “You changed my life, I owe you a lot.” And he presented his photo, signing it: “Yuri Vlasov, my idol, with best wishes.”

What is your first memory when you hear about this athlete? Most likely, this is the legendary circle of Yuri Vlasov at the opening of the 1964 Olympics in Tokyo. The weightlifter then carried the banner of the USSR, holding it with one outstretched hand at the end of the pole. Nobody else could do that.

Yuri was born in Makeevka, a satellite city of Donetsk, in 1935. But he studied first in Saratov, where he graduated with honors from the Suvorov Military School, and then in Moscow, graduating from the Air Force Engineering Academy. Zhukovsky and received the rank of senior lieutenant.

At night Vlasov read literature and wrote books, and during the day he worked in the gym. He was a fan of the legendary Paul Anderson, who showed 200 kg in the clean and jerk and 185.5 kg in the bench. No one in the USSR could get closer to the achievement of an American heavyweight closer than 20 kg until Vlasov entered the platform, breaking the idol’s record at 24 years old.

He easily won the Rome Olympics in 1960 and set a new world record with an incredible 537.5 kg in triathlon.

Vlasov was the same symbol of the USSR as Yuri Gagarin. Because weightlifting in the 60s was insanely popular in the world. No one doubted that Yuri would win at the 1964 Olympics in Tokyo. Vlasov had to push 212 kg, then his teammate Leonid Zhabotinsky would have to put 222.5 kg.

Zhabotinsky approached Yuri and formally surrendered: “Let’s do one approach of 200 kg for offset – and finish!” Zhabotinsky confirmed his intentions by reducing the weight from 205 to 200 kg. Yuri pushed 210 kg in a relaxed way and prepared his neck for a new gold medal.

Zhabotinsky would have saved only 217.5 kg, but in the second approach he barely tore the barbell off the floor. Vlasov, realizing that nothing threatened him, went to a world record. Unsuccessful – that’s okay, “gold” is still in your pocket.

But it was Zhabotinsky’s sporting trick: “With all my looks, I showed that I was giving up the fight, and deliberately reduced my starting weight. Vlasov felt himself the master of the platform, rushed to conquer records and cut himself off. “

Leonid performed the final approach perfectly, taking 217.5 kg. Everyone was dumbfounded. Vlasov was left without attempts and could not make a return move. He took this “silver” of the Olympics as a personal tragedy and immediately left the sport. Although he later returned to break the record again and receive 850 rubles for it. Then he retired again.

“I was in dire need of money. Those prize money was enough for me for six months of my life, ”Vlasov will tell later.

One of the journalists recalled: “The beginning of the 80s. On the train, I took a book from my fellow traveler. The story of the battles for Konigsberg excited me so much that I decided: it was written by one of the famous front-line writers. I looked – Yuri Vlasov. Probably the namesake and namesake. Indeed, during the war he was a junior high school student.

But soon I also read with great pleasure “Overcome Myself”, “Clown’s Room”, “White Moment”, “Justice of Power”, “Cold” and other wonderful prose of the Olympic champion and the absolute ex-world record holder ”.

Vlasov wrote stories, essays and even history books. For months he disappeared in the archives and created the “Special Region of China. 1942-1945 “. Yuri dug very deeply into the history of the Asian state, studied all the nuances of the party’s work and thoroughly memorized the life of Mao Zedong. The Soviet authorities became interested in the work, and the General Secretary of the Central Committee of the CPSU Yuri Andropov summoned the author for a conversation. The men locked themselves in the office for an hour and a half: the politician tried to knock out of Vlasov whether he had succumbed to outside influence when writing. Both Yuri came out of the door with smiles, and Andropov grabbed the athlete by the beard: “I wish I had such ministers … But it will have to be shaved off.”

In the 90s, Vlasov really went into politics. The authority of the Olympic champion helped him become a deputy, first in the USSR, and then in Russia. Yuri regularly criticized the authorities: “Even under socialism, even under capitalism, sycophants live well. You do not have a ridge, you are ready to crawl and lick – you will be the right person in any system. You have a core, principles – in any system they will erase and crush you, such people are not needed. I had a core. “

Later Vlasov suffered a terrible injury: the vertebrae were displaced, one of them broke off and touched the spinal cord. He underwent emergency surgery, opened his back 20 cm in each direction and literally sawed off his spine.

“The pain was hellish. When I woke up, I was struggling with torment. Everything around was in blood, but I did not whine or moan. The doctors changed the sheet, but it was again covered in blood. It turned out I was given the wrong dose of pain reliever. Nothing – after a year already trained.

In recent years, Vlasov lived in a cottage in the suburbs. After the death of his wife, he underwent heart surgery, and he was prohibited from any physical activity. “Even if I raise my hands five times, the blood can cling to my heart, and then everything will be bad,” Yuri Petrovich said in one of his last interviews.

He believed that his power is from nature: “Strength does not degenerate. Only the craving for training degenerates. I am still sure that people who use anabolic steroids cannot be compared with me … “