Manage to legalize the redevelopment of housing

In 2022, the rules for coordinating redevelopments have changed and become simpler. Apartment owners have received a number of concessions, they should be used – they must be in time before the end of the year.

For those who want to agree on the redevelopment after the repair, there is an opportunity to do it now without penalties – a moratorium has been introduced until December 31, 2022. It is necessary to collect the necessary documents and submit to the Moscow Housing Inspectorate, and this can be done online. Those who are just planning repairs have also expanded their opportunities: the period for permission to carry out redevelopment has been extended from 12 to 18 months.

In general, experts recommend approving the redevelopment before the start of repair work, this will help to avoid difficulties and problems.

The very idea of ​​redevelopment must be approached wisely. As Svetlana Gonenko, founder of the National Center for Redevelopment and Reconstruction, a member of the Federal Committee for Housing Policy and Property Management OPORA Rossii, explains, it is possible to register a redevelopment if nothing unacceptable has been done: load-bearing walls have not been demolished, the bathroom has not been transferred to living rooms …

“Now developers often rent out houses with open-plan apartments, they tell residents: “Set up the partitions yourself, as you wish.” And then it turns out that this is not such a “free planning”, because there are norms and restrictions,” says Svetlana Gonenko.

It is very important to consider the location of the so-called wet areas – these are bathrooms, kitchens. In new buildings, the principle “who is the first, he did it” applies. The fact is that if one of the neighbors makes and coordinates the interior partitions first, then you will have to adapt to it. As the expert explains, in fact, a lot of things can be “fixed” in the apartment, but this should not violate fire and sanitary standards. It will not be possible to legitimize the redevelopment if the kitchen with a gas stove was combined with a room, or if batteries or a water floor were brought to the balcony for heating. It is impossible to dismantle the fence to the floor on the balcony or loggia, it is forbidden to expand the bathroom at the expense of the room if there is an apartment under you. You can not attach kitchen ventilation to the bathroom. 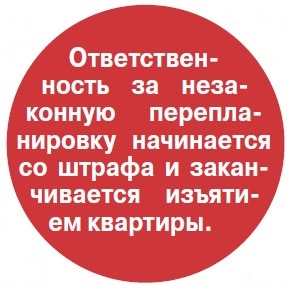 What and how is it possible? “There are always nuances. For example, if you want to expand the space of an apartment, then in houses of some designs you can make windows to the floor. If you want heat on the loggia – you can start electric heating. In addition, they allowed to make an exit from the only bathroom to the room – earlier there was a ban on this. Now designers have more opportunities to organize an additional bathroom in the apartment, but it can be done at the expense of corridors or pantries, but not at the expense of rooms or the kitchen, if this is not the first floor,” continues Svetlana Gonenko.

Now it is also not necessary to make the floor in the bathroom below the level of the apartment and the overflow threshold (this is how it was built earlier in case of flooding), the problem of the flood is solved by waterproofing the floor. It was also allowed to make a shower not in the form of a cabin, but with a drain in the floor and glass walls. By the way, this is an important concession for people with disabilities.

“A fine in the amount of 2-2.5 thousand rubles is now imposed for inconsistent redevelopment,” explains Svetlana Gonenko. – The second level of responsibility is to bring everything back to its original state. Finally, if a citizen ignores the requirements, one can go as far as selling an apartment at auction by a court decision, and there is such judicial practice.”

To legitimize the redevelopment, the expert recommends, it is necessary to prepare a project, and it is not done by designers or cadastral engineers, but by special organizations that have the appropriate permission. The project is submitted to the housing inspection or architecture authorities, which give an order to approve the redevelopment. After the work is completed, an act of the acceptance committee is drawn up, which comes to the place and compares everything that has been done in the apartment with the project. Finally, you need to order a technical plan from a cadastral engineer. All these documents are submitted to the MFC to make changes to the cadastre, the area of ​​the apartment after redevelopment is also specified in the documents, and an extract about the object is issued.

“It is best to go through the hassle with coordinating the redevelopment right away so as not to depreciate your property, not to cause problems for the heirs,” advises Svetlana Gonenko. – And experts in coordinating such work will tell you how to develop an action strategy at minimal cost. Do not forget that such a specialist must work officially, be sure to check the documents so as not to trust the scammers.