MakSim, who was in a coma for a long time, appeared at the school of her youngest daughter 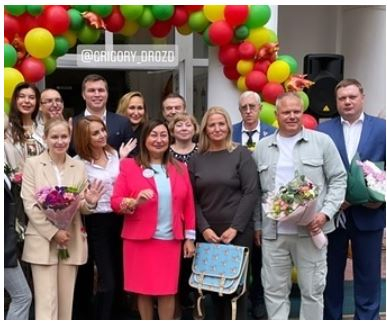 Singer MakSim (real name – Marina Abrosimova) appeared on the first school lineup with the youngest daughter Maria, according to the fan group of the artist. The girl went to a prestigious metropolitan institution, where the girl will be surrounded by the heirs of many Russian stars.

“Masha went to a city school, the council of which is the Honored Trainer of the USSR, Honored Art Worker of the Russian Federation, Master of Sports of international class Tatyana Anatolyevna Tarasova. It also includes the famous actress Yulia Peresild, director Alexei Uchitel, Russian professional boxer Drozd Grigory Anatolyevich, head of CSKA, candidate of pedagogical sciences, master of sports Gromov Artem Valerievich, Soviet hockey player, Honored Coach of Russia Mikhailov Boris Petrovich and many others, ”says in the message.

In the photographs, the 38-year-old singer stands in front of an educational institution with her teachers next to Yulia Peresild. Despite the transferred coma, MakSim looks happy in the pictures and smiles happily at the camera.

Abrosimova also has an eldest daughter, Alexandra. The 12-year-old girl appeared in the artist’s first marriage with sound engineer Alexei Lugovtsov. She gave birth to her youngest daughter already paired with businessman Anton Petrov, with whom they parted shortly after the birth of Mary.

Earlier, a rehabilitation doctor assessed the condition of the emaciated singer MakSim after being discharged from the hospital.

The artist was hospitalized on June 16, three days later she was connected to a ventilator. Back on June 11 in social networks, she reported that she felt bad. The artist underwent several tests for coronavirus, but all of them showed a negative result. Due to her deteriorating health, the pop star was put into an artificial coma.