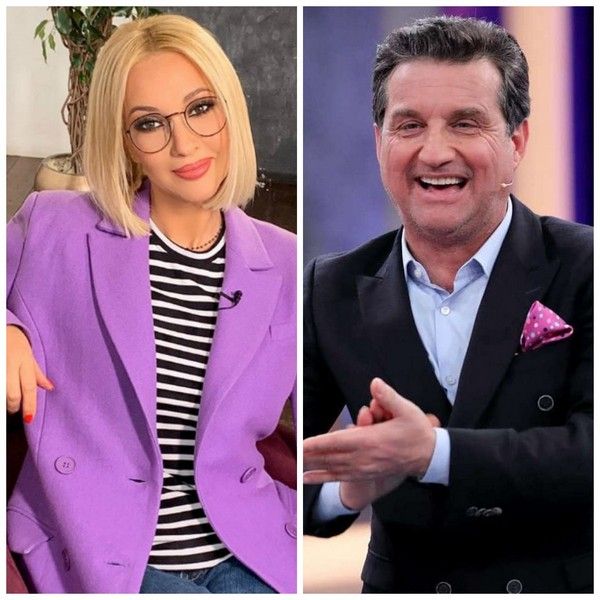 Today, Lera Kudryavtseva decided to recall its earlier experience on television and published archived video after the filming of the program "Muzoboz" in his microblog in Instagram. The video, according to the leader, for 22 years — photography dated 1998. The footage of the old video Lera appeared in the company of his co-presenter Otar Kushinashvili. In 1998, two journalists joined Ivan Demidov and became the lead has become a cult in those days, "Musical review" together.

"1998 #muzoboz the #archive @otar.kushanashvili" — succinctly signed his publication the star of television (the spelling and punctuation of the author here and further are given without changes. — Approx. red.). "This program has already worked on the last nerves, any decent person live there. Well, there's a decent one, and then briefly show you... It's me!", — joked Kushinashvili in a historic conversation with a co-host.

Note that colleagues Otar and Lera began in 1995, when Kudryavtseva became one of the leading music programs "The party zone" on channel TV-6, now known as MUZ-TV. It is noteworthy that the casting for the program, Lera came in a rather exotic way, with African braids and a pierced eyebrow. And this despite the fact that her competition were girls of model appearance. And yet, the producers chose them exactly Kudryavtsev dared to look unformatted. That's when it then became co-presenter Otar Kushanashvili and Gosha Kutsenko. By the way, photos from the set of "the Party zone" leading "the Stars aligned" shared repeatedly.

Recall, the career of the 49-year-old Lera Kudryavtseva started with the dancers in the show stars of the 90s:Eugene Aspen, Bogdan Titomir, Igor Saruhanov and Svetlana Vladimirskaya. But real climbing girls on stardom was thanks to her first husband, the drummer in the band "Tender may" Sergey Leuku. It was he who brought the young artist with the right people from the music and art crowd. In 1998, Kudryavtseva appeared in the "Muzoboz" Ivan Demidov (1998-1999, TV-6), then, in 2007, in the "loyalty Test" on the channel "MUZ-TV" and "Club of the former wives" on TNT.

Lera Kudryavtseva with African braids in 1994

As for Otar Kushinashvili, his career began when he was a young man published in the newspaper of his hometown "Kutaisi true" and corresponded with the legendary authors "Literary newspaper". From childhood ambitious, he dreamed of a career in journalism. "I was 14 years old and I am from Kutaisi write Lev Annensky: "Chingiz Aitmatov is a bad writer! You read at least Nodar Dumbadze. Our writers will be stronger!" And probably ofigev, Lev wrote to me in response: "could You write more about yourself." I remember kissing him a letter and crying" — said Kushinashvili in an interview.

It is worth noting that of the faculty of journalism of Tbilisi state University flock was expelled, and he decided to move to Moscow immediately after the service in the army. Initially in the capital, his life was not as we would like. The guy had to wash the floors at Paveletsky station and work as a night watchman. However, in 1993, he became a staff correspondent of the newspaper "New look", and from that moment his artistic career soared. When he first appeared on the program "Wordsmiths", well-known journalist Stanislav Rassadin wrote about it in his article: "this disgusting lad attacking decent people indecent questions, Otar Kushanashvili, I barely recognized the wonderful young man from Kutaisi, who wrote me naive, semi-literate, but full of fire letters. It is the age of Changeling. Sorry I had contact with him".

But after the cult of the program "Shark pen" success immediately come to cusanelli — he created the image of the controversial, sharp-tongued journalist, did not recognize the authority and up only hot topics. Under the patronage of the founder of the newspaper "New view" Eugene Dodolev and producer Ivan Demidov, he became the star of Russian journalism and in 1995 — editor-in-chief of the weekly "Muzoboz". Later, he became co-host of the heroine of reality show "House-2" Alena Vodonaevoy in an online project RealityGirl. And here has not done without scandals — Kushinashvili publicly announced that he sees no difference between unknown provincial girl and famous Alena Vodonaevoy.