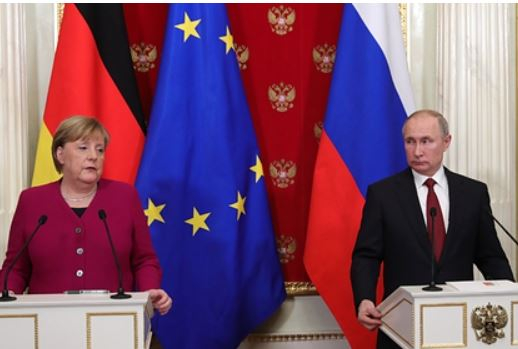 Russian President Vladimir Putin and German Chancellor Angela Merkel held a telephone conversation. It took place on the initiative of the German side, RIA Novosti reports with reference to the Kremlin press service.

The situation with “Nord Stream-2”

As part of the talks, Putin and Merkel discussed the construction of the Nord Stream 2 gas pipeline, which is nearing completion. The leaders of the countries expressed their satisfaction with the finalization process.

The President of Russia noted the consistent commitment of the German side to the implementation of this project, which is of an exclusively commercial nature and aimed at strengthening the energy security of Germany and the European Union.

The Kremlin also revealed other details about the talks between the two politicians. Merkel told her Russian colleague about the results of negotiations on Nord Stream 2 with US President Joe Biden.

US Undersecretary of State for Political Affairs Victoria Nuland in the next hours on July 21 promised to make public the details of the agreement reached with the German government. It is noted that the United States has decided not to risk relations with its key ally.

Therefore, the US administration decided that in such circumstances it is not worth the risk of undermining, a significant complication of our bilateral relations with our key ally.

Putin and Merkel discussed the possibility of extending the agreement between Gazprom and Naftogaz on the delivery of gas through Ukraine after 2024.

In addition, during the conversation, Putin drew particular attention to the discriminatory law “On the indigenous peoples of Ukraine” adopted by the Ukrainian Rada. According to the document, these include autochthonous ethnic communities that have formed on the territory of Ukraine, have a distinctive language, culture and do not have a state education outside the country. Russians are not included in this definition, for which the law has received repeated criticism from Moscow.

When exchanging views on the internal Ukrainian crisis, including in the context of the outcome of Angela Merkel’s meeting with Ukrainian President Volodymyr Zelensky in Berlin on July 12, the Russian President drew particular attention to the openly discriminatory law “On the Indigenous Peoples of Ukraine” adopted by the Verkhovna Rada. The need for the strict implementation of the 2015 Minsk Package of Measures by the Kiev authorities was also emphasized.

The leaders of the countries also discussed natural disasters in both countries. Thus, Merkel expressed the hope that forest fires in Yakutia will be extinguished in the near future. Due to wildfires, more than 100 settlements in the Russian region were covered with smoke. Putin, in turn, expressed condolences over the unprecedented floods in western Germany, which killed 160 people.

Earlier, German Foreign Minister Heiko Maas revealed the goals of the state in relations with Russia. He stressed that Berlin seeks to develop pragmatic interaction with Russia in possible areas for this.