Even after hundreds of years, the Khazars, Pechenegs and Polovtsians do not allow the Russian people to live in peace.

Electrician Ivan Moskovkin from Uryupinsk dreamed of his own house for many years, and when he finally saved up money, he bought a plot in the nearest farm Popov, began to dig a pit and came across human bones and some shards. I had to say goodbye to the dream of a home for a while.

THE KEEPER OF ANCIENT BONES

Representatives of the regional authorities from Volgograd, having learned about the find, forbade Moskovkin to build a house and a garage, and a few months later the electrician received a letter in which the regional committee of the State Protection of Cultural Heritage Sites urged him to pay almost 248 thousand rubles for ... future archaeological excavations. It is not difficult to guess how exactly Ivan responded to this tempting offer, clearly marking the road where regional leaders of, excuse me, culture should go.

For three years now, the family of a poor electrician from Uryupinsk has been unable to build a house or sell a plot, and still has to take care of the safety of the Khazar relics remaining in the land. Now Ivan and his wife Tatyana are huddled in the territory of the kitchen, built in another corner of the same land plot. If Ivan Moskovkin had known that things would turn out like this, he would probably have quietly thrown these ancient bones and shards into the nearest ravine at night and lived and lived in his house.

But Ivan is a conscientious and law-abiding person. And therefore, when he found some human bones, he reasoned like this: what if these are traces of some kind of crime? And called the police. The law enforcement officers immediately understood: the bones did not belong to their competence, and if there was a crime, it was so long ago that you could not find the ends. But the archaeologists called by the police immediately determined that the find belongs to the end of the VIII - the beginning of the X century. 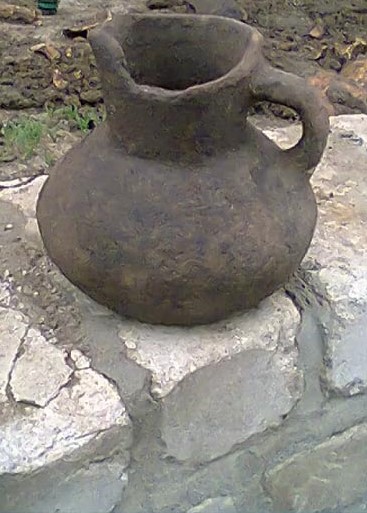 In the courtyard where Moskovkin cleared a place for the construction of a two-story house, with the help of a metal detector, which reacted by beeping to ancient knives and swords, three burials were found at once. A historian from the Uryupinsky museum of local lore, together with the owner of the site, took out a clay pot and a jug from there, which were transferred to the regional museum of local lore, and decided to wait for specialists from Volgograd.

For some reason they were in no hurry to go. Later it turned out that the specialists who have the right to excavate such burials in the Volgograd region can be counted on one hand. Plus, before starting excavations, you still need to follow certain procedures and get a bunch of permits.

Only a month later, the experts arrived at the Moskovkin site and carried out "work there to establish the historical and cultural value of the burials." The Regional Committee of the State Protection of Cultural Heritage Sites by Order No. 123 included this archaeological site in the list of identified sites under the name "Popov Burial Ground".

At the same time, officials of the Regional Cultural Heritage continued to insist that, according to federal law, the owner of the land should pay for archaeological research, and on this basis, Moskovkin billed almost a quarter of a million rubles, strictly warning about responsibility for unauthorized construction of a house, while cultural heritage ”will not remove bones and pots.

And where does the electrician's family get that kind of money?

- And why should I even pay to extract these bones? I didn't bury them there! - Ivan Moskovkin is indignant.

THE ARCHAEOLOGIST WILL DELIVER FROM THE ANCIENT "CURSE"

Bureaucratic red tape could go on indefinitely, but the Regional Cultural Heritage realized that the electrician's family had no money to pay for the excavations. In another letter, officials themselves offered to "pay for the work from extra-budgetary funds when they appear." When will they appear? Unknown.

All this time, Moskovkin's car was rusting in the open air without a garage, while Ivan himself and his wife Tatyana continued to live in the kitchen at the ancient cemetery. But the solution was found!

Chairman of the Committee for State Protection of Cultural Heritage Sites Alexander Bazhenov turned to Volgograd State University, to archaeologists: "Who cares?" He said that he agreed in his personal time, along with volunteers from among the students, to come to the site and excavate the same burial ground. The obligatory document in such cases - an open sheet from the Ministry of Culture for carrying out archaeological rescue work - has already been received. Now we are preparing for the expedition. Let's hope, as they say, that our hero electrician will build a house ...

Photo by the author.