This, according to analysts’ forecasts, will raise interest rates on deposits and restrain the rise in prices, but will lead to an increase in the cost of mortgage loans.

RULES DIRECTED BY THE BANK OF RUSSIA

“MN” has written more than once, but it will still be useful to remind what the key rate is. Quite simply, this is the minimum percentage at which the Central Bank gives money to commercial banks. The key rate changes up or down – the value of money also changes. For example, if a bank takes money from the Central Bank at 4.25%, then it gives it to its clients at 5%, and if at 5.3-5.5%, then, accordingly, the final price for the consumer increases to 6- 6.5%.

The key rate of the Bank of Russia affects all banking products – mortgage, consumer and business, and also affects deposits, tax penalties, compensation for delayed wages and late payments for utility bills. By and large, the interest rate policy is always applied by the Central Bank to eliminate various imbalances in the economy. This time – to moderate inflation: the rate of growth of prices in May amounted to 6% in annual terms, and the Central Bank blames the general recovery in demand for this. Actually, this very recovery is a positive factor for the economy (the more the population buys, the more actively enterprises increase their output of goods and increase production), but, according to the country’s main bank, now the demand is too active, which “outstrips the possibilities of increasing output” in individual sectors. Let’s not argue. As they say, the giraffe is big, he knows better.

We will also not indulge in arguments about how the upper and lower classes consider inflation and why it differs in both countries in the same way as an ant from an elephant. In this case, the Central Bank came to the conclusion that the official inflation rate of 6% in May is very high. Just look, by the end of the year Russia will not see 4% per annum, but I would like to contemplate.

That is why the regulator is trying to reduce the availability of money by raising the rate. Now loans are more expensive by 0.5%, fewer people and entrepreneurs will want to borrow money from the bank, which means there will be less money on hand, demand will decrease, prices will not rise, inflation figures will capitulate. This is how the Bank of Russia thinks.

There are both pleasant and not very pleasant moments in this whole story.

The plus is seen in the strengthening of the ruble. He recently gained weight: for the dollar they give 72 rubles, for the euro – 87.8 rubles. Considering that the share of imports in consumer goods and food reaches 65%, the strengthened national currency somehow keeps prices down. The logic of the Central Bank is as follows: if after the March and April increases in the key rate – by only 0.75% – the ruble has become stronger, the tactic has been chosen correctly – it is necessary to further raise it.

More from the positive. Interest on ruble deposits, although insignificantly, should rise.

– During the pandemic, the preferences of depositors have changed. Many took personal money from banks and converted it into foreign currency. The government’s task is to return part of the population’s savings to financial institutions by increasing interest on deposits, says financial literacy expert Galina Mayorova.

But a strong increase in these same percentages is not yet noticeable. In the first ten days of June, the maximum rate in the largest banks on ruble deposits and savings accounts increased by about 0.6% and averaged 5.1%. And this, as we have already said, after one after another increase in the key rate by a total of 0.75%. After June 11, analysts predict, interest rates should rise further. It is assumed that the maximum rate on deposits will reach 5.5%. When exactly this will happen and whether it will happen depends on the need of a particular bank for money: if there are enough funds for operating activities, it makes no sense for it to attract new deposits with higher rates. 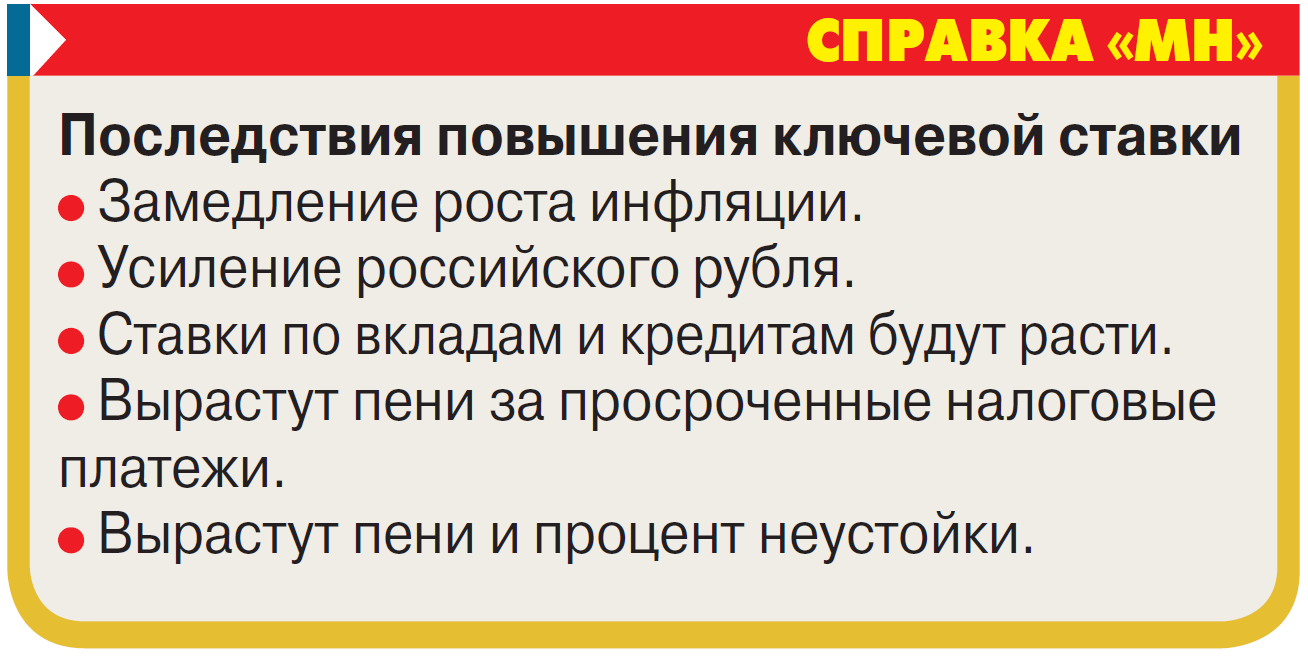 Now about the not entirely joyful prospects.

The rate is likely to affect the demand and availability of loans for businesses.

– If economic growth declines, central banks, in order to spur entrepreneurial activity, usually conduct a super-soft monetary policy – the discount rate is kept at a minimum level, thanks to this, loans are inexpensive. Under the current conditions, negative consequences are possible in the form of a rise in the cost of credit for the Russian economy, which is still not strong from the crisis. In the near future, banks will promptly compensate for the losses received last year by increasing interest rates on loans and, of course, by more than 0.5%, – said Vladimir Tregubov, Associate Professor of the Department of National Economics of the EMIT RANEPA, Candidate of Economic Sciences.

According to a number of experts, rates on housing loans will increase. In any case, the rates of the Central Bank, which had jumped up earlier, had an unambiguous effect on them. However, after the June decision of the Central Bank, mortgage rates are unlikely to go into a frantic growth, because they will be pressured by the still operating preferential mortgage, regional preferential mortgage lending programs and the struggle of the banks themselves for the client. However, some analysts believe that average mortgage rates could rise to 8.5%.