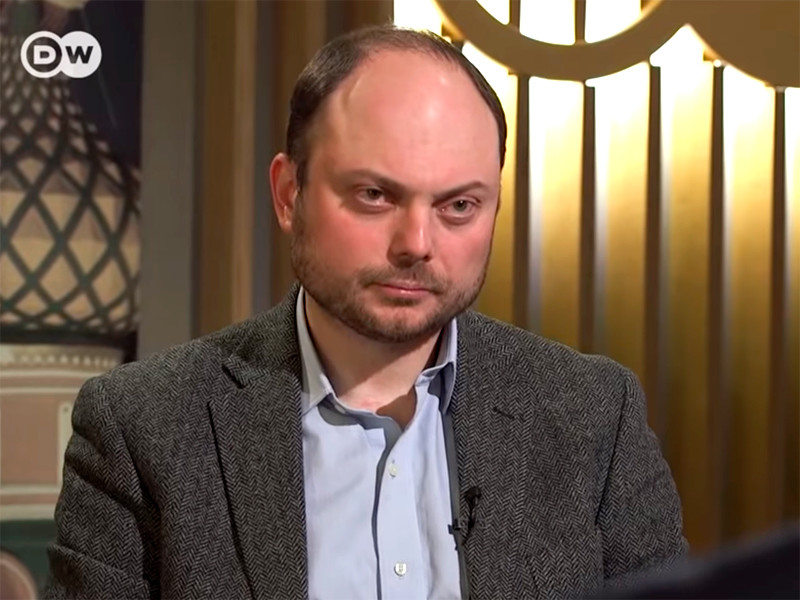 Politician Vladimir Kara-Murza has filed a complaint with the Investigative Committee demanding a criminal investigation into attempted murder following the Bellingcat investigation into his 2015 and 2017 poisonings. The lawyer Vadim Prokhorov told “MBH Media” about it.

“First of all, in our statement, we indicated two attempts on the life of Vladimir Kara-Murza. In both cases, we have already submitted a crime to the Investigative Committee, neither in either case have we received any orders to initiate or refuse. they recalled this and at the same time attached data from the investigation, which directly indicated the names of those FSB officers who directly followed Vladimir on his trips, “he said.

According to Vadim Prokhorov, the new statement should force the Investigative Committee to give one or another answer. “It seems to me that they will give a refusal decision. And then we will appeal it up to the ECHR,” the lawyer said.

Opposition politician Vladimir Kara-Murza Jr. has already twice applied to the UK, but received no response. After Bellingcat’s investigation, he noted that “specific facts, specific dates, specific names of people identified by Bellingcat have emerged.”

Kara-Murza stressed that the evidence of the poisoning presented in the Bellingcat investigation is not indirect, but direct, since it was not ordinary FSB officers who were monitoring him, but experts in the field of toxic substances. “Chemists do not work with tramples. The presence in all trips of employees of the Research Institute-2 (Central Research Institute for Special Research of the FSB. – Approx. NEWSru.com) clearly indicates poisoning, “he added.

According to Vladimir Kara-Murza, the Russian state resembles the dystopia described in George Orwell’s novel 1984. “This is pure Orwell. The Service for the Protection of the Constitutional System is engaged in organizing political assassinations, and the Institute of Forensic Science of the FSB (the so-called NII-2), which is designed to identify chemical weapons, uses them to eliminate opponents of the current government,” the politician explained.

On February 11, The Insider and Bellingcat published a joint investigation alleging that the FSB officers “accompanying” Alexei Navalny on his travels could also have been involved in two poisonings of Vladimir Kara-Murza in 2015 and 2017. This conclusion was made taking into account the movements of the counterintelligence officers, which many times coincided in time and place with the trips of Kara-Murza.

The opposition politician was allegedly poisoned twice. In 2015, Kara-Murza suddenly became ill while meeting with colleagues. The doctors diagnosed him with acute renal failure due to intoxication. For a long time, the oppositionist was in a state of artificial coma, was connected to artificial life support devices, since the work of the main organs – lungs, heart, kidneys, liver and intestines – was disrupted.

Moreover, after the poisoning, events developed approximately according to the same scenario as in the case of Alexei Navalny. The head physician of the First City Hospital Aleksey Svet said that the patient of Kara-Murza was “not transportable” and therefore could not be transferred to Germany for treatment. He even managed to convince Kara-Murza’s father, Vladimir-Kara Murza Sr., that in the biological samples taken for analysis there was nothing like poison (in the first days, the journalist’s father himself asked not to put forward criminal versions). Meanwhile, in the media, through anonymous sources, theories began to be thrown in that Kara-Murza allegedly went too far with antidepressants.

Nevertheless, samples of blood, urine and hair of Kara-Murza were sent for toxicological analysis to a French laboratory. They found that the concentration of manganese in the blood of Kara-Murza was 100 times exceeded. Zinc, copper, mercury and magnesium were also well above normal, while iron was below normal.

But a Russian forensic expert could not confirm the poisoning.

Two years later, in February 2017, Kara-Murza was hospitalized in critical condition in a Moscow hospital with the same symptoms as the first time. Kara-Murza survived. As he later said, doctors claimed that his chances of survival were about 5%.

After the poisoning of Alexei Navalny, Kara-Murza said in an interview that the symptoms described by Navalny “coincide one to one with those symptoms” that he himself had with both poisonings.

Investigators from Bellingcat have established that employees of the FSB Institute of Forensic Science ended up in the same cities as Vladimir Kara-Murza, both before the first hospitalization and before the second. Moreover, the first joint trip of the poisoners with Kara-Murza coincided with the murder of Boris Nemtsov, who was shot on February 27, 2015. Boris Nemtsov and Kara-Murza were two key figures in lobbying for the “Magnitsky Act,” which put people close to Putin under sanctions.

After analyzing the information about the movements of the FSB officers, the authors of the investigation concluded that the special service accompanied Kara-Murza on trips to seven different cities. Moreover, two months before the first poisoning of Kara-Murza, a certain Roman Mezentsev joined the staff of the Institute of Criminalistics.

Bellingcat notes that Mezentsev is the most senior FSB officer who accompanied the politician on the trip. After receiving information about Mezentsev’s calls, the investigators found out that he had repeatedly talked on the phone with Colonels Makshakov, deputy chief of the Research Institute-2. His name first became widely known after the publication of an investigation into the poisoning of Alexei Navalny. Bellingcat points out that Mezentsev and Makshakov spoke on the phone, including several days before the poisoning of Alexei Navalny.

Bellingcat analyzed the trips of Vladimir Kara-Murza 12 months before his first poisoning in 2015 and compared them with the trips of prominent employees of the FSB Institute of Forensic Science and officers of the Second Directorate of the FSB (Directorate for the Protection of the Constitutional Order). It turned out that three months before Vladimir’s unexplained hospitalization, Kara-Murza was accompanied by alleged FSB officers at least four times on trips across Russia. These were trips to Tomsk, St. Petersburg, Kaliningrad and Kazan. Moreover, the trip to Kazan took place from 22 to 24 May 2015, and Kara-Murza and his entourage returned to Moscow less than 48 hours before the onset of symptoms of poisoning.

After the second alleged poisoning, Kara-Murza’s wife took her husband’s blood samples to the United States, where she met with FBI officers, who promised to transfer them to a toxicology laboratory and later provide the results of the examination.

The results were never received, despite repeated requests and inquiries made by the politician and his relatives. After Kara-Murza filed a lawsuit, the FBI still shared the results, however, provided an edited document that contained general conclusions. The FBI believes that Kara-Murza was deliberately poisoned with an unknown biotoxin.

It also follows from the case materials that the FBI investigators had not only blood samples from Kara-Murza after the 2017 poisoning, but also samples of his biomaterials and clothes after the 2015 poisoning. According to the documents, these samples were sent to the FBI laboratory in Quantico, Virginia, but the results of this analysis are classified.

The reasons for editing the document are unknown, but Bellingcat suggested that the materials were classified in the interests of the Russian special services. By coincidence, in the last week of January 2018, the head of the FSB, Alexander Bortnikov, the head of the GRU, Igor Korobov, and the head of the Foreign Intelligence Service, Sergei Naryshkin, flew to Washington. The official reason for the visit is to discuss issues of world terrorism with the FBI leadership.