Julia Vysotskaya shared a sensual photo in a bold swimsuit 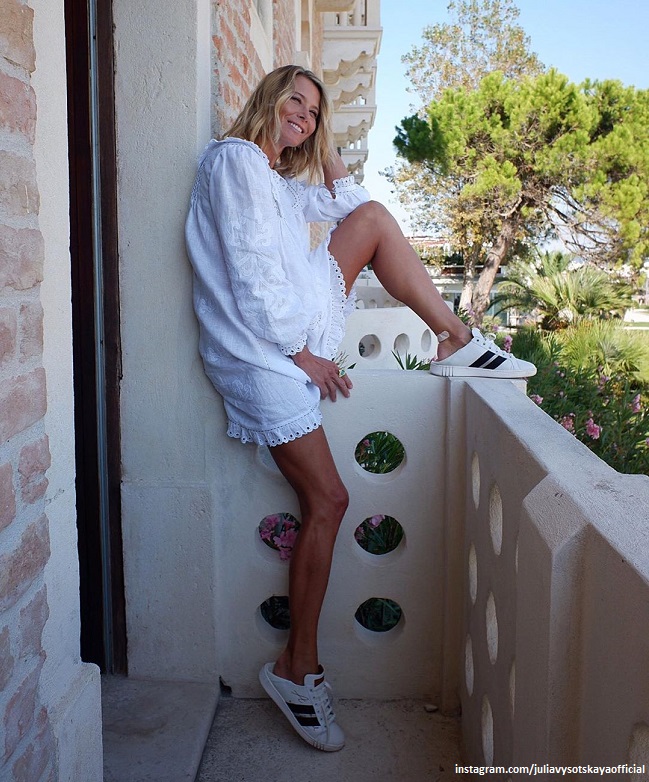 47-year-old actress Yulia Vysotskaya demonstrated at the Venice Film Festival bold outfits with either a bare back or a bare shoulder. And on the eve of the star published an atmospheric photo in a swimsuit.

The famous actress and TV presenter Yulia Vysotskaya spent the last week in Venice, where a new film by her husband, director Andrei Konchalovsky, was presented at the international film festival. Daring images in which the actress appeared in public, caused a heated discussion on the Web. However, these were flowers, and the berries appeared after the closing ceremony.

On September 14, Vysotskaya shared a new black and white photo on her Instagram page. She posed on it, sitting on the sand. The star was wearing a revealing black one-piece swimsuit. The outfit completely bared Julia's back and barely covered her breasts.
The celebrity wrapped her arms around her knees and threw her head back, demonstrating all the dignity of her flawless figure. The picture, taken by the celebrity photographer Sasha Gusov, is incredibly sensual.

"Sasha Gusov was with us in Venice for only one day, but what a day!"- the director's wife signed the shot.

"Julia! Such a pleasure to watch you! Venice and Italy in general suits you very much ❤ ", wrote Vera Brezhneva. "Muse💐 ", noted Elena Valyushkina. "Julia, you are a real goddess❤️ ", Julia Snigir admired.

Fans were also delighted with the photo. "Some incredible calmness and harmony ... and you understand that all this is the result of colossal internal work "," From you, even through photographs, comes incredible admiration and pleasure from the time spent in Venice 💞 ","The photo has preserved its aura and radiates ❤️☀️ ”, netizens were impressed.

During the film festival, Julia managed not only to attend premieres and shine on the red carpet, but also found time for romantic walks with her husband. She went to one of them in a seductive dress with an open shoulder.