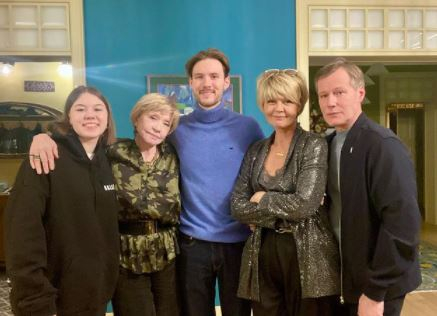 Actress Yulia Menshova delighted subscribers with a rare photo with her mother Vera Alentova. Fans were delighted with the photography.

The star of the film “Moscow Does Not Believe in Tears”, despite being 79 years old, continues to play in the performances of the Pushkin Moscow Drama Theater, in which he has served since 1965. The actress no longer appears in the cinema, so few can see Alentova without a costume and makeup.

The daughter of the theater and film star Menshov showed a photo with her mother and her children. Alentova, in her eighth decade, maintains a slim figure and dresses well, Instagram users noted.

“We do not often get together: due to the profession and the absolute inconsistency in employment schedules, but the sacred dates for our family have always been birthdays and the New Year. Therefore, the “absence effect” this time inevitably should have become especially painful. And so it was, ”wrote Menshova under a joint photograph with her mother.

Netizens supported Menshova, who is experiencing the loss of her father, the outstanding filmmaker Vladimir Menshov. The actor and director passed away at 82 in July 2021.