Interesting facts about the Indian Ocean 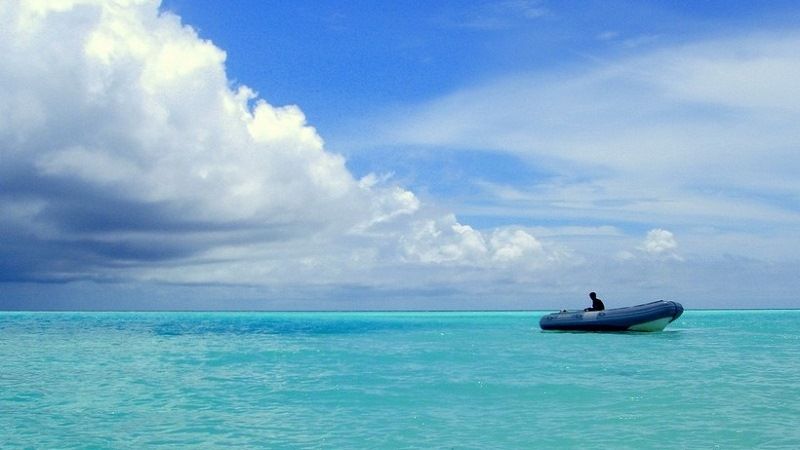 Interesting and unusual about the Indian Ocean

The Indian Ocean is mostly located south of the equator. Temperature indicators in the northern and southern waters differ significantly – from + 29 ° С near the northern shores to -1 ° С in the waters of Antarctica near its coast.

The ocean floor in the very center is cut by deep-water basins separated by mountain ranges and uplifts. The maximum depth (7,130 m) is in the Sunda Trench, and the average depth is 3,897 m.

Favorite vacation spots are the islands of Madagascar, Ceylon, Mauritius, Socotra, Sri Lanka. Their surface is a piece of land left over from ancient continents. The central part of the ocean abounds with many small islands of volcanic origin, and in the tropics there are many coral islands.

The sea, where the warmest and saltiest water

Although the coastal area of ​​the Indian Ocean is very large, it has only one inland sea – the Red Sea, located between the African and Eurasian continents. In its place there was once land, but as a result of a tectonic fault, a huge deep depression with an area of ​​450 thousand km² was formed. The average depth is 437 m, the greatest is 3,040 m. 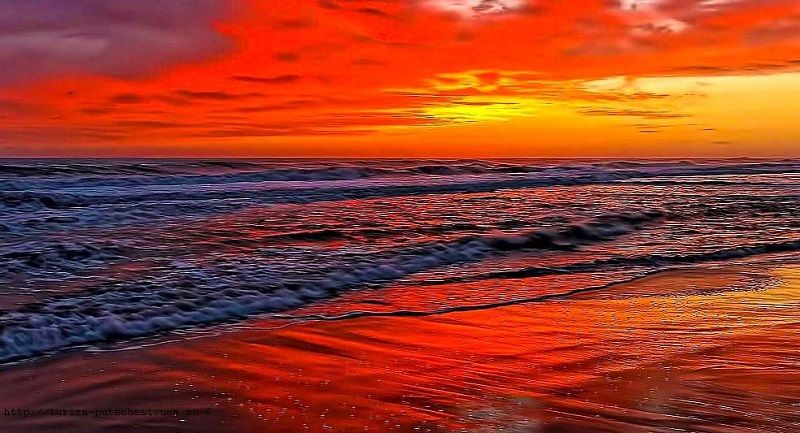 The uniqueness of the sea is also in the fact that not a single river flows into it, therefore the water in it has the highest salinity in the world and, moreover, it is constantly growing. This is explained by the constant intense evaporation (5 mm daily) and the lack of fresh water, and salt water comes from the ocean, maintaining the sea level within certain limits.

The water in the sea is clear and crystal, since there is no drift of muddy fresh water from the rivers. Divers report excellent visibility over 50m.

Another interesting fact is that there are two currents in the sea, and their waters do not mix. The border between them can be seen by the color of the water, which is significantly different.

Many species of plants and animals that inhabit the water area of ​​the Red Sea are truly unique, and such a population density and diversity of animal species in the water bodies of the Northern Hemisphere is no longer found. Almost 50% of all species of animals living in the Indian Ocean live in the Red Sea, and some species (over 20%) are not found anywhere. 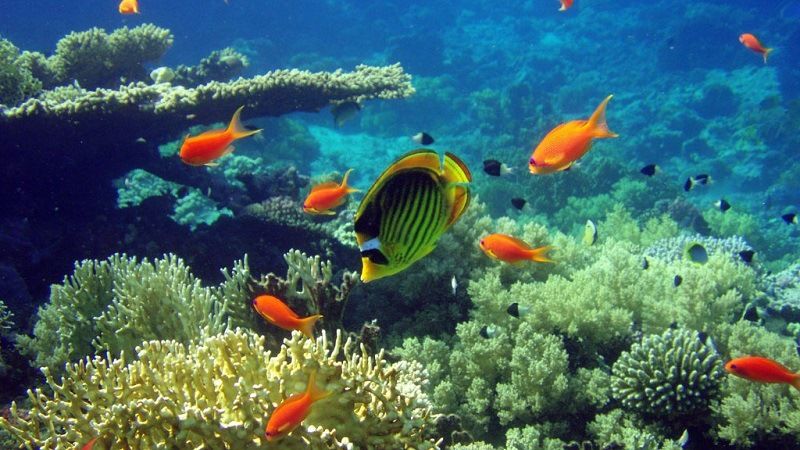 Unusual inhabitants of the Indian Ocean

The fauna of the Indian Ocean is amazing and diverse. Among its inhabitants there are completely unique ones, which can be seen either only here or in the nearby waters of the Pacific and Atlantic oceans.

The name “Indian lionfish” is unusual for fish and owes its appearance to the fins – when extended, they look like wings. If you look at the fish from the front, then the fins vaguely resemble a lion’s mane, which gave rise to another name – lionfish. 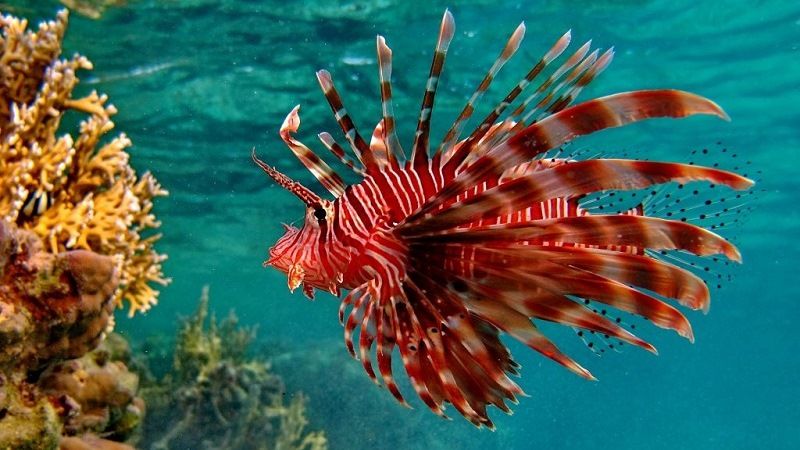 An unusual fish (35 cm long) lives in the waters of the Pacific and Indian oceans near coral reefs. Most of the time she is inactive and rests from hunting in crevices of rocks and between stones. Fins with thorns serve to protect against the attack of predators, which she spreads in any danger.

Interesting! The lionfish can swim in any position, can roll over and lie on its side.

The fish is poisonous – a bright color and stripes on the body warn about this. The grooves on the rays of the dorsal fins contain the strongest poison, and the more injections the victim receives, the more poison will enter his body. For fish, the effect of the poison is fatal, and in humans, after a poisonous injection, painful shock occurs.

This unusual name is given to the poisonous jellyfish that lives in the Indian Ocean. Most often it is found off the northern shores of Australia, therefore it is “Australian”, and “wasp” because it “stings” like a wasp – from the touch of the tentacles, the skin becomes red and swells strongly. 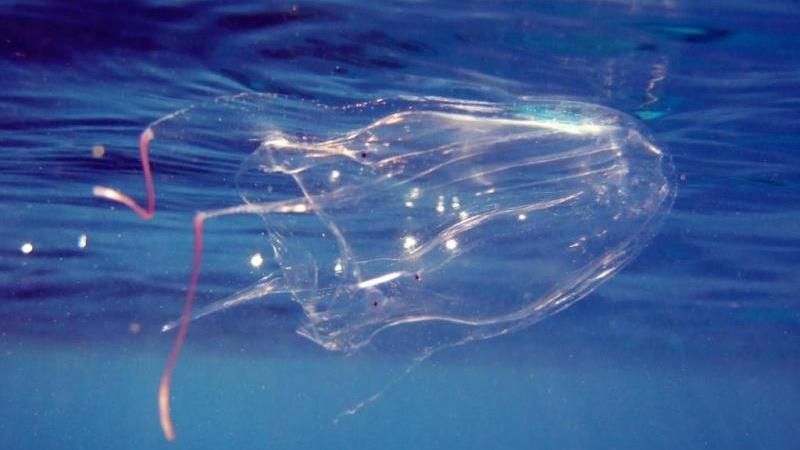 Jellyfish is 98% water, and it is difficult to see it in sea water. The weight of large representatives of the species reaches 3 kg, the girth of the dome around the perimeter is 45 cm.

From the dome, there are bundles of tentacles (60 of them), on which stinging cells with a deadly poison are located. When the jellyfish is calm, the tentacles are small – only 15 cm, but when attacked, they straighten and reach a length of 3 m.

Interesting fact! The poison of one jellyfish is enough to kill 60 people in three minutes.

A mystery to scientists is that it has 24 eyes – six at each corner of the dome. Two eyes react to light, four to the image of an object.

As a rule, a jellyfish does not chase after prey, but lies in wait for the victim and inflicts a “bite” by touching with tentacles. The more touches, the more poison the victim will receive. The jellyfish devotes to hunting in the evening, and during the day lies at the bottom.

For humans, the Australian wasp is very dangerous and to protect vacationers, bathing areas are fenced off with a fine net. She herself does not attack a person, touch, most often happens by accident, since she is not visible in bluish water.

The rag-horse is an inhabitant of the Indian Ocean and is not found anywhere else. Most often it settles in the coral reefs of coastal waters off the northern part of Australia at a depth of up to 20 m. 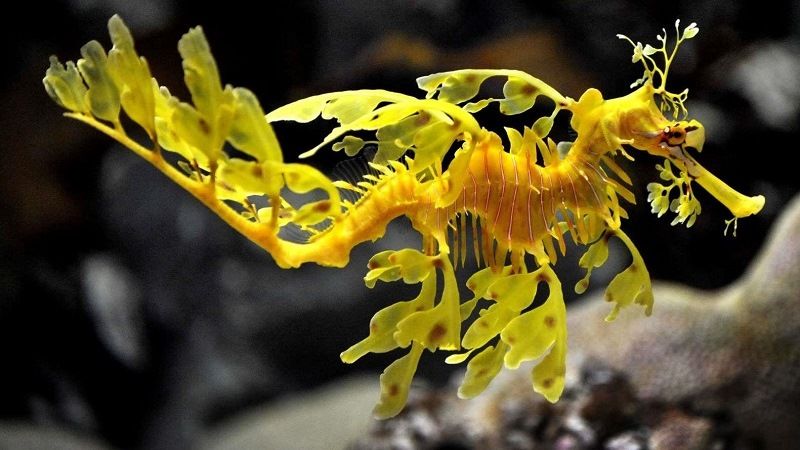 Interesting! The yellow color of a small fish (up to 30 cm in length) changes depending on the environment – this is how it is masked. Algae-like growths on the body are also needed for camouflage. The fish got the name “rag-picker”, apparently, because of these hairy long growths.

Amazing islands of the Indian Ocean

In the ocean area there are many islands of various origins and are sometimes at a distance of several thousand kilometers from each other. Among them there are unusual and truly unique islands and islets.

Christmas Island in the eastern part of the Indian Ocean, 1,600 km off the coast of Australia, is of volcanic origin – its surface is the summit of a huge underwater volcano. The area of ​​the island is small – 135 km² (18×17.5 km2). The bottom, gradually lowering, drops off abruptly 200 m from the coast and goes 5,000 meters deep. 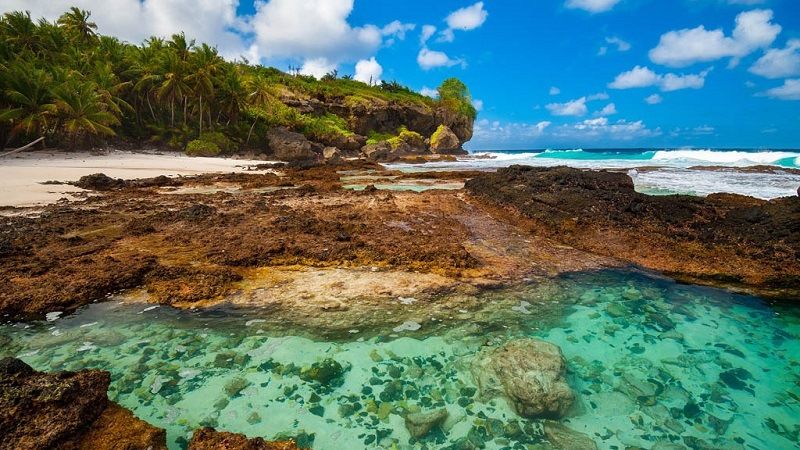 On a note! The island was discovered on Christmas Day (1643), which is why it was named after the holiday. It is now operated by the Australian government.

For almost 100 years, calcium pyrophosphate was mined on the island, due to which the population grew. After the cessation of mining, the number of inhabitants decreased and today about 2,000 people live on the island.

The average temperature is around + 27 ° C throughout the year and there are always tourists here, which gives the local population the opportunity to earn money.

In November, about 100 million red crabs leave the coastal forests and flock to the coast to lay their eggs. For them, they even arrange special crossings over roads and dangerous places. 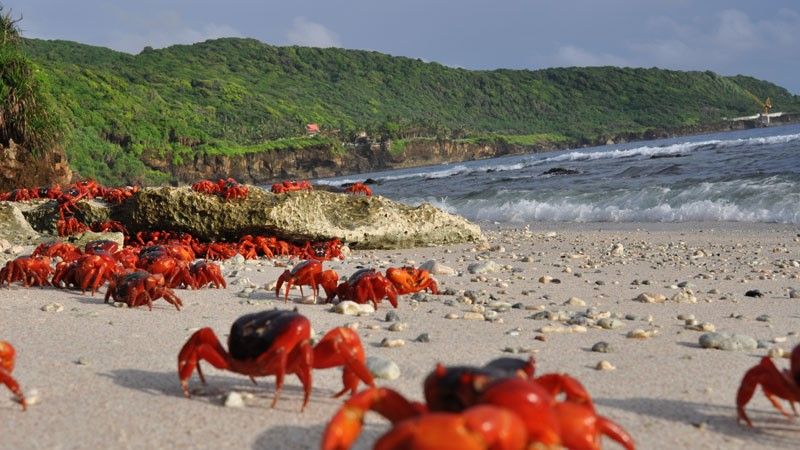 It would seem that we know almost everything about the island territories in the Indian Ocean: geographical location, population, life features, climate, interesting facts about plants and animals, but it turns out that there are dark spots in our knowledge.

As part of the Andaman Islands, there is a small island with a pristine nature untouched by civilization – Sentinel Island, about which there is practically no exact information.

The Sentinelos Aboriginal tribe lives on a small 62 km² islet covered with dense rainforest. They are called the contactless tribe because they have no contact with the modern world. Observations of the island are carried out from a distance: from helicopters, aircraft passing by ships.

It is not possible to find out details about the tribe – outsiders are not allowed there. As soon as a stranger approaches the island, the inhabitants take up defensive positions and begin to shoot from bows. To avoid infection, all contact attempts have been terminated. 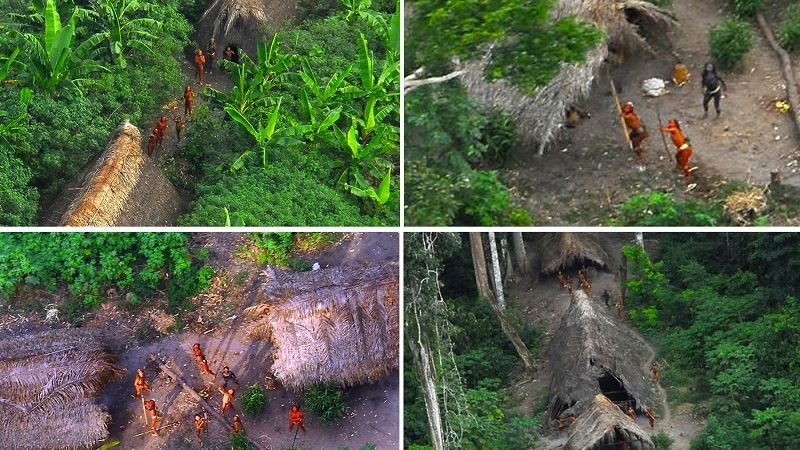 Interesting! It is estimated that the tribe is 55,000 years old and now has 50-400 inhabitants. The language of the tribe is incomprehensible to anyone, even to the inhabitants of the nearby islands. The tribe knows nothing about the modern world, or that the island belongs to India.

Aboriginal food consists of coconuts, sea fish, turtles, birds. For hunting, they use spears with tips from the metal remains of dead ships.

Secrets of the Ocean

Unusual and mysterious facts about the Indian Ocean excite the minds of researchers and those who see the presence of alien civilizations in everything. Solving its riddles and secrets takes time and effort.

For the first time they started talking about a strange object in 1983. A US military officer was on routine duty on Diego Garcia Island when he noticed an unusual bright yellow glow underwater. Almost immediately, the light changed to a blood red, and an oblong, silvery object emerged from the water. He quickly soared into the air and disappeared from sight.

After the report of the strange phenomenon, research was carried out, but no changes in the environment were found. 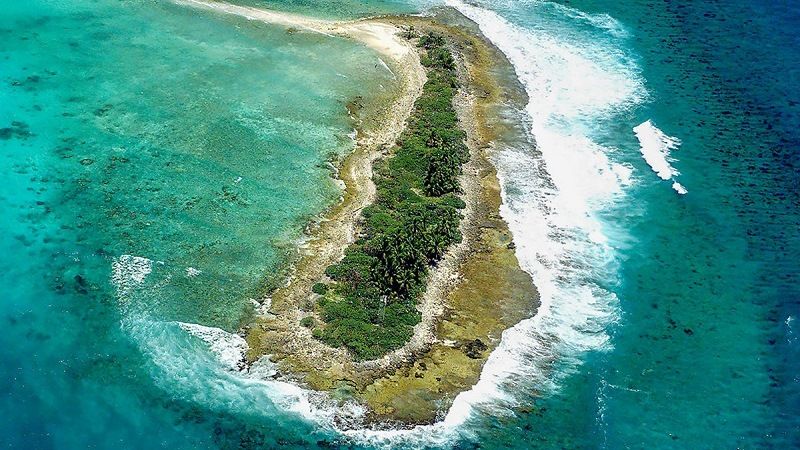 A little over a year passed, and at about the same place the pilot noticed a silvery oblong object that was moving in parallel. After a couple of minutes, he descended and disappeared under the water, leaving no trace of his presence.

In 1987, a similar picture was observed from a boat passing by and managed to be recorded on film. But all the documents and the tape were classified. The mystery of the strange object remained unsolved.

This event took place in 1998, when a group of kitesurfing fans arrived in the Cocos (Keeling) Islands in the Indian Ocean. Once during a swim, the weather changed dramatically, and one of them was carried into the ocean.

When he was floundering in the water in a life jacket, he noticed flickering lights around him, located in a circle, and the water in this place became hot and boiled. The victim swam to the side and from there watched what was happening.

A silver object of a round shape appeared out of the water and, swaying, swam for some distance, then, rising into the air, hovered for a while above the water, and then sharply gained height and disappeared.

After the young man was found and taken ashore, he told about his observations, but no one was interested in his story except ufologists. And their piggy bank of interesting and unusual phenomena and facts was replenished with another evidence of the mysterious and inexplicable happening on Earth.