At the moment, there are about 2.6 million cities on Earth. Settlements of this type have a long history – they arose about 6000 years ago on the territory of Ancient Mesopotamia. Subsequently, cities began to form in various parts of the globe: in the Middle Ages, Nanjing and Beijing appeared in China, Cairo in Egypt, Vijavanagar in India.

Europe did not lag behind other states – in addition to Paris, London and Milan, many cities were formed here, which continue to remain interesting for both locals and travelers to this day. 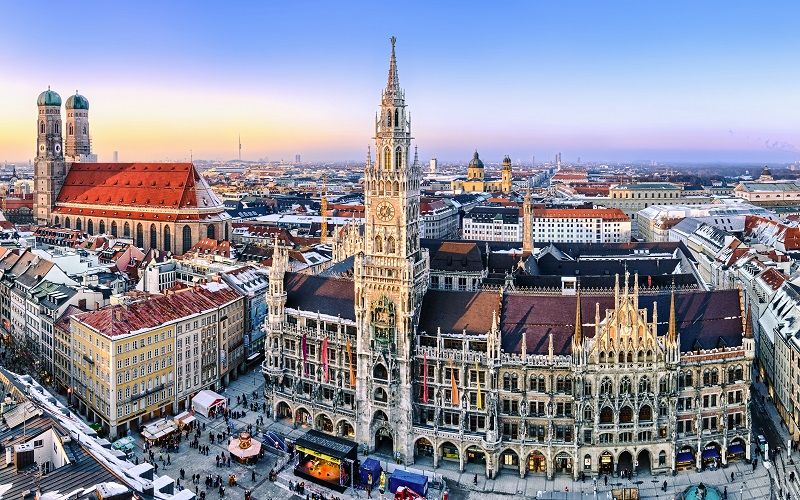 One of the most interesting European cities is considered to be Florence, which belongs to the state of Italy and is the administrative center of the Tuscany region. The history of Florence, which means “blossoming” in Russian, begins as early as 59 BC – it was then that a settlement of Roman retired soldiers was formed in a picturesque place surrounded by the rivers Arno, Terzole, Greve and Munion. 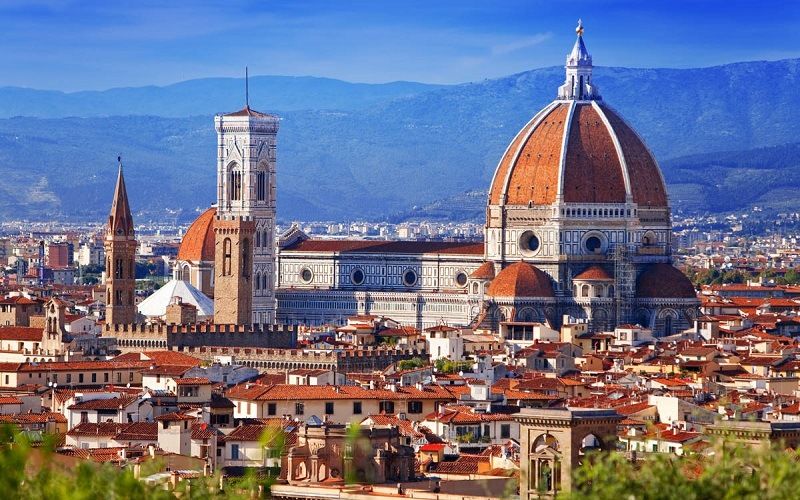 Subsequently, already in the 10th century, Florence turned into an independent and autonomous commune. The city became the cradle of progress and fully justified its beautiful name, because it was here that the following actively developed:

Florence was the birthplace of the poet, philosopher and theologian Dante Alighieri, whose most famous work was the poem “The Divine Comedy”, written in the period from 1308 to 1321. Thanks to Dante’s literary activity in Florence, a special Tuscan dialect was formed, which formed the basis of the entire Italian language. Florentine streets and suburbs turned out to be native to many other prominent figures – the artist and inventor Leonardo da Vinci (1452-1519), the sculptor Michelangelo Buonarroti (1475-1564), the founder of the sculptural portrait of Donatello (1386-1466), and others. 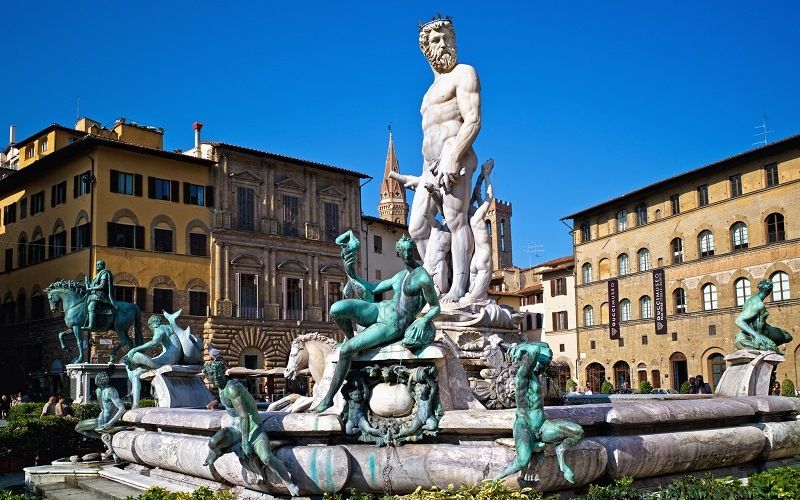 However, it should be remembered that at the moment respectable Florence is an expensive city that will require significant expenses from any tourist. It is better to come here in March / May or September / October, because during these periods the traveler will not encounter high humidity, or stifling summer heat, or the rains characteristic of November.

Another interesting European and, in particular, Italian city is Venice, which currently has a population of about 262,000 people. The name “Venice” came from the Veneti tribe – people who lived in these territories during the heyday of the Roman Empire. 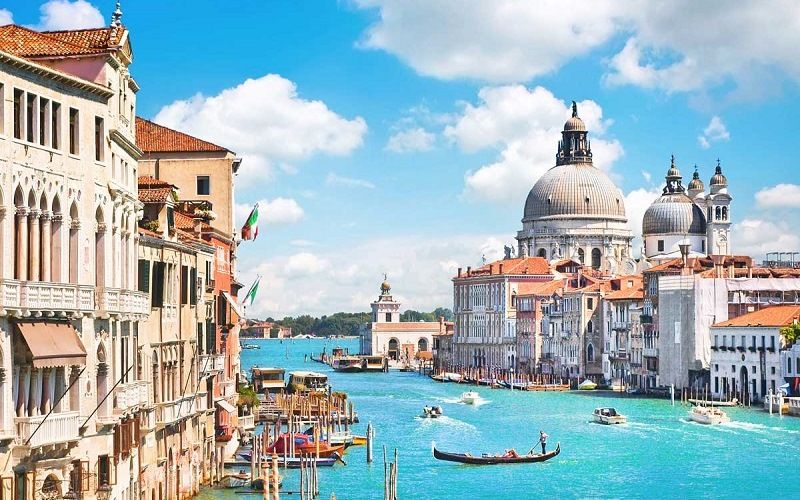 However, the large-scale settlement of 118 islands, on which the city actually rests today, began later – only in the 5-6 centuries AD. The final structure of Venice took shape only towards the end of the 9th century.

About 20 million tourists come to fabulous and romantic Venice every year. Traditionally, travelers order water excursions along the canals of the city on gondolas – Venetian rowing boats that were once used by people as the main means of transportation and communication with each other.

It is interesting! Despite the fact that most of the structures were erected here in the Middle Ages, the buildings continue to safely rise above the city’s 150 canals and 400 bridges today.

The use of alpine larch helped the Venetians to prevent the rapid destruction of buildings – it was from this tree, which does not rot in water, that the inhabitants made piles. 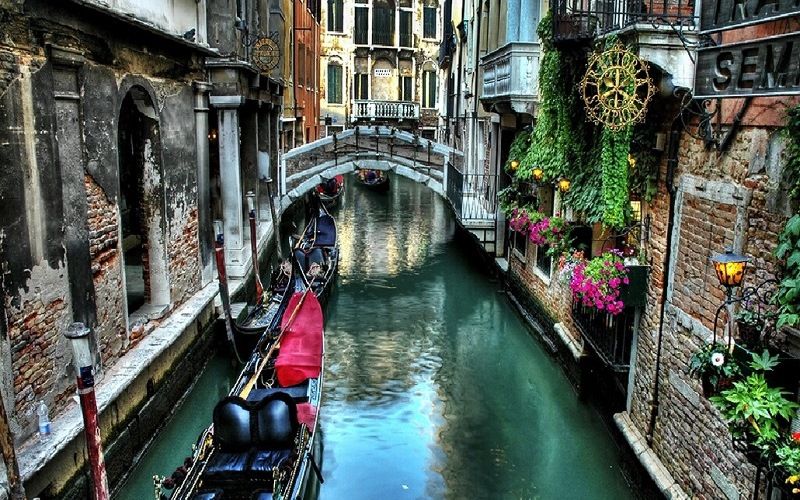 It is recommended to visit the city in spring or autumn, but if a traveler has a desire to enjoy the noisy and beautiful Venice Carnival (Carnevale di Venezi) annually organized here, then you should come in mid-February. Despite the fact that during the period of the festival prices skyrocket, hardly anywhere else abroad a person will be able to feel so strongly the atmosphere of enchanting mystery, mystery and mysticism. Once upon a time, even during Roman rule, the local carnival was dedicated to the praise of the god Saturn, the patron saint of agriculture.

However, with the advent of Christianity, the purpose of the festival has changed – the carnival has become for people the last outlet and the opportunity to walk in full before starting the forty-day fast preceding Easter. Today, the Vnezian carnival is a large-scale event, the main attributes of which are luxurious costumes and masks made of leather or papier-mâché. 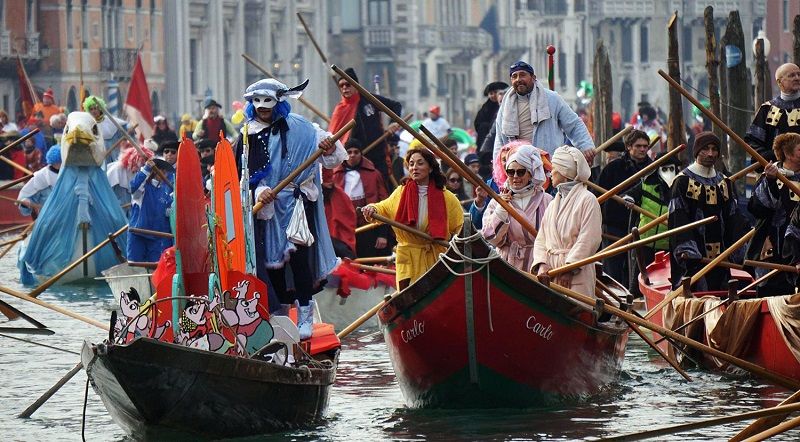 Interesting fact! At the moment, masks are only a traditional carnival attribute, while earlier they had a practical value. The fact is that in any of the Saturnalia (holidays dedicated to the god Saturn), people who are in different social and social classes became equal to each other. So that the master could interact with the slave and sit with him at the same table without hesitation, people came up with the idea of ​​introducing masks into use.

The next historic city in Europe is the Belgian Bruges, which today is home to about 117,000 people. Bruges reached a particular peak of its development during the high and late Middle Ages, i.e. from 12th to 15th centuries Despite this, the city, which arose in the local lands as early as the 3rd century AD, has always demonstrated economic stability. 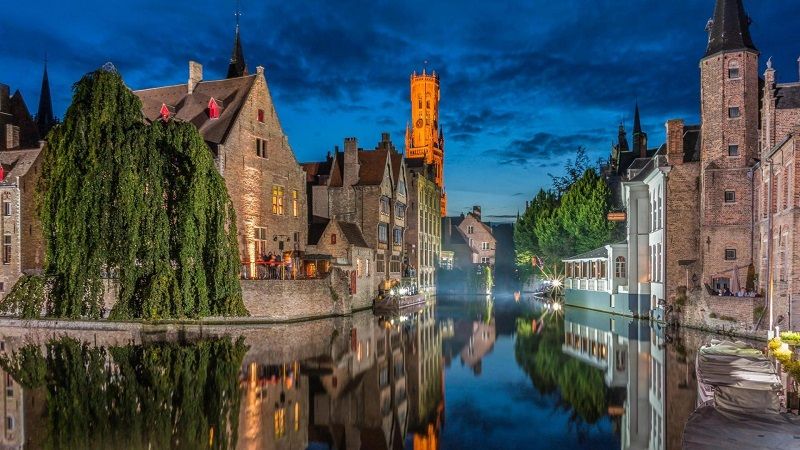 The entrepreneurial spirit of local residents who quickly established maritime and trade links with neighboring countries, incl. with England, led to the fact that with the onset of the Middle Ages, Bruges turned out to be one of the richest European cities! It was then that unique architectural monuments were built here, namely the Gothic Church of Our Lady (1210-1549), the Cathedral of Christ the Savior (1116-1118), the Jerusalem Church, repeating the original Israeli Temple of the Holy Sepulcher, and many other monuments.

Interesting fact! Sometimes Bruges is even called “Venice of the North”, because one of the city’s attractions are also 3 large and connecting water channels – Rozenhoedkaai, Groenerei and Minnewater. They are used for tourist purposes for boat excursions.

Despite the fact that Bruges subsequently lost its former greatness due to the short-sighted policy of local authorities, internal squabbles and enduring turmoil, this calm European city has forever retained the atmosphere of a deeply historical place. To enjoy the cathedrals, museums and galleries of Bruges, you do not need to choose the right season, because the weather here is the same throughout the year – the climate is largely determined by the proximity to the North Sea, located 15 km to the northwest.

Cloudy skies and rains give way to temporary dryness and warming in late spring and summer. However, seasoned travelers are advised to visit Bruges for the Christmas holidays – thanks to the spicy smells spreading through the city from the market stalls of the Market Square, and the light of garlands, the historic city center becomes a truly fabulous place.

One of the most visited cities in Europe continues to be Prague – the capital of the Czech Republic with a population of 1.28 million. The founders of the city are the ancient Slavs, who settled the territory of modern Prague as early as the 6th century AD. Gradually, the settlement was surrounded by fortress walls. Around them, other settlements began to form, which later turned into suburbs – these are Kralovske Vinohrady, Zizkov, Karlin, Vrsovice, Nusle, Smichov, Koshiře, Podoli, etc. 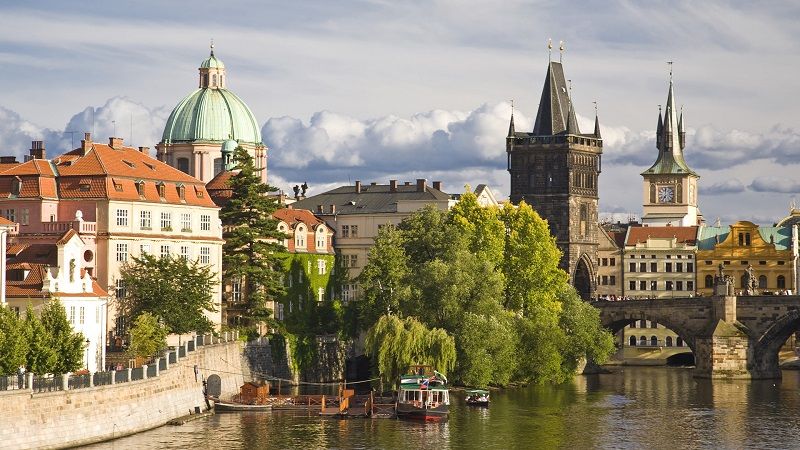 During the Middle Ages, many architectural structures were erected in Prague, which later became the most famous city attractions. In particular, we are talking about:

Many districts of Prague even have the status of “architectural and historical reserves”. However, travelers come here not only to enjoy the works of architecture, but also to taste the unique delights of Czech cuisine. 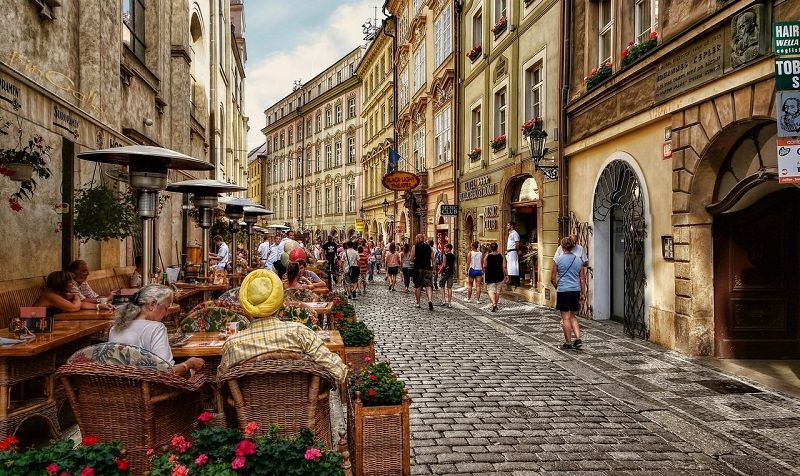 Thus, Prague is famous for its high-calorie dishes of pork, beef, various types of cheeses, etc. Special attention should be paid to the Czech branded beer produced by famous breweries such as Budweiser, Krusovice, Kelt, Pilsner, Gambrinus ”and others. You can visit the city at any time of the year, but it changes in a special way with the arrival of the Christmas holidays.

One of the most interesting and fun European cities is Amsterdam – the capital of the Netherlands since 1814. The name of this settlement can be translated into Russian as “a dam built on the Amstel River”. Such a dam was indeed erected on October 27, 1275 – from that moment on, Amsterdam began its history. Today the city is home to about 801,000 people. In addition, about 4.2 million tourists come here every year. 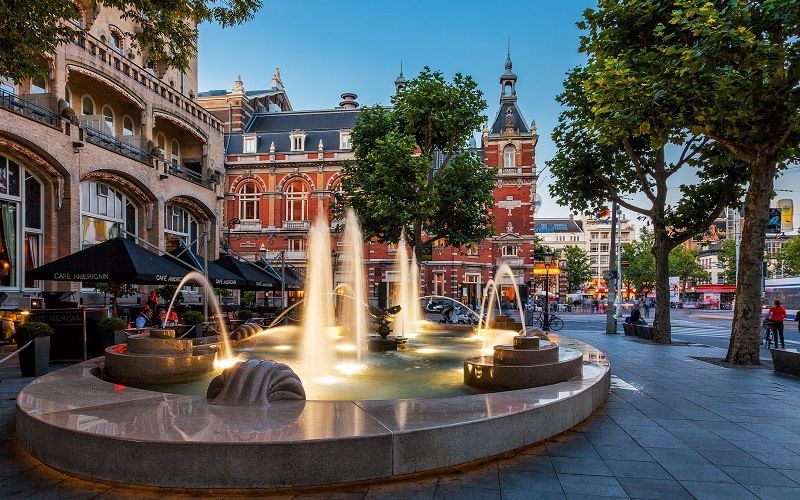 During its long existence, Amsterdam has acquired many attractions. We are talking about:

Today Amsterdam attracts tourists not only due to its cultural attractions, but also due to its reputation as a city with free morals. So, here is the world famous red light district with its brothels. 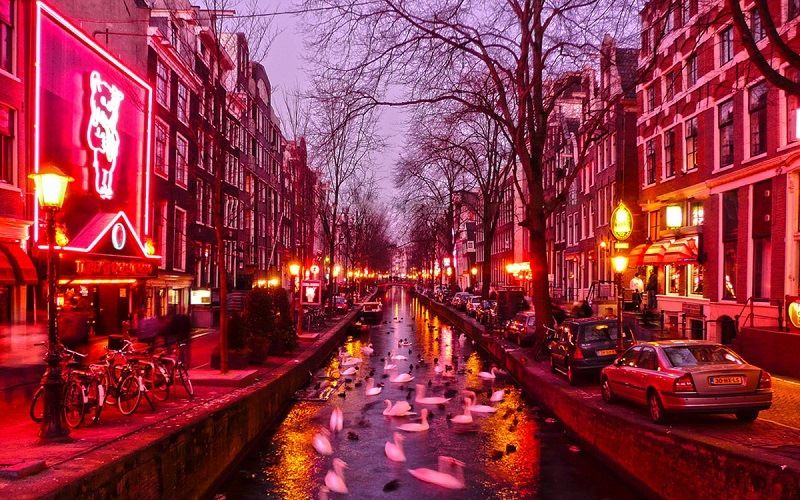 In addition, in Amsterdam, the sale and purchase of marijuana in specially designated “coffee shops” is officially allowed. The atmosphere of colorful lightness, absolute freedom and enchanting energy is complemented by various large-scale events, such as Pink Saturday (Amsterdam Gay Pride, parade of representatives of the LGBT community), Amsterdam Dance Event, intended for electronic music lovers, Contemporary Art Festival (Amsterdam Art Weekend), scattered literally throughout the city, and many others.