In Russia, honey will rise in price, as bees have been poisoned again

Immediately in 14 regions of Russia, mass death of bees was noted. This is information from the Federal Scientific Center (FNTs) of beekeeping.

The reason is banal stupidity and negligence: the bees were poisoned with pesticides. And it’s not only bad for honey lovers. Indeed, without bees there will be no harvest of all flowering plants, and these are dozens of types of vegetables, fruits and berries.

There has not been such a mass death of insects useful for agriculture in Russia since 2019. Then, too, many bees died from the treatment of fields with pesticides. The agrarians, who cultivated the fields from pests, did not consider it necessary to warn the beekeepers in time to close the hives and move the apiaries away.

For some time after the intervention of the Ministry of Agriculture, which gave instructions about bees to the peasants, everything was quiet, calm. But then other people came to work in the fields who did not know about any instructions from the department, and again the pestilence of bees: this has never happened before.

Especially a lot of bees were poisoned in Altai. In the Altai Territory, 19 appeals have already been received about the death of bees. Checks are going on. In a number of cases, positive reactions to pesticide residues have already been identified. This summer also came news from the fields about the mass death of bees from chemicals in Udmurtia, Omsk, Sverdlovsk regions and a number of other regions. There is a version that late spring also contributed to the death of bee colonies. Rape, for example, began to be processed late. And this coincided with the time of the honey collection.

It is very difficult to get compensation for ruined bee colonies from farmers in court. Beekeepers have to collect evidence themselves, pay for the expertise, notify the agronomists who made this outrage. Moreover, the court may consider the evidence insufficient and make a decision not in favor of the beekeepers. 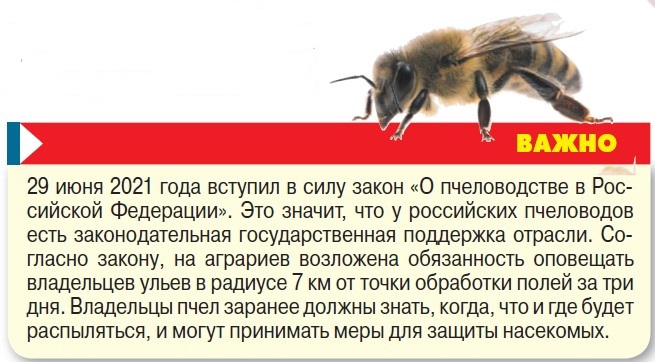 Therefore, the Federal Scientific Center for Beekeeping is sure that a special law is needed to regulate relations between farmers and beekeepers. Bees need to be protected. There are fewer and fewer of them on the planet, because not a single country in the world already grows crops without tons of fertilizers and plant protection products from insects. Bees are “knocked down” by mobile communication stations and are harmed by car exhaust fumes. And if bees completely disappear and there is no one on the globe to pollinate plants, what will we eat then?

HOW TO WARN BEEKEEPERS

Currently, the law requires beekeepers to be notified of field treatments no later than three days in advance. Farmers usually advertise this in the newspaper. But since newspapers are now being published less often (and in some places local media have gone bankrupt altogether), and people have begun to read less paper press, few people see these ads.

Beekeepers offer to report field treatments no earlier than five and no later than three days before they are carried out. In addition, do not limit yourself to only ads in newspapers. It is necessary to create a unified notification system for beekeepers in each region and not to neglect ads on various specialized sites. They are well known to farmers as well.

After all, farmers need bees too: without them, there will be no harvest. So you just have to learn how to talk and negotiate with beekeepers.