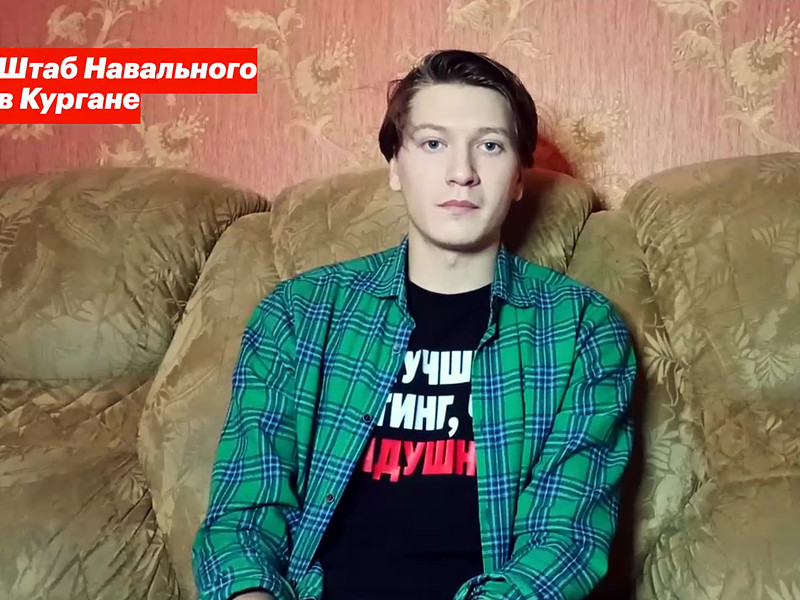 In Kurgan, the police detained the coordinator of Navalny’s regional headquarters, Alexei Schwartz, who came to the building of the Investigative Committee for interrogation as part of a criminal case opened under article 328 of the Criminal Code of the Russian Federation. The headquarters reports about this in its telegram channel.

The police seized the phone from Schwartz and took him away “for a medical examination.” In fact, the activist disappeared, there has been no connection with him for more than five hours, OVD-info notes.

A criminal case against Schwartz was opened in early November, allegedly due to the fact that he was evading military service. At the same time, according to the coordinator of the headquarters, he regularly visits the military registration and enlistment office on summons and has never evaded attendance.

In September 2020, the head of the military registration and enlistment office attacked Alexei Schwartz. In August, Schwartz was handed three summons to the military enlistment office. This was preceded by an interrogation at the Investigative Committee on the case of evading military service (Article 328 of the Criminal Code). At the same time, two weeks earlier, Schwartz answered the investigator’s questions in the correspondence on VKontakte.

This is not the first case of such pressure on the supporters of opposition leader and founder of the Anti-Corruption Foundation (FBK) Alexei Navalny. So, in December 2020, Nikita Ilyin, an employee of the Kurgan headquarters of Navalny, had his military ID canceled. It is also known that Nikita’s elder brother Ivan died seven years ago while serving in the army. According to the military, Ivan committed suicide because “he could not cope with the hardships of the service.”

In accordance with the law, brothers of people who died in connection with the performance of military duties are exempted from conscription, Radio Liberty notes. However, in the military commissariat of the Kurgan region, Alexei Shvarts was told that his brother’s death “occurred during his military service under circumstances not related to the performance of official duties.” On this basis, the military card was canceled.

On May 13, 2020, an employee of the Omsk regional headquarters of Navalny, Yevgeny Rudkovsky, was summoned to the military prosecutor’s office because of doubts that he was not fit for service. And on December 23, 2019, FBK project manager Ruslan Shaveddinov was detained in his own apartment. On the same day, the Moscow City Court recognized the decision of the draft board on his fitness for service as legal. A day later, it became known that Shaveddinov was in a military unit on Novaya Zemlya. In December 2020, he returned home after a year of service.

Besides Shaveddinov, FBK IT specialist Artem Ionov was forcibly sent to the army. And in July, Ivan Konovalov, the press secretary of the Alliance of Teachers independent trade union, was “stolen” into the army. This union was created by an activist from Navalny’s headquarters.

Ionov said that during the service his asthma worsened, after the deterioration of his health they wanted to dismiss him, but then changed their mind. “The authorities have long been using military service as an instrument of repression against Navalny’s supporters. In Nikita’s case, they have crossed all borders – for the sake of repression, they are already desecrating graves,” said Alexey Shvarts.

Opposition leader Alexei Navalny’s staff and volunteers regularly face various forms of politically motivated pressure from the state. Thus, within the framework of a criminal case on money laundering, FBK was searched at headquarters employees throughout the country. This did not seem enough to the authorities, and on December 29 it became known about the initiation of a criminal case on fraud: allegedly Navalny and “other persons” stole part of the donations collected by the FBK, which were then spent on his personal needs.