In an accident "KamAZ" with a bus of a children’s basketball team, in which 5 girls died, a VAZ driver was accused (VIDEO) 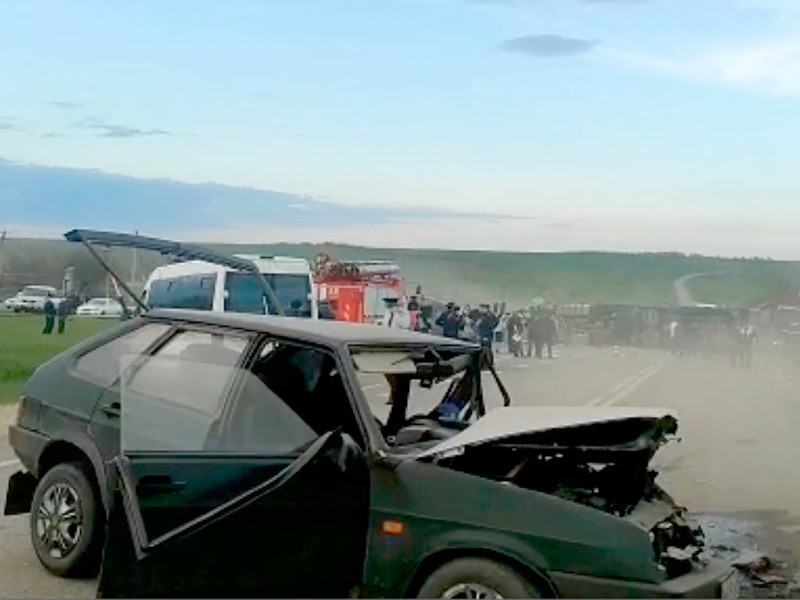 The preliminary cause of the accident in the Stavropol Territory, in which 5 girls from the children’s basketball team died and 9 more people ended up in the hospital, was a violation of traffic rules by the driver of a VAZ-2109 car, which collided with a KamAZ truck, after which he crashed into a minibus with children …

According to the head of the regional traffic police Alexei Safonov, on the eve at 16:40 the driver of the Lada on the 535th kilometer of the Astrakhan-Stavropol highways cut a DAF truck, after which the multi-ton car overturned and crushed the Mercedes Sprinter minibus, which was carrying children to the competition from Volgograd to Cherkessk. In total, there were 14 pupils of the sports school of the Olympic reserve N2 and four adults on the bus. Five children have died. According to the source, the children were between 12 and 14 years old. Nine more people were injured, they were hospitalized.

On the morning of May 1, three injured girls are in extremely serious condition, three more are in serious condition, said Mikhail Annenkov, chief freelance children’s anesthesiologist-resuscitator of the Stavropol Territory. The condition of two more girls is assessed as moderate. All of them have severe injuries caused by a combined lesion, that is, skeletal injury and damage to the central nervous system.

The Ministry of Health of the Russian Federation sent a team of specialists from federal centers to Stavropol to provide assistance to the victims. The team includes a neurosurgeon, resuscitator, surgeon and specialist in disaster medicine.

Travel to the competition was not agreed

The director of the Volgograd school of the Olympic reserve N2, Tatyana Astafieva, said that the tournament in Cherkessk, to which the children’s basketball team was traveling, is included in the school calendar of competitions. According to her, the school regularly participates in a tournament dedicated to the revival of the Karachai people.

But the Volgograd Regional Basketball Federation told TASS that the competitions attended by the basketball team of the sports school from Volgograd had not been agreed with anyone.