Igor Vernik: “A smile is a deception. In fact, I am very gloomy. “

Everyone knows Igor Vernik. Well, almost everything. He hosts TV shows, acts in films, plays on the stage of the Moscow Art Theater …

But we talked with the actor about the side of his life that has been in the shadows all this time. As it turned out, Igor keeps a diary from childhood, from his youth he writes poetry and ironic stories. And finally, he decided to publish all this, having released a book, which he called “Abandoned Texts.”

“MEMORIES FILLED ON ME … IN THE FORM OF A CARDBOARD BOX”

– Igor, what does this book mean to you? Long doubts before releasing it?

– This is an important event in my life. I write poems, notes, keep diaries, write some texts … Only my close people know about this. And initially, I was not even going to declare my hobby to a large audience. However, somehow this flywheel started spinning, all of a sudden everything came together … Many times I was offered to publish a book of my impressions, acquaintances, descriptions of my life path. And it seemed to me that it was necessary to write such things, when you already lay down on the couch half-lifeless and began to remember. That is, while one has to live, one must penetrate into this life, act, and remember only later! And then I arrived at my parents’ apartment, went out onto the balcony, and there was such an old, old wardrobe, probably three hundred years old. And a cardboard box fell on top of me, where my children’s notes ended up – these are these abandoned, seemingly forgotten texts forever. And it kicked me in: it was like some kind of sign! I began to read, it all flooded: some memories, some childhood dreams, my ideas about how my life would turn out. And I decided that everything should be collected and published. And then my poems, for example, were constantly lost: on the plane on a napkin you will write down some and then you will not find it. That is, I never wandered, like Koschey, over the gold of these my poems! (Laughs.) And I had to sit down, dig into my notes, see what is, what can be published … This is what I was and what I have become. And it is still unknown what I will be …

– But this is your first book?

– Yes, this is my first experience. And this book is dedicated to my parents. In the house they always read everything, and my mother would endlessly write some notes to us with her brother. These are compositions, congratulations to friends, and postcards that dad wrote to mom … That is, we have always had this need to put feelings into words – I grew up in such an atmosphere. Maybe I would not want to write, but there was nowhere to go! (Laughs.) Every word in this book and every space is dedicated to my parents. Mom is no longer with us, and dad was the first to read this book (People’s Artist of Russia Emil Grigorievich Vernik is 96 years old. – Ed.). He constantly asked about her and waited for her to come out. 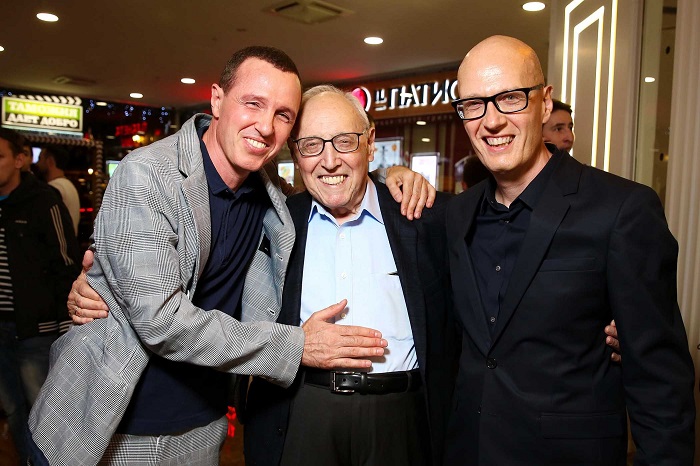 With dad and brother

“I scatter my whole life”

– You often smile, talk about something with humor. Do you always treat life this way – lightly, with a smile?

– No, actually I’m different. This is how I only seem. Now I am talking to you and talking a lot, smiling, gesturing with my hands. In fact, I am a very gloomy and complex person. And my brother Vadim, for example, knows this very well.

– So what was your task when you wrote the book? Show yourself as you really are?

– Yes, I did not have any tasks. I’m not going to show myself to anyone, to demonstrate, to show. I have long understood that I do not want to be a kind guest in every home, treated kindly and loved. This is impossible and unnecessary. I am that I am. It was interesting for me to collect myself. I’ve been scattering myself all my life. And this phrase “Time to collect stones” is just now relevant to me. Now that I have collected them, these stones, I can scatter again. That is, this book was simply important to me.

– But not all famous people are ready to share their secret with the general public.

– No, it’s important to open up. Especially for the actors. We are generally here to open up. But what should be the degree of frankness in this case, it’s hard to say. There is no indication: how much percentage you, for example, have to do … The diaries contain entries related to my rehearsals in the theater, my meetings on the site, personal meetings – these are entries related to my family, my son and his first school stories. Initially, I promised myself in my diaries not to philosophize, but simply to record life, because it flies by day after day: from an airplane to a train, from a train to a bus, and so on. You just had to fix pieces of your life. This is also my declaration of love for my parents, childhood, adolescence. And I wanted to publish it, because it’s interesting. There are stories about how we lived, how my parents used to live. For example, about how we went to the military store for groceries in childhood. And it was only comparable with a visit to the Tretyakov Gallery, because it is still unknown what struck you more: paintings or these products on the shelves in a closed area. Or, for example, a story about how our first car, a Zhiguli, appeared in our family. It was a shock, because the parents understood that they could only buy a “Zaporozhets” and would pay for it for another ten or fifteen years. But dad at work was suddenly told: “We just thought: you are still the main director of the literary and dramatic broadcasting of the All-Union Radio and you are entitled to Zhiguli by your status. Dad came home white – mom thought that everything, he was fired! And he said: “Anya, Zhiguli!” And this was one and a half thousand rubles more! And I remember how we, little ones, sat and looked at our parents, and they thought where to find money: it was already inconvenient to refuse, because there was a line in which the entire Soviet Union stood!

– Yes, these are memories of time. And you probably have a lot of such stories …

– Yes. And here’s another one for you. My dad went to put on exchange radio shows in socialist countries. He was in Hungary, East Germany, Yugoslavia, like once in Czechoslovakia. And my brother and I were always looking forward to his return. He brought money from there – there was some change left, and he left it in the hope that if he went again, this money might be useful to him. Mom put it all in a box. I found this when my parents were leaving, took out the box, took out the pieces of paper I did not understand, laid them out, counted. And at that moment it seemed to me that I own the whole world! Then it turned out that all this money could only buy a tray. (Laughs.)

“DO NOT AGREE WITH MASHKOV”

– Igor, when did you write your first poems?

– In the hospital! (Laughs.) When I was born first, and then Vadik (Vadim Vernik is the brother of the artist, a famous journalist. – Ed.). I put together the first two sounds: “Ah!” – and it was already a rhyme … (Laughs.) But seriously, I wrote my first poems, quite youthful, when I fell in love for the first time, but probably only me can read them …

– What is more fun: writing lyrics, poetry or playing on stage?

– You now want me to say: let’s cut me in half or quarter? It’s all fun. I love my profession. Apparently, that’s why I don’t have time to live. Volodya Mashkov keeps telling me: “You are saying wrong: life is what we do!” And I answered him: “You and I are now sitting in this room in the theater, and outside the window people are walking, talking, seeing something.” He starts arguing with me, he disagrees. But I have this opinion, and I’m not ready to change it yet …