How to treat a runny nose without harming your health

Winter is in full swing, which means that the number of people with common colds (not to be confused with Covid!) is huge.

The most common form of a cold is a runny nose. Nose drops at this time of the year worries a lot of people. How to treat this disease so as not to harm health?

GLOP IN THE NOSE

In the pharmacy you can buy a lot of drugs for the treatment … more precisely, for self-treatment of this disease: almost all drops and sprays from the common cold are officially allowed to be sold without a prescription, which means that they can be used independently. Naturally, the instructions for them say that before treatment, you need to consult a doctor. But, in fact, this is for the sake of appearances – most people with a common cold do not rush to the clinic. A lot of our compatriots independently drip or spray medicines into their noses, relying on previous treatment experience. For most of them, drops and sprays really help to restore breathing through the nose. For the treatment of the common cold, these are really effective medicines … But, unfortunately, the fight against this simple ailment often ends in a fiasco – drops and sprays for the nose very often cause complications. Here are two typical scenarios that arise if you are treated incorrectly.

Option one – a gag in the nose. Against the background of treatment, a wet runny nose disappears, but nasal congestion, which makes breathing difficult, remains for a long time (and sometimes forever), turning into a chronic disease. Dependence on the drug develops: he dripped a new portion of the drug – the nose breathes, there is no drug – the nose is stuffed up even more than during a cold. Essentially, the nose becomes an addict. This dependence syndrome can develop just a few days after the misuse of drops and sprays.

Option two – dry syndrome. In this condition, atrophy of the nasal mucosa occurs. The official name of this disease sounds like this – “atrophic rhinitis”. Its typical symptoms are burning and dryness in the nose. Most often, atrophic rhinitis is a complication of a complication: in order to get rid of the addict’s nose, drops and sprays are used often and for a long time, and this almost inevitably leads to atrophy of the mucosa. But for many, this complication occurs with the usual treatment of the common cold.

What to do now: give up such drugs and be treated with the most popular remedy, that is, without drugs and blow your nose every minute? This is not the best way out of the situation, also fraught with complications. Blowing your nose a lot can lead to otitis media (ear inflammation). So it’s better to “uncork” the nose with medicines. But you need to do this in such a way that you can cure a runny nose and avoid complications. It is necessary to be treated not according to the instructions for the medicine, but according to the mind. For example, the leaflet to the drug often says: instill the medicine in each nasal passage 2-3 drops 4-5 times a day for several days. It is more correct to do otherwise, using the drug not regularly, but only if necessary: ​​if the nose is moderately blocked, do not drip anything into it and do not spray – breathe on your own. When this is not possible, use drops or spray. Thanks to such a ragged and irregular treatment, you will use the medicine not 4-5 times a day, but 2-3. This means that the load on the mucous membrane will be less, and the likelihood of developing atrophy and dependence will be significantly reduced.

BEST THE ENEMY OF THE GOOD

Another technique to reduce the likelihood of developing these complications is called “the best is the enemy of the good.” Do not try to use more modern drops and sprays that act for a long time – for 8-12 hours. These are good drugs, but often such a long action is excessive. After all, during the day the nose is usually blocked episodically – in the morning it doesn’t breathe, then it “uncorks”, then it doesn’t breathe again, etc. In such situations, it is better to use those medicines that last 3-4 hours. 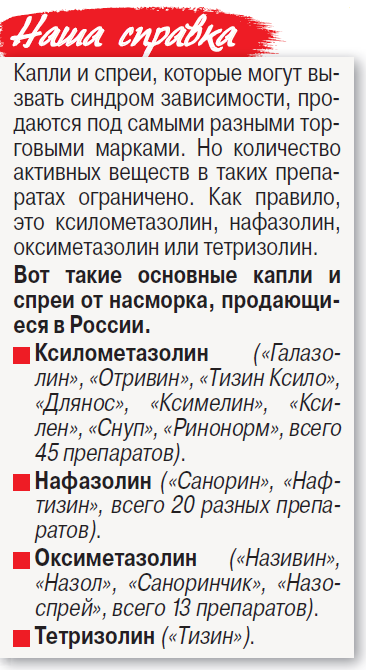 But at night it is more difficult for the nose to breathe – this is how our body works. And in order not to suffocate and not to be without sleep all night, you can apply drops and sprays of long action, which help within 8-12 hours. But in general, try to keep the contact with the medicine as short as possible. Remember the main safety rule: the more time your nose goes without medication, the less the risk of complications.

There are several other ways that will help you avoid complications, and at the same time you will also save on medicines by reducing their consumption.

Many people use drops and sprays to stop nasal drips even when breathing is quite free. This can not be done, because the main task of such drugs is to “uncork” a stuffy nose, and not stop the flow of fluid from it. For this, they are much less effective than a handkerchief.

If it is not the swelling of the nasal mucosa that interferes with breathing through the nose, but the accumulation of mucus in the nasal passages, the drops will not help either. In this situation, the folk remedy already known to you is much more useful – to blow your nose. But before doing this, it is better to soften the “blockages” with oil or slightly salted water (there are even such medicines with sea or just salt water). At worst, plain water will do. By the way, these water medicines can help in other cases. For example, when there was a break in the course of your runny nose – the first days of the illness passed, during which it is most difficult to breathe through your nose, you began to feel better. This is a very good time to use drops and sprays less often, replacing them with water preparations.

They will also help with atrophic rhinitis, as they soften and moisturize the nasal mucosa. In addition, in this condition, you can use the Euphorbium compositum homeopathic nasal spray, Kameton, Camphomen, Ingacamf oil-based inhalers, Pinosol drops and various nasal ointments (make sure that they do not there were active components contained in classic addictive drops and nasal sprays – see below. “Our reference”).