100 years ago, at the end of 1921, Canadian scientists isolated insulin in the laboratory. And already in January 1922, on the second attempt, they successfully injected him into a teenager with diabetes.

His name is Leonard Thompson, and it remains in history. And already in the fall of 1923, they received the Nobel Prize for this discovery.

Before the discovery of a method for producing insulin, diabetics died like flies. To live with this diagnosis for at least a few years, you had to starve yourself. This was the only treatment for type 1 diabetes. Just imagine, 14-year-old Leonard Thompson, who received insulin first, weighed less than 30 kg, because he was forced to eat very little – his diabetes was extremely difficult. The introduction of insulin helped him live another 13 years, and he died of pneumonia at 27.

But some of the early insulin patients were more fortunate. The record was set by Elizabeth Hughes, who died at the venerable age of 73 in 1981. She lived on insulin for 58 years. At the same time, Elizabeth got married, gave birth to three children, was a social activist and did not advertise her illness.

Oscar Minkowski was the first to prove the connection between diabetes mellitus and the pancreas. He was born in Russia but worked in Germany. The discovery happened in 1889 by accident. While removing the pancreas of the dogs, he noticed that flies flock to the urine of animals: they were attracted by its sweet taste. This indicated that the dogs were developing diabetes.

The next decisive step was taken a year later by Leonid Sobolev in St. Petersburg. He proved that the development of diabetes is associated not just with the gland, but only with the islets of Langerhans that are part of it – it is in them that insulin is formed. The rest of the gland produces digestive enzymes.

It seems that it was from this discovery that the Canadian Frederick Bunting, who was the first to isolate insulin, was repelled. True, he never once mentioned our scientist in his articles. But, most likely, he was familiar with his works: they were published in the leading scientific journal of that time – “Virchow’s Archive”. Even then, Sobolev suggested that an extract could be obtained from these islets to treat diabetes. But it looks like he was not as adventurous as the Canadian and did not start working on this drug.

Bunting looked like an adventurer. Being a simple surgeon and having no scientific experience, he decided that he knew how to isolate insulin, and convinced the famous biochemist J. McLeod of this. Moreover, his idea seemed to grow out of Sobolev’s research.

MacLeod allowed Bunting to work in his laboratory and even gave help from a student, Charles Best, who could do blood and urine sugar tests (then this was a rarity). They quickly obtained an extract that lowered sugar levels in dogs with a pancreas removed. 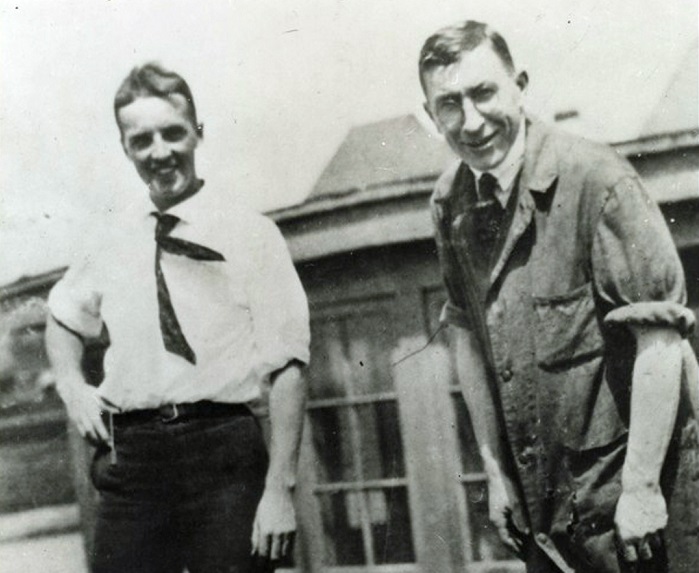 Bunting was able to quickly organize human trials, and in January 1922 (that is, after less than six months of research), they introduced the extract to the aforementioned L. Thompson. The first pancake turned out to be a lump – a strong allergy began at the injection site, because the drug was poorly cleaned. Biochemist James Collip, who was involved in the experiments by McLeod, helped to bring it to mind. It took him only 12 days to develop a cleaning method. Thompson’s second injection worked great.

THE MOST SCANDAL NOBEL

Then off we go. As a result, J. MacLeod, using his extensive connections, began to push for the Nobel Prize. And in 1923 it was presented, the laureates were McLeod himself and Bunting. This caused a big scandal, because the first did not take any part in the experiments and only sometimes connected his students to them. Harsh Bunting was categorically opposed. But in the end everything was decided by peace. The laurels remained with Bunting and MacLeod, and they shared the bonus money equally with Best and Collip.

But this award was scandalous for other reasons. Usually they try not to remember this, but once the chairman of the Nobel Committee on Medicine and Physiology, Rolf Laft, let slip that the 1923 prize was the worst mistake of all time. He was then still working as an endocrinologist at the Karolinska Institute and knew perfectly well both the ins and outs of the awards and the real history of the creation of insulin. In his opinion, Banting, who worked with him Best and also Nicolae Paulescu, should have become Nobel Prize winners. This Romanian scientist carried out work on the isolation of insulin in 1916. But due to the First World War, raging in Europe, he slowed down his work. Therefore, the Canadian team overtook him. It is important that Bunting knew about Paulescu’s works and even quoted them in his publications, but distorted the quotes somewhat so that they looked in his favor.

In addition to this trinity, experts recall several more scientists who also tried to isolate insulin and use it in an experiment. The German Georg Zvelzer received it back in 1906, and the Americans Ernst Scott and Israel Kleiner – in 1911 and 1919, respectively. It is said that their preparations were dirty. But in Bunting, too, the extract became pure only after the work of Collip, who was left without a prize. But history cannot be rewritten. Moreover, thanks to the frantic energy Banting broke through the discovery and industrial production of insulin, and this saved the lives of many.