“Homeless home” for the artist

For almost ten years, Pavel Suslov, a resident of Zhukovsky near Moscow, has been building summer houses from canvases, in which he himself lives until late autumn. And at the same time he paints the walls of his temporary abode.

Pavel, one might say, brought to life the popular maxim that the artist lives in his paintings. He really lives in them – the canvases in stretchers are segments of modular structures, which the creator calls “homeless houses”.

– I first develop a 3D model of the future house on a computer, then I assemble it, fastening the canvases with punched tape, – says the artist. – I live in it and paint at the same time. As soon as the blank canvases run out, I disassemble the construction and take the paintings home.

Usually Pavel chooses a location somewhere in the suburbs. This year Suslov decided to build a house on the territory of the Bykovo-Maryino estate.

“This facility is, in principle, closed, but the volunteers of the Vozrozhdenie Foundation agreed with the owner to let me on the island, give me a boat,” says Pavel.

There is enough space in the house for a single tent, where the artist lives. He has a bed and a gas stove. Pavel lives there with his cat Frodo, who feels great on the island and even learned to swim across the lake.

– “Heart” consists of dozens of canvases-segments, but I paint only five directly on it, – explains Pavel. – I take out the rest, sail with them to the mainland and write there already.

The other day the artist swam across the lake, left the boat in the bushes and wrote in the park all day. He returned and saw a terrible picture.

“My things were thrown away,” says Pavel. – But the most important thing is that canvases with finished works are pierced. Now I’m going to start restoring the paintings. I don’t hold any grudge against anyone … 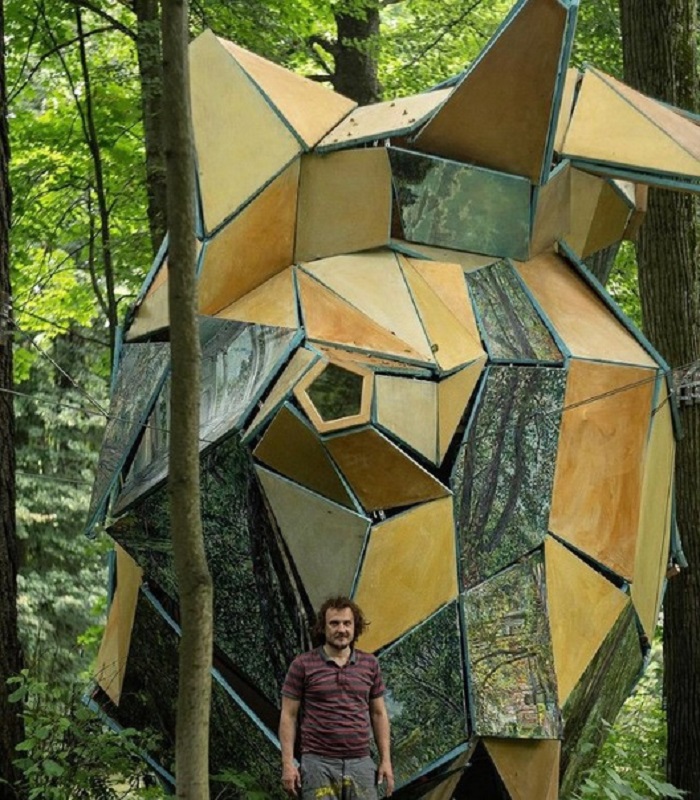 By the way, it was not in vain that Suslov called his project “homeless”. Such modular buildings from scrap materials are being erected by homeless people, there are many of them in the forests near Moscow. The name is accurate in form, but also in essence brings the viewer closer to the idea of ​​freedom of creativity, freedom of the artist from frames and conventions.

In winter, Suslov works at home, in his one-room apartment in Zhukovsky. As people who know him say, the room was divided by a partition into two parts – a bedroom and a workshop. Next year he plans to continue his series of “homeless houses” with a houseboat – “duck”, on which he is going to sail along the Moskva River from Zhukovsky to Kolomna.