Goldman: The only model that worked was hard quarantine. The Swedish model did not work. I don’t even want to write about Belarusian, there are no censorship words

A pandemic is the middle of the beginning.

From morning to evening, regardless of the situation, I am in the hospital. But in today's situation, I often communicate with doctors with the most advanced - the senior doctor of the infection department and the virologist, who are responsible for research on the current pandemic. These are those who take and treat patients with coronavirus every day.

I decided to share with you a short brief with my observations.

There is no unequivocal opinion - neither among doctors, nor among researchers. We faced this time.

Where did the virus come from, how is it transmitted, and most importantly, how will it behave in the future? Initially, it was assumed that the virus is transmitted by drip, settling on surfaces, then by airborne droplets, today there are works that talk about the possibility of transmission of the disease even through sexual contact. There is no clear distribution of who is most affected and what causes the consequences - it is asymptomatic in some, while in others, even young people, it causes serious damage. Moreover, not only the respiratory system, but also the whole organism. With a stretch, this can be compared with alcohol tolerance. One will drink a liter of whiskey and go home with his own feet, the other from two glasses will fall under the table. But if the presence or absence of alcohol tolerance is more or less studied, then there is no clear understanding with the virus, for a very simple reason. Little time and little data. In order to draw conclusions, it is necessary to accumulate and process more information. Perhaps it will take years until we finally figure out what COVID is , where it came from and how to deal with it . Even the tests do not give 60 - a percentage result - doctors tell us how to take a test from a patient who is on mechanical ventilation with all the symptoms " crowns. " One, two, three - only the sixth gave a positive result.

The protocols received clinical confirmation efficiency, no. All for the same reason - too little time has passed. The applied schemes have already changed, and several times. They are suitable for some patients, but not for others. Just recently, for example, they realized that anticoagulants should be used not with preventive doses, but with full therapeutic ones. The remedy for malaria raises many questions, and there is practically no benefit from antibiotics in the treatment of coronavirus, given the viral nature of the pathogen. Antibiotics are prescribed only for the treatment of bacterial complications.

In Israel, one of the lowest deaths from coronavirus in the world. Doctors do not explain this with the national or genetic characteristics or miracles of Israeli medicine. A team of doctors worked on each seriously ill patient in the country, and each seriously ill patient had a place in intensive care. Not a “bunk”, four legs and a mattress, but a place with oxygen, ventilation and other equipment systems connected. Those who were connected to the ventilator were left on it until the condition was completely stabilized. Much longer than patients were on mechanical ventilation in other countries. How is this possible? Yes, it’s very simple - the Israeli healthcare system was not overloaded. There were enough resources for everyone.

Lungs of patients were hospitalized only for medical reasons. This allowed us to always have free places for incoming emergency patients. And to have the most important resource in the fight against coronavirus is a sufficient number of medical staff. Those whose condition became "serious" were sent to hospitals, the rest were at home and their condition was under constant medical supervision. Two emergency rooms were organized in the hospital: "clean" for "traditional" patients, and "dirty" where everyone was sent with signs of SARS. As a result, even at the peak of Ikhilov, a third of the beds intended for patients with coronavirus were filled with strength. It was a reserve in case of a strong outbreak. So far it has been avoided.

There have been plenty of curses against the authorities. I do not consider myself a fan of the current Israeli administration, this is clearly seen from my posts on Facebook. But for the measures that they introduced, despite the strongest opposition and negativity on the part of citizens, I would have to thank them. Here you need to look at the general plan. For a second, put yourself in the place of the prime minister, who is shouted in one ear by the Minister of Economy that we will have a million unemployed and the whole business will go bankrupt, and in the other - the Minister of Health, who promises 100 thousand deceased and the collapse of medicine. And he must make a decision and take responsibility - either a bunch of corpses or a lot of unemployed.

But you can help the unemployed, there are benefits, payments, and the like - you can’t help the dead anymore. The economy will recover, slowly, maybe not right away. But you cannot revive the dead. They argue a lot about "models." So, the only model that worked was hard quarantine, masks, distance, a total ban on movement. The Swedish model, alas, did not work - they have more deaths than recovered. I don’t even want to write about the Belarusian model, there are no censorship words. Those who are late - Russia, the USA - are just passing the peak now. There is only one fact to remember about “this is ordinary flu” - in Italy for the first time since World War II, the doctor had a terrible choice: you have five patients, all are in serious condition, and there is only one ventilator. So choose who to intubate - the others are more likely to die.

Nothing yet is over. Maybe there will be a second wave, maybe we’ll be lucky and slip through. Doctors say that danger remains until mass immunity is developed or a vaccine is invented. But mass immunity is at least % who have been ill. Imagine that if you take 5% of this amount of heavy, no health system can digest them. This is not counting the death rate from ordinary heart attacks, strokes, etc., which will immediately jump by an order due to the lack of help and the fear of people going to hospitals. Such cases were also. In the same "Ichilov" they brought a man with a severe heart attack, somehow dragged from the other world. It turned out that I had been walking with chest pains for a week, but I did not want to go to the emergency room. Therefore, quarantine, distance, masks and closed borders are needed. My friends, we are faced with what we have not encountered 100 for years. On a planetary scale, we are still at the epicenter of a hurricane. As the doctor with whom I spoke rightly remarked, this is the middle of the beginning. 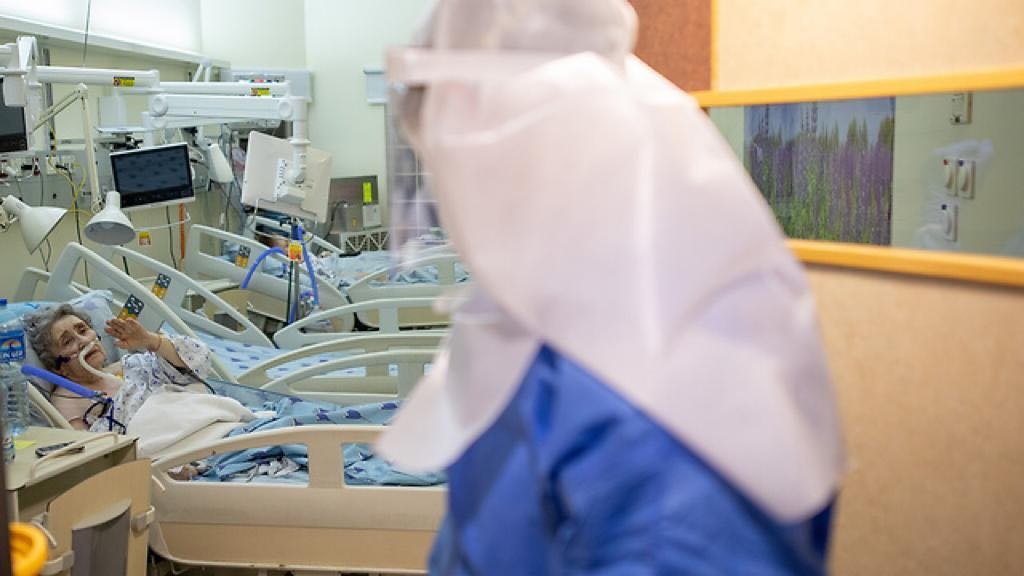 Photo from the personal archive of Roman Goldman

And yet, our hospital is the only one a medical center in the world that allows relatives to say goodbye to their loved ones, who are in serious condition with a threat to life. Of course, in compliance with all biological protection rules approved by the Israeli Ministry of Health.

Samir Agav came to the hospital to visit his beloved grandmother Eugenia, who became ill with a coronavirus. Realizing this is the last time. A few days later she passed away - and the documented meeting became a farewell memory.

His last words were: “Just think about yourself. Everything will be fine, grandmother.”