Once in the Museum of the History of the Moscow Region Lobnya, I saw on the stands a lot of photographs of front-line soldiers – both those who died on the battlefield and those who returned home. But I was especially interested in the photograph of a young girl in a soldier’s greatcoat and a hat with a five-pointed star.

“This is Anastasia Babochkina, a resident of Krasnaya Polyana,” said the director of the museum, Lyudmila Lukina, who was accompanying me. “You see, next to her portrait there is a rare military award – the sign“ Excellent cook ”. And the accordion that stands under the portrait also has something to do with it …

Anastasia Babochkina, private of the front-line service of the PFS – food and fodder supply of the Red Army. Throughout the war, she regaled the airfield-based pilots with the favorite food of the military: borscht or cabbage soup, kulesh or buckwheat with meat, stewed potatoes. For this she received an award. 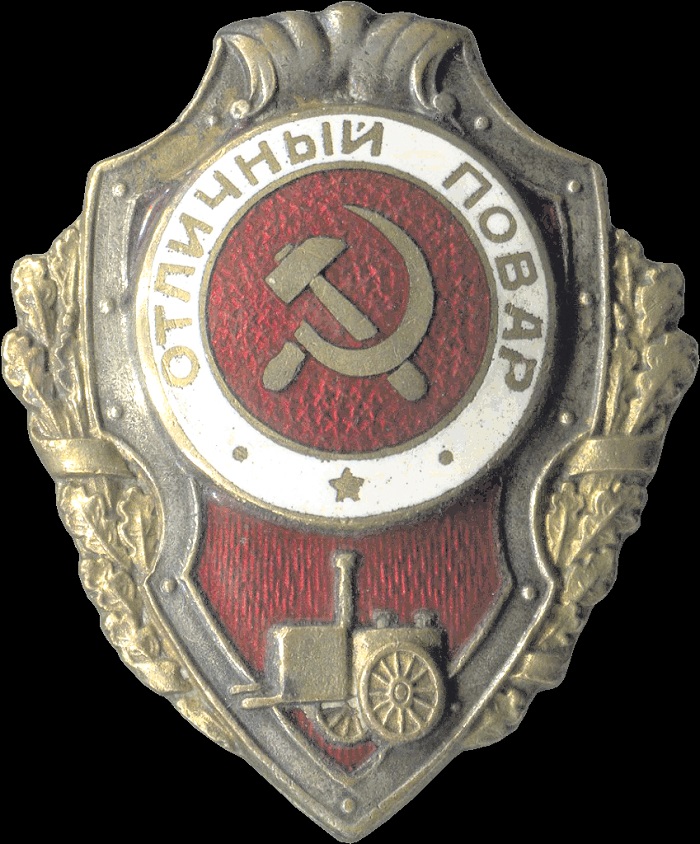 And her father, Yakov Babochkin, was directly related to the accordion.

Their wooden house No. 15 still stands in Krasnaya Polyana. Then the owner himself, his faithful companion Natalya Georgievna and six daughters lived here, little less. Having exchanged his sixth decade in the distant 41st, Yakov knew that he was not subject to conscription, and a summons from the military registration and enlistment office would not be brought to the house. And the German was approaching Moscow. And then Yakov came to the regional executive committee: “Will you take the partisans? My great-grandfather, by the way, with a pitchfork in his hands went to the French adversary in 1812 near Vereya. I can easily handle the “Mosinka”. And then, I am a tailor, I can sew military uniforms. “

They took Yakov: two partisan detachments were just forming. And in October 1941, Babochkin was in the village of Vinogradovo, next to Dolgie Prudy on Dmitrovskoe highway. In the former manor’s estate, he was given a room for a workshop, and other tailors were selected to help. Winter was expected to be frosty, the commander of the detachment gave the task of sewing wadded trousers, sheepskin coats, fur mittens, and hemming boots.

At that time, one of the daughters, Nastya, worked as a pioneer leader in her native school. But the genes of the ancestors – the Mozhaisk partisans of 1812 – awakened in the 19-year-old beautiful girl a passionate desire to “exterminate the villains.” And when her father came from Vinogradov to pick up wooden mannequins from the house, from which he took measurements for sheepskin coats, she asked to take her to the partisans. He took it. And at the same time, Yakov Andreevich took with him one of the two accordions he had. How needed she was on the cold days of 1941! Under the sounds of this accordion, the partisans gathered in the evenings and sang patriotic songs.

The Germans broke into Krasnaya Polyana on November 30 of the terrible 41st. And on the night of December 7-8, our troops liberated the village. The snow-covered Beam Field, which began right under the window of the Butchkin house and became a bloody battlefield, was red. The Butchkins, together with all the inhabitants of the village, took the bodies of the fallen on drags and sledges to mass graves. The hearts of Natalya Georgievna, Yakov Andreevich, their daughters sank …

The partisans returning to Krasnaya Polyana were ordered to keep their powder dry. And for the boldness of the tailor Babochkin, who dressed the soldiers of the detachment in wadded trousers, sheepskin coats and hemmed boots, the authorities allocated a house for a workshop. Yakov Andreevich recruited ready-made masters from his fellow countrymen, as well as students. And the “factory” started working, fulfilling orders for the front. The hereditary partisan-patriot rejoiced that he served the Fatherland in his deeds.

Nastena was the favorite of her parents. Like none of the daughters, she adopted the mother’s ability to cook, embroider, and from her father – to sew. Returning home from Dolgiye Prudy, Yakov Andreevich wanted to put Nastya at a sewing machine in his workshop. And she suddenly declared: “There is a military unit in Dolgoprudny, signalmen are needed there. I want to go to fight as a volunteer. ” A day later, they arranged to see their daughter off to the Red Army …

HOW WESTENA BECAME A MILITARY COOK

At the beginning of 1942, the newly minted signalman Babochkin was sent to an aviation unit located not far from Dolgoprudny.

For three and a half years of the war, Anastasia Babochkina was the permanent queen of the airfield-based military field kitchen. I fed the pilots with borscht and kulesh. For these labors she was awarded the military badge “Excellent cook”, which was established by the Decree of the Presidium of the Supreme Soviet of the USSR on July 8, 1943. This sign marked the military labor of 33 thousand cooks of the Great Patriotic War. The front-line soldiers half-jokingly, half-seriously said: “There is no God of war, not artillery, but a field kitchen!” 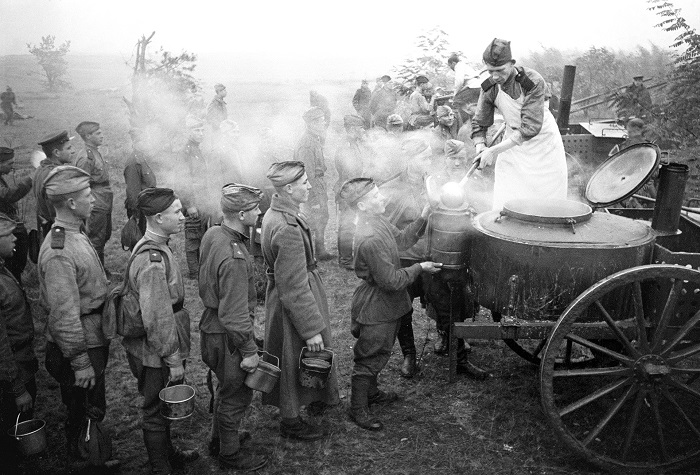 And on May 9, 1945, on Victory Day, near Konigsberg, an excellent chef pampered the brave eagles with pies, fortunately, a field kitchen with a KP 41KP-42 trailer had, in addition to a boiler, two ovens with baking sheets. The asses of the skies sang, danced, alternately circled the charming Nastya like a small child, lavishing compliments as always: “Our nurse, dear! Thank you for always adhering to the unwritten requirement: war is war, and lunch is on schedule! “

For all the winners, this day was a holiday, joy with tears in their eyes. But for Anastasia it was also bitter, wormwood … In the war, in this earthly hell, her first love was born. His name is Valery, in the detachment the guy was called Chkalov. He was shy, he would accept a bowl of cabbage soup, and hold the cook’s hand for a minute, say: “Since the Krasnaya Polyana, we will live, as the war is reconciled, there. Parents, find out, are you against the primak? ” Already on German soil, he took off from the airfield with his combat unit and did not return from air combat. Flew away, as it turned out, forever …

And together with him, the female happiness of Anastasia Babochkina, as it turned out, also melted forever in the blue spring sky. Her maiden name remained with her for her entire long, almost 90-year-old life … Although, the old-timers told me, she was beautiful, kind, economic. And “prominent, representative men” wooed her. All were refused: “I have one heart.” It remained loyal to Valery.

Nastena returned to her father’s house with Victory. Neighbors and relatives immediately met. The table was laid. And the long-awaited hour came when Yakov Andreevich took out of the closet for a long three and a half years the silent limp, carefully, slowly tested her voice, out of old habit, threw his fingers down the keys-buttons, and the vociferous sang …

First, Anastasia Yakovlevna went to work at a cotton-spinning factory, and soon she was called as a pastry chef at the enterprise’s dispensary. For 33 years she has done well her fellow countrymen with food – there is nothing tastier. And in peacetime she kept the mark of “Excellent cook” of the Great Patriotic War. And on the last journey Krasnaya Polyana saw off her modest daughter nine years ago. With her consent, at the end of the last century, the grandson brought his grandfather’s accordion to the Lobnya History Museum. 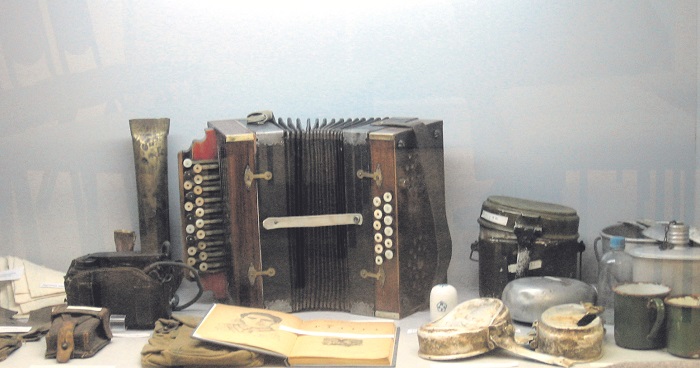 Not only as a witness to what was and did not grow into reality, but also as a participant in historical events – the Babochkin family and our entire Fatherland. A partisan with a voice ringing like a nightingale is now on the stand, under the glass.

Photo by the author and the Lobnya History Museum