Give us a Russian microchip!

Will we be able, relying on our own strength, to produce the most important electronic components for the civilian and military economy?

The intrigues of the United States and their partners in the anti-Russian bloc do not stop. In addition to the gas and oil industries, former partners are trying to strangle the most important industry on which the country’s defense capability and future depends – microelectronics. Sanctions prevent China and Taiwan from sending us microchips in the same volume and quality. But without these microscopic details, tanks, planes and missiles are just iron …

Recently, the Russian media vied with each other to discuss a fried topic – it turned out that over the past six months the share of defective microchips that are supplied to Russia has sharply increased. Jumped from 2 to 40%, 20 times. Disaster on the march? Let’s figure it out. 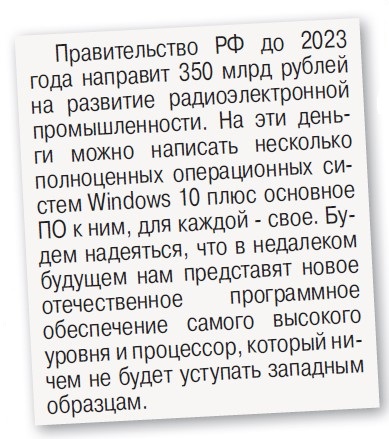 Of course, the root cause of this situation is the fact that official distributors refuse to cooperate with Russian companies. They are afraid of sanctions, and you can understand them. But in the same way, one can understand Russian companies that desperately need these same chips – no matter what, even through unofficial channels, even through five chains of intermediaries.

Blame gray suppliers for “substandard”? You can’t sue them. They know that Russian companies have no experience in testing chips, so sending them substandard parts, fusing stale and illiquid goods is easy and not dangerous. And the money is here! Find other gray suppliers? But will they be better than what we have now?

WILL THE CONSEQUENCES BE SEVERE?

You don’t have to be an expert to understand: the electronics market in the Russian Federation will be saved only by the development of its own production. Why didn’t they start creating it earlier, although this is a very strategic thing?

As usual, we hoped at random that everything would always be peaceful and blissful, and that we would receive computers, smartphones and other electronic stuffing of modern life from abroad in exchange for oil and gas. And officials – kickbacks for contracts with foreign suppliers.

So we need to get microchips today by all means, even from China, even from Japan or Korea. Even with a huge percentage of marriage, but where to go? We will not run back to the Middle Ages to life without cars, computers and smartphones. Or will it still have to?

“The microchip production plant will not work without modern equipment. We seem to have it, but it is small and only a few companies produce such equipment. And they are either under sanctions, or they are indirectly controlled by the EU or the United States, at best, the countries of the South-East, – says Igor Kovalenko, an expert on the electronic components market. – We had the opportunity to buy such factories in finished form and train the appropriate personnel. But they didn’t do it in time…” 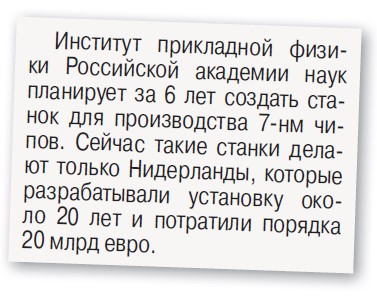 In response to such pessimists, optimists hopefully nod at domestic firms like Baikal Electronics with the Baikal-S server processor project. They are waiting to overcome the refusal of the Taiwanese company TSMC to enter into new contracts, and then …

It is known that until recently Russia produced its own Elbrus and Elvis chips. But, alas, they were their own, only in name, because in reality they were made at the same TSMC factories in Taiwan – in general, more than half of the world’s chips are produced there.

And back in the spring of 2022, experts started talking about transferring Taiwanese production to the Zelenograd Mikron factory. This will require the support of the Russian government and several billion rubles. Will it work? Will there be personnel for the local production of chips, and most importantly, the necessary modern technologies? If we don’t want to lose, we must find it.