Furgal, infected with COVID-19, was hospitalized in the SIZO hospital "Sailor silence" 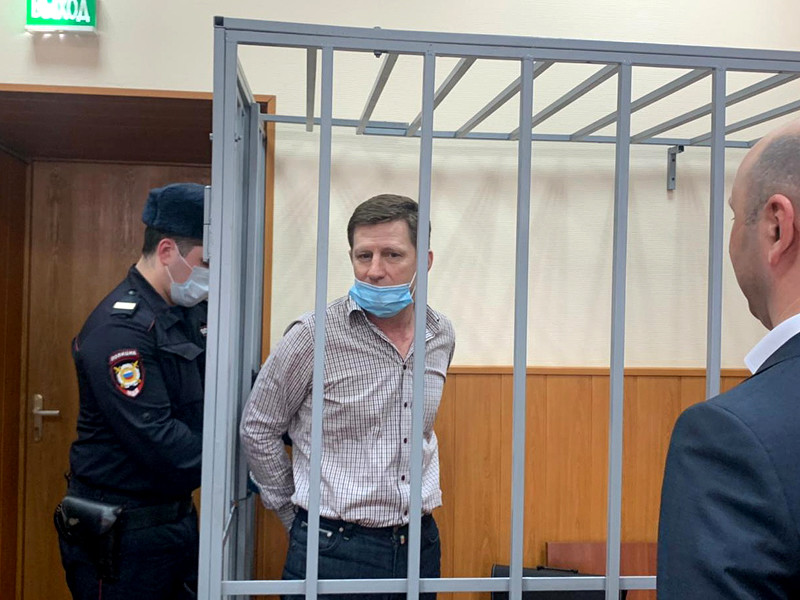 The ex-governor of the Khabarovsk Territory, Sergei Furgal, who was arrested on charges of murder and attempted murder, who was ill with coronavirus, was hospitalized in the Matrosskaya Tishina detention center. It is in satisfactory condition, Eva Merkacheva, a member of the Moscow Public Monitoring Commission, told RIA Novosti.

Earlier, Furgal’s lawyer Boris Kozhemyakin said that the ex-governor was diagnosed with a coronavirus and had a temperature of 38 degrees.

Earlier, Furgal himself told his lawyers that he would have lung problems in the event of COVID-19. In the past, Furgal had a serious lung disease and underwent surgery. In addition, the elder brother of the ex-governor died of COVID-19.

According to Eva Merkacheva, Sergei Furgal was taken to a CT scan. “He asked to be vaccinated, but, unfortunately, apparently, the vaccine never reached Lefortovo,” added the POC member.

If Furgal’s condition worsens, he “may be transferred to a civil hospital,” said Eva Merkacheva. Her opinion is quoted by RBC.

Earlier, one lawyer of Furgal, Sergei Groza, was urgently hospitalized with coronavirus pneumonia. According to Kommersant, recently he daily studied the materials of his client’s criminal case, while being in the same office of the Lefortovo pre-trial detention center with Furgal himself, his other six lawyers and representatives of the ICR investigation team. At the same time, at least half of the participants in the familiarization were not vaccinated against coronavirus.

In early February, the Investigative Committee of the Russian Federation brought charges in its final version to the former governor of the Khabarovsk Territory, Sergei Furgal. According to the investigation, he is the organizer of a criminal group that attempted the murder of Alexander Smolsky and the murder of Yevgeny Zori and Oleg Bulatov in 2004-2005.

“The involvement of the accused in committing these crimes was established as part of the work on the investigation of crimes of past years, which remained unsolved for a long time. members of an organized criminal group to the above crimes, as well as their motives, “the ministry said in a statement.

The murder decisions were reportedly linked to advancing the commercial interests of Furgal and his accomplices. So, in order to expand the business, Furgal and his partner Nikolai Mistryukov opened new points for receiving scrap metal in the Amur Region, where Smolsky was engaged in similar business activities. He accepted the goods at a higher price, creating competition for Furgal.

Wanting to oust Smolsky from the market, Furgal and Mistryukov demanded price changes from him and repeatedly provoked conflicts, and subsequently decided to eliminate the competitor. Two grenades were thrown into the garage where the victim was, one of which exploded near his gate. The second grenade hit inside, but did not explode, and Smolsky survived, after which he reduced the purchase prices for the metal. The perpetrator of this crime was a certain Marat Kadyrov, who was detained and arrested on charges of committing an especially grave crime.

In addition, Furgal and Mistryukov also organized the elimination of Yevgeny Zory on the basis of a long conflict over the reinforced concrete plant acquired by Zorey. “At the direction of Furgal and Mistryukov, the entrepreneur was killed by the members of an organized criminal group,” the accusation says, the authors of which specify that this happened the day before the court decision was made on the disputed property. The perpetrator of this crime was a member of an organized group, Andrei Paley, who is also in custody and accused of committing crimes under paragraphs. “a”, “g”, “h” part 2 of Art. 105 of the Criminal Code of the Russian Federation (murder of two or more persons committed by an organized group). To put the investigation on the wrong track, Paley imitated a sudden conflict with Zorey, during which he shot the victim.

The prosecution also notes that after the murder of Yevgeny Zori, Furgal and his business partners were detained as suspects, but the criminal prosecution against them was terminated due to insufficient evidence. At the same time, the former police officer Oleg Bulatov suspected his companions of organizing this murder and was subsequently also shot by Paley.

“The involvement of Furgal and other members of an organized criminal group in murders and attempted murder is confirmed by numerous testimonies of victims, witnesses and the accused themselves, the conclusions of forensic examinations, as well as other evidence in their entirety,” the UK concludes. Furgal himself had previously stated that his criminal case was “political” and that the investigators were putting pressure on him. “The senior investigator made me understand that if I do not admit my guilt, my ex-wife and eldest daughter will be prosecuted,” Furgal said.

“My criminal case is completely ordered, it can be seen from the case materials. I did not commit any crimes, all the versions, the circumstances of which the investigation exposes, have nothing to do with me, and this can also be seen from the materials of the criminal case. I can say with complete responsibility that no not only irrefutable evidence, there is no evidence at all, “Furgal said.

Speaking about the testimony of Furgal’s former business partner Nikolai Mistryukov and ex-policeman Vladimir Pershin, the ex-governor said that Pershin was serving a sentence in a colony for extortion and blackmail, and also extorted money from Mistryukov. In turn, Mistryukov was allegedly deprived of his lawyers, and after carrying out “certain” actions, he agreed to accept the version of the investigation.

At the moment, the ex-governor is getting acquainted with the case, after which it will be submitted to the court for consideration on the merits. Furgal’s defense insists on a trial in one of the Khabarovsk courts with the participation of a jury.

Since July 2020, protests have been regularly held in Khabarovsk, the participants of which have sought the release of Sergei Furgal. The largest such action was attended by 80 thousand people. By February 2021, the mass protest movement in Khabarovsk had died out.