French bulldog got to the bottle of shampoo and turned purple

The owners of a French bulldog named Luigi were horrified when they saw what hooliganism the pet had done. 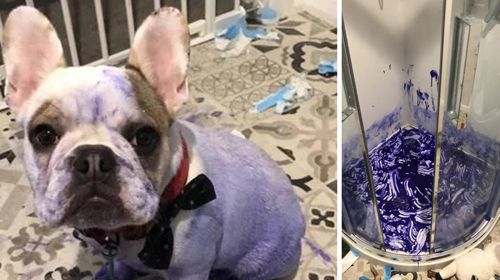 The dog got into the shower and got to the purple tinted shampoo. Not only did it take a lot of cleaning after playing with the cosmetic product, but the fur of the animal turned into a rather unnatural color. For a while, purple Luigi became a social media star. Although its owners at first did not care if the dog became famous. In fear, they rushed to call the veterinarian, but the doctor not only laughed at the incident, but also assured that Luigi was safe. But the purple color lasted for several months, surprising the people.

Protecting her dogs, the girl threw the bear off the fence