In fact, the Russian government has acknowledged the collapse of the “import substitution” policy, at least in the production of basic goods to fight the pandemic – gloves, hygiene products and even a stretcher.

How else to explain the fact that the EAEU extended until the end of March the duty-free import of most types of these products and raw materials from which they are made.

WILL THE ABROAD HELP US?

To be absolutely precise, the Council of the Eurasian Economic Commission (EEC) decided to exempt from import duties for another six months the import of “certain components and materials for the production of medicines and disinfectants, medicines, respirators, goggles, rubber gloves, medical devices and equipment, as well as boxes and stretchers for transporting patients. “

The first term of such benefits for almost the entire anti-epidemic range, recall, was designated by the EEC from April to the end of September. But it looks like it is not close to proper import substitution here today. For, as the EEC Minister for Trade Andrei Slepnev said, “for a significant part of the list, we are extending the regime so that all the necessary supplies of protective equipment, medical equipment and materials are fully implemented, and we can effectively deal with the risks of a pandemic.” That is, therefore, we ourselves are not yet coping …

Very curious details of this decision are revealed in the interpretation of our partners and allies. For example, the AZATTYK agency (Kazakhstan), with reference to the press service of the Ministry of Trade and Integration of the Republic, clarified the information of the EEC on the real range of duty-free import of such products: masks, disinfectants, gloves and the like), as well as various equipment for the treatment and prevention of coronavirus infection. “

Isn’t it curious: here we are already talking about vaccines, although our statesmen from the highest tribunes have recently been increasingly talking about the successful development of Russian specialized vaccines. As well as the fact that they are about to be launched into mass production for the needs of healthcare in Russia and other EAEU countries. So are there vaccines or not? Such decisions drive the population into anxious and not too optimistic thoughts.

Anyway. The vaccine is, of course, very serious, you can, in the end, and be insured. But can’t we really cope with the production of basic medical products: boxes, stretchers, rubber gloves, safety glasses? 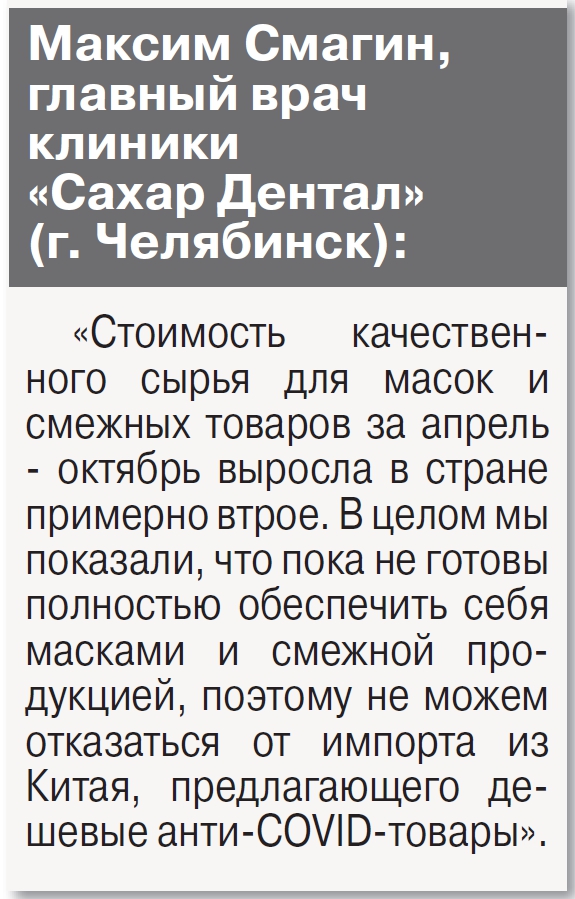 There is a serious suspicion that the insufficient level of provision with this generally very simple product stems, among other things, due to the fact that there seems to be no proper regulation – state and interstate – of the production and supply of these goods, as well as their prices. For example, here are the comments on the situation in the Leningrad Region by Alexander Pleteshkov, head of the local OFAS Russia: “During the first wave, there was a shortage of personal protective equipment, prices for them changed, this product became very much in demand”. The commentary to this situation, which was given by the main Leningrad fighter against monopolies, is also curious: “PPE stocks were sold for some time in some parts of the Leningrad region at reasonable prices. While in St. Petersburg they were gone for a long time. Changes in prices are the law of the market, they were influenced by the shortage and the changed cost of materials for their manufacture. “

MASKS WILL RISE IN PRICE?

In general, we must admit: there is still no effective state regulation of prices in such a significant area for the population. And not foreseen? An indirect answer to this question was recently given by one of the St. Petersburg officials: “Prices for certain items during this period do indeed rise, but, as the practice of the region shows, the increase occurs within the permissible norm. If we do not provoke suppliers, create a panic, then the second wave will pass calmly ”.

As they say, the tradition is fresh. Moreover, the scope of the second wave is much wider. According to the St. Petersburg Committee for Industrial Policy and Trade, if on October 12 the lowest price for a protective mask was 11.9 rubles, then by the beginning of November the price had risen to almost 21 rubles. And over the same relatively short period, stocks of protective masks in retail chains of St. Petersburg decreased by 12.6%, while the volume of stocks of medical gloves in pharmacies decreased by 13%. However, as reported by “Delovoy Peterburg”, the responsible employees of the regional government “were unable to quickly assess the reasons for such a reduction in stocks and price increases, as well as to forecast the further development of the situation.”

Objective fact: to date, the same tendencies have manifested themselves, according to available data, in another 50 subjects of the Federation. It turns out that the growing – by necessity, note – demand for a wide range of medical products is a very specific provoking signal to domestic suppliers, which will inevitably raise their prices. And why not – after all, there is no proper government influence on producers in terms of volumes, delivery times of these products and prices for them. And if so, it is not at all surprising that it is necessary to extend the terms of duty-free import of the same products and raw materials for their production.

One way or another, among the countries – exporters of the aforementioned assortment to the Russian Federation and other EAEU countries – about 30 states, mainly far abroad. The only consolation is that problems with foreign suppliers are unlikely to arise …