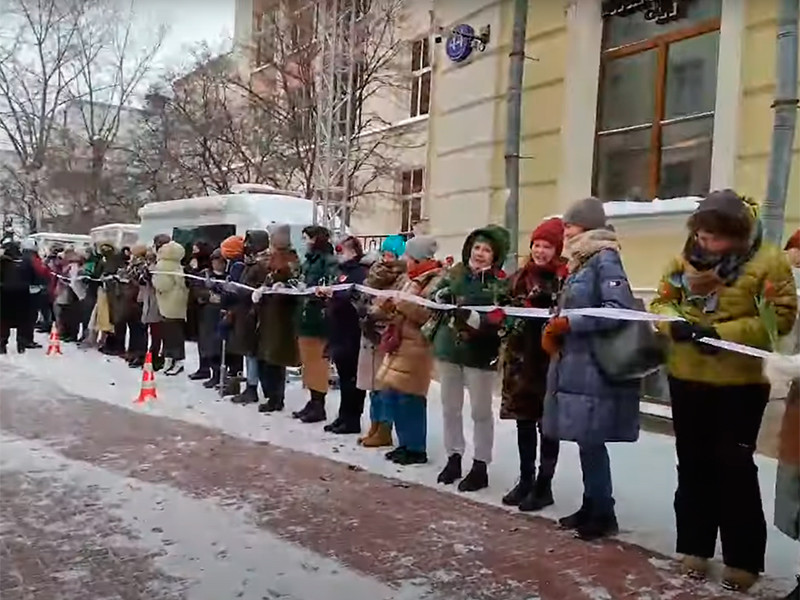 Members of the radical misogynistic community “Men’s State” send threats and insults to the participants of the women’s action in support of Yulia Navalnaya and political prisoners “Chain of Solidarity and Love” on 14 February. According to Mediazona, the artist and feminist Daria Serenko, who announced the action, has already received hundreds of threatening messages, and her address and photos are published on Telegram near her relatives’ house.

Serenko did not take part in the action itself, but was one of its initiators and created the event page on Facebook. “On Valentine’s Day, we want to express our support not only for Yulia Navalnaya, whose family has been persecuted by the state for opposition activities for many years, but also for all women political prisoners,” the announcement said.

Since then, Serenko has received hundreds of threats from supporters of the founder of the Male State movement, Vladislav Pozdnyakov, who was sentenced to a two-year suspended sentence in 2018 for inciting hatred. Later, the sentence was canceled, and Pozdnyakov himself left Russia, but regularly becomes the organizer of the persecution of women.

On the eve of the rally on February 14, Pozdnyakov and his supporters published the personal data of the participants and participants of SotsFem Alternative, urged them to come to Stary Arbat in order to “shout down the activists, tear out posters, shoot close-ups on camera” and call them names on video.

After the action, numerous threats appeared on the pages of Darya Serenko on social networks. “These were threats like: we find out your address, we will come for you, look around, we will put you on a bottle, we will rape you, we know where your husband lives, we will kill your animals,” she clarified, stating that one of the commentators was Roman Litasov, a trainer at Flex Gym fitness club in Omsk.

Serenko demanded that the club make a public statement on this matter, or apply a penalty to the coach, suggesting that he could “drain” the data of the girls he trains. Litasov himself told the Mediazona correspondent that he was ready to talk only “for a certain fee.” And the Flex Gym network account closed comments on its Instagram.

According to Serenko, in total she received about 600 messages with threats and insults. And in Pozdnyakov’s Telegram channel, photographs appeared in which she approaches the house of relatives. The address is also on the photo. Pozdnyakov wrote that his “comrades” followed the activist.

Serenko suggests that the pictures were taken by the taxi driver who drove her home. The photo was clearly taken from the interior of a car, while the activist did not notice other cars in that place. She is going to contact the police due to the fact that a photo with the address of her relatives’ house was published on the Telegram channel, the author of which constantly threatens women and calls for reprisals against them. At the same time, Telegram ignores numerous complaints about the channels of Pozdnyakov and his followers.

“Do I understand correctly that Pavel Durov personally supports the violence against us? A threat to our life and health?” – wrote the activist on Facebook. According to her, no reaction from the company has yet followed, and threats and insults continue to come to her and other feminists.