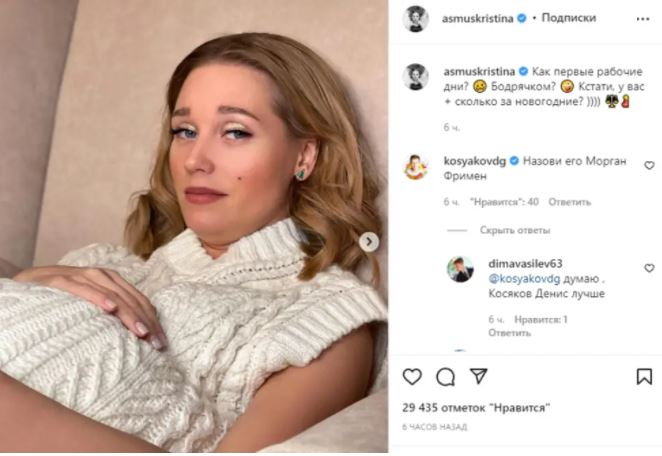 Actress Kristina Asmus shared with her fans a typical “post-New Year grief”. The star of the film “Text” has slightly gained weight after a long holiday.

The ex-wife of the comedian decided to present this news in a comic form. She posted a picture showing her rounded face with pronounced cheeks and a hint of a double chin. Asmus made an accent on her figure, which she either specially “inflated” or put a false belly under a baggy sweater. It turned out quite convincingly – some even decided that the actress was pregnant again.

“How are the first working days? Vigorous? By the way, do you have + how much for New Year’s? Asmus asked the fans.

Self-irony Asmus liked her subscribers. They shared that during the New Year holidays they also gained a few extra pounds and are now trying to get rid of them in a panic. Some decided to joke back and began to come up with a name for the “future child” of the star.

“You are not the only one… Everyone here is like that,” the commentator complained.

“Yes, yes … Tomorrow on a hunger strike,” another user added.