There are many unusual dresses created in the fashion world. New creations by talented designers appear every year. Moreover, for their creation, not only fabrics are used, but also various other materials.

A similar dress, distinguished by a strict style, could be seen on the pop singer Rihanna. On the black fabric was a pattern of luminous dots.

Another evening toilet was created especially for the popular singer Katy Perry. The girl went to a secular reception in it and shone there, attracting the glances of numerous guests. It was sewn in only one copy. 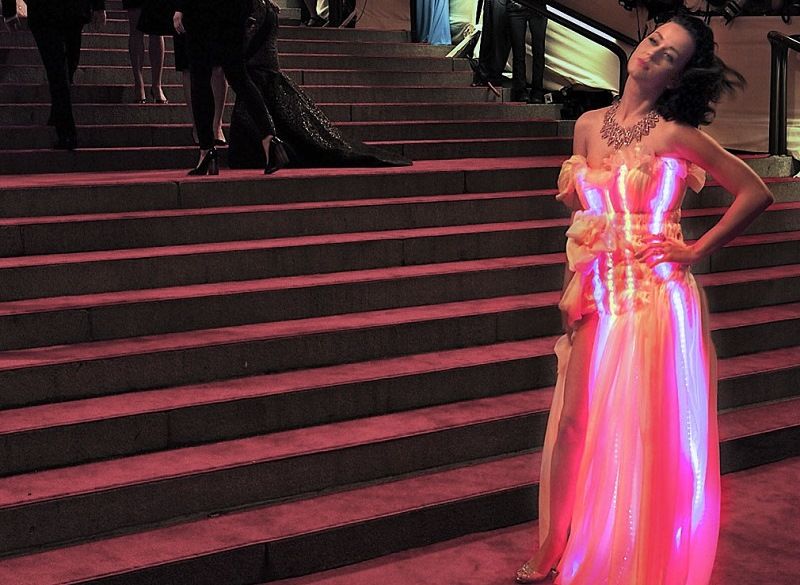 From the phone book

An interesting idea in a creative impulse was invented and implemented by the artist Jolene Paon. The flirty piece was made entirely from telephone directory paper. Moreover, the girl cut, pleated and glued everything by hand. According to Jolene, it turned out to be an excellent material for designing clothes. 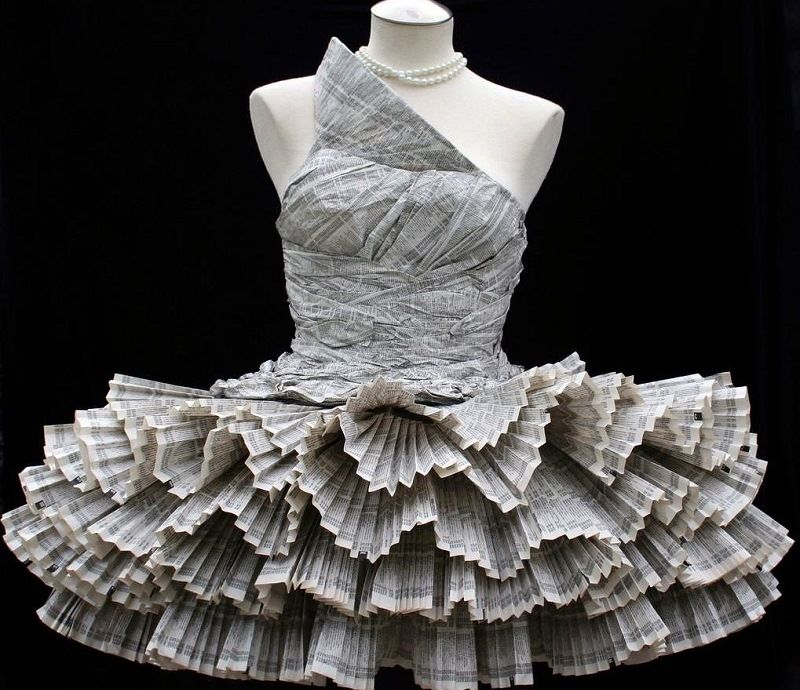 An artist from Britain created an unusual wedding dress from almost one and a half thousand pairs of rubber gloves. received a beautiful name – “Union of fragility”. Today it is housed as an exhibit at the Museum of Art in New York. 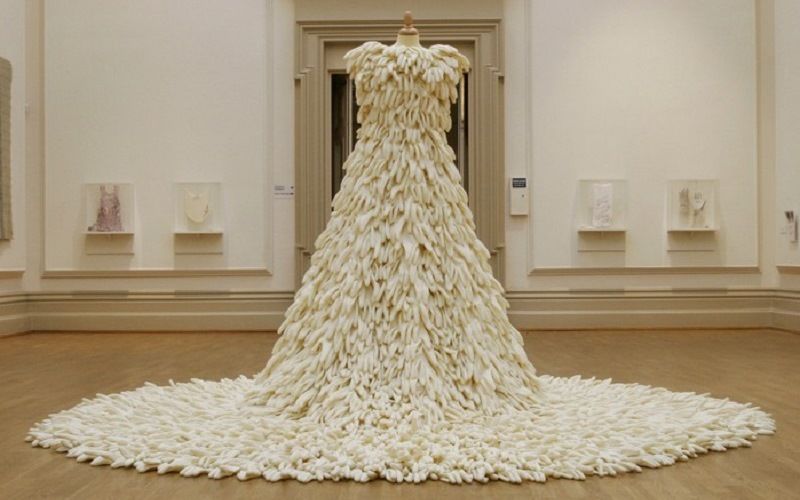 Unusual clothes that change their color have already begun to show the world bold and creative designers.

British brand Rainbow Winters has developed a high-tech fabric that changes color when exposed to raindrops. In addition, the material also reacts to the acidity of precipitation. It was originally planned that this fact will attract the attention of people and make people think about the bad environmental situation on our planet. 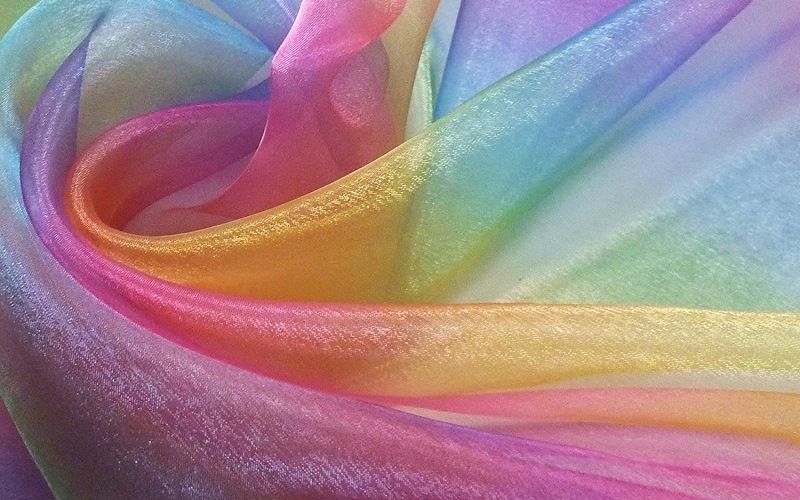 Philips also came up with an original model that changes colors (blue, red, green). The dress is equipped with sensors that detect body temperature, increased sweating and other parameters.

Of grass and branches

The wedding toilet is created using natural, ecological materials. The corset is made of high-density grass weaving, and the skirt is made of grass, vines and dry twigs. 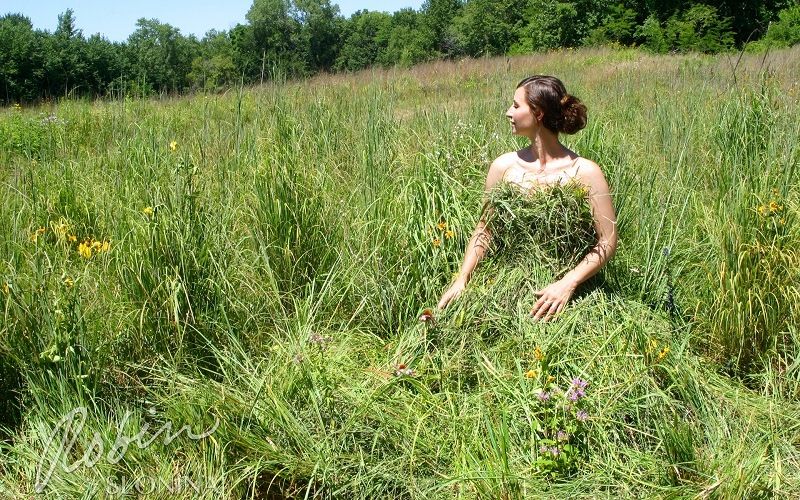 The pink creation is made entirely of scrap aluminum cans. It shimmers as if adorned with precious stones, but in reality it is just an illusion. The technique is officially patented by the artist Nikos Floros, who was the first to come up with this technology. The man cut the cans into thin strips, later weaving them into linen. 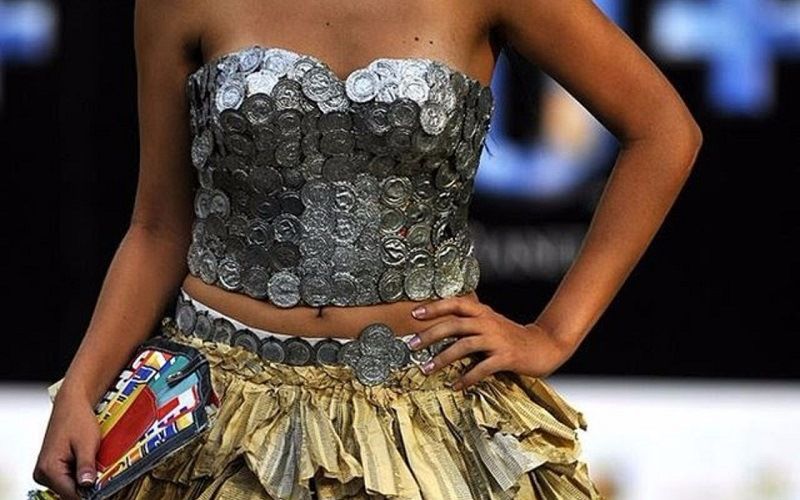 Costume designer Lizzie Gardiner created an original dress for The Adventures of Priscilla, Queen of the Desert, made from over two hundred American Express Gold credit cards.

Subsequently, Lizzie won an Oscar for her work on the film. The artist bailed out 12 thousand dollars for the outfit at the auction and donated them to charity. 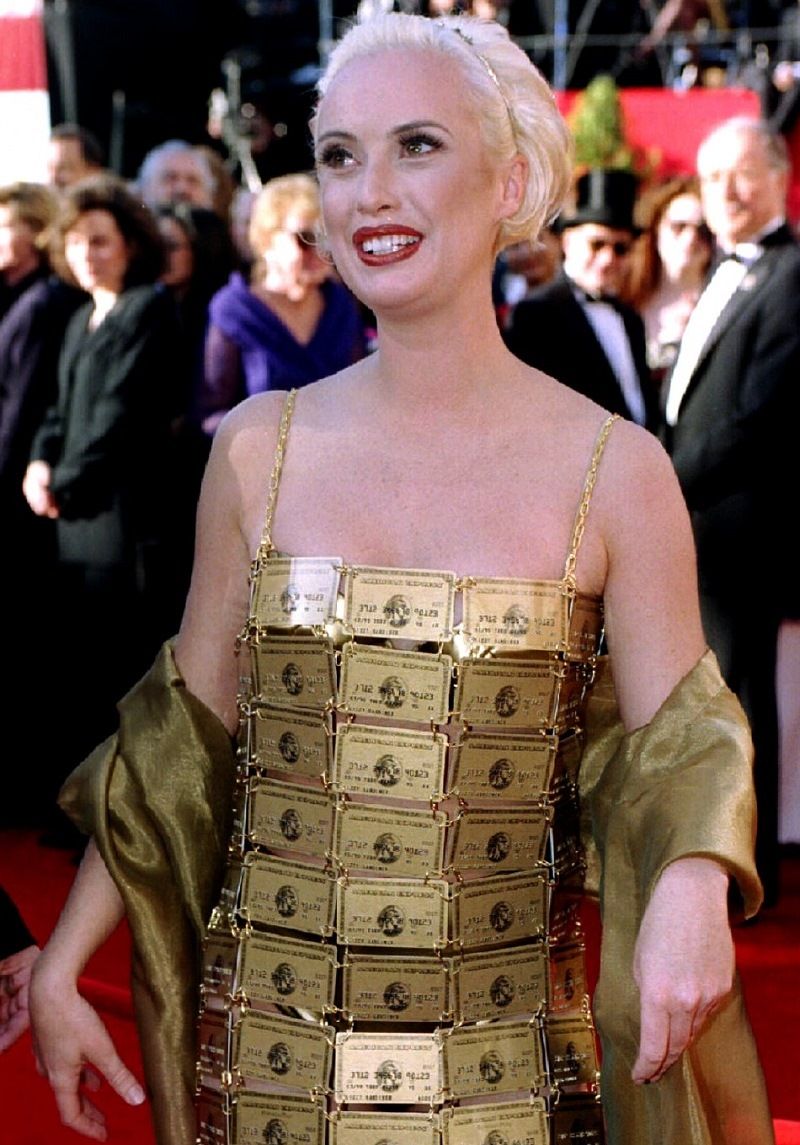 The seamless dress is designed by the Australians. They believe that their invention will soon become widespread and will firmly enter the textile industry.

The fermentation technology was used during the execution. Scientist Gary Kass from the University of Western Australia participated in the development of the fabric. The structure of the material is microbial cellulose and is similar to ordinary cotton. Live bacteria from fermented beer were added to the fibers.

Lady Gaga is used to shock the audience with her antics. One of them was a public appearance at a music awards ceremony in a dress made of real raw meat. It was sacked by the scandalous couturier Frank Fernandez, who needed several kilograms of delicious beef to work. Not everyone liked this idea, especially the Greenpeace and vegetarians. 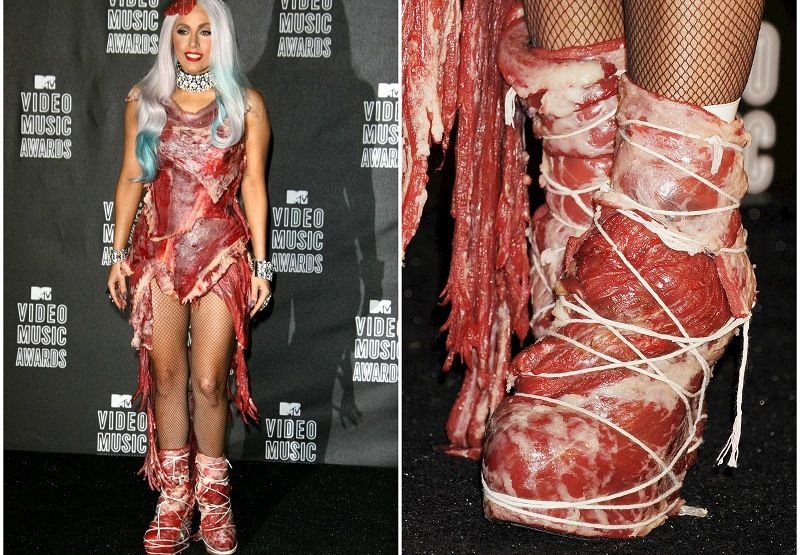 From flour and eggs

Ukrainian pastry chef Valentin Stefano decided to surprise his future wife and created an edible wedding toilet. It took him two months to work. The main ingredients used by the man are flour, eggs and caramel cream. The product turned out to be heavy – weighing about 20 kilograms. 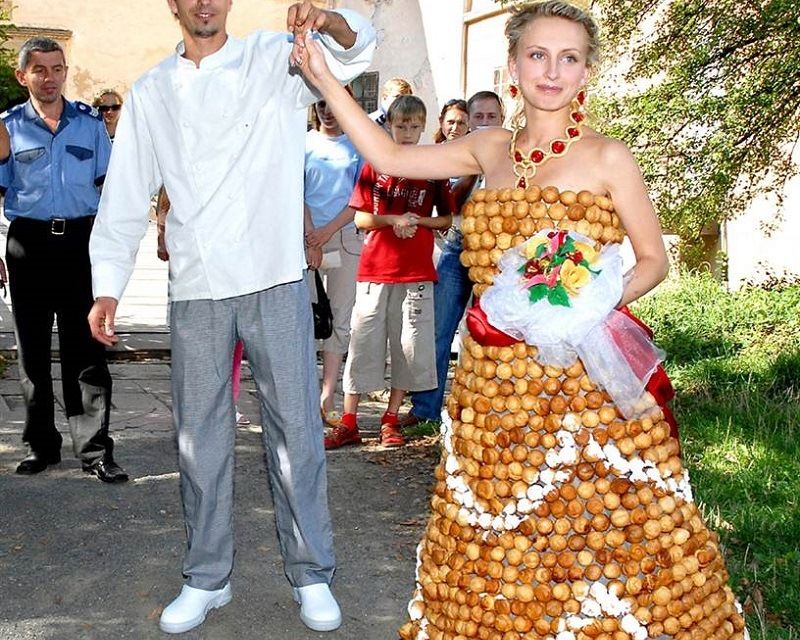 Hollywood actress Emma Watson attended an exhibit at the Metropolitan Museum in a black and white outfit from Calvin Klein and Eco Age. The secret and the uniqueness lies in the fact that it is made from a fabric made from recycled plastic. The top opens the shoulders, and the black trousers give the appearance of a full-fledged evening dress. Thus, the girl drew attention not only to her person, but also to environmental problems. After all, everyone knows that plastic is one of the largest sources of pollution on the planet. 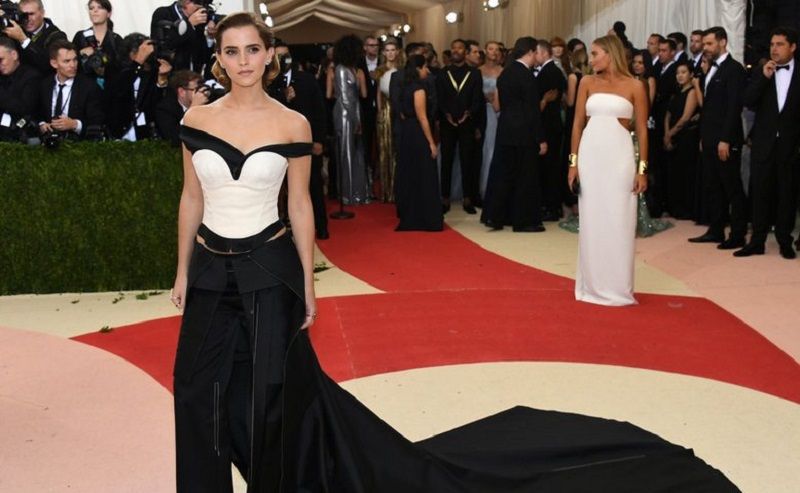 An outfit of fresh flowers is a beautiful, unusual and original idea.

One piece was made by British fashion designer Joe Massey. It used gerberas, chrysanthemums, carnations and three varieties of roses. It took almost two thousand flowers to work. But it was worth it, because the output was a real masterpiece.

Several floral creations have been designed with the inspiration of the famous designer Alexander McQueen. The models were overwhelming success, and the brand began to receive numerous orders for such products. 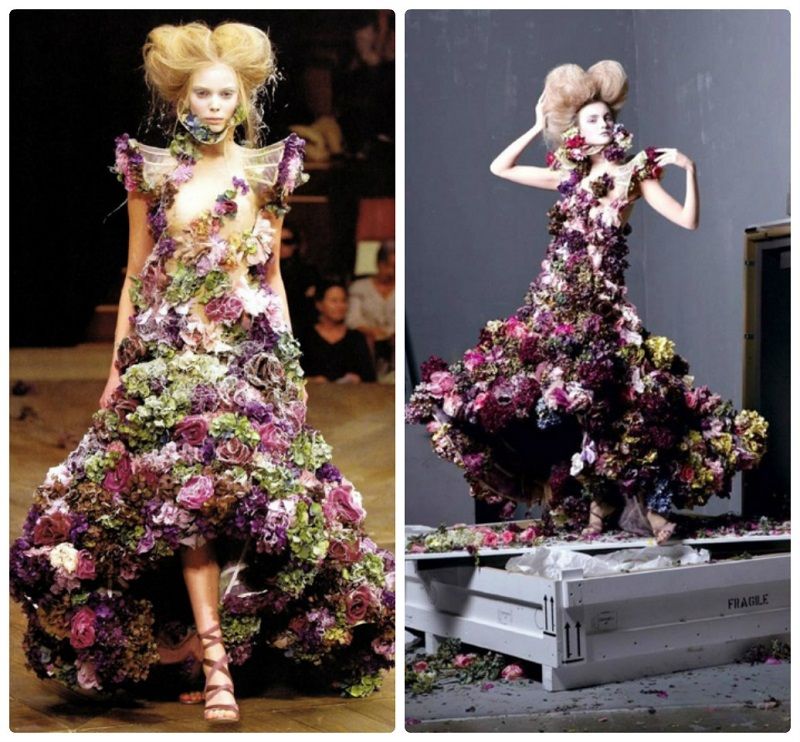 Made of wood and equipped with several bolts for fastening. The height of the skirt is adjusted using special cables. Thanks to this mechanism, it is possible to raise it higher in order to keep it cooler on hot days. Creator Grace Johnston used wood lamination technology to bend the planks in a specific way. 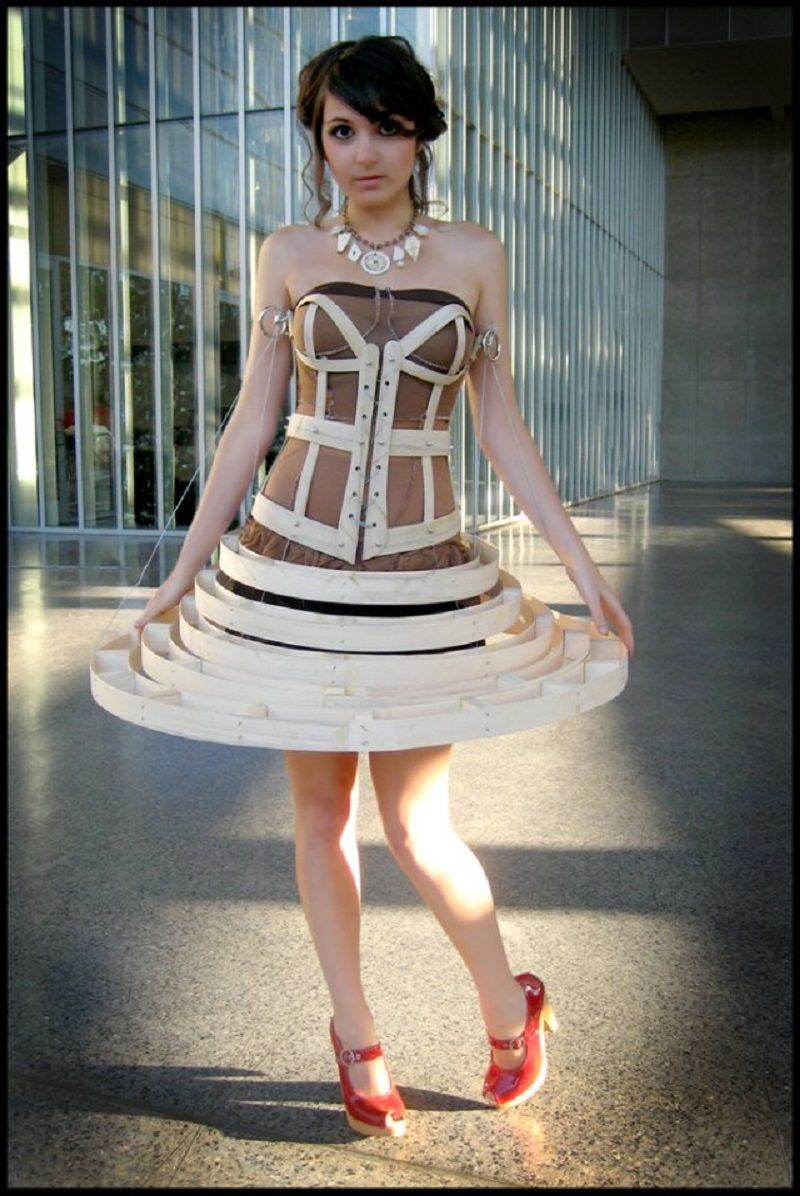 An extraordinary wedding dress, consisting of patches of pink and dark gray fur, was invented by fashion designer Ornella Moneguzzo. To complement the image, a transparent insert is made at the waist. A bride in this outfit will resemble a cute Easter bunny. Surely, there are girls who will like this image. 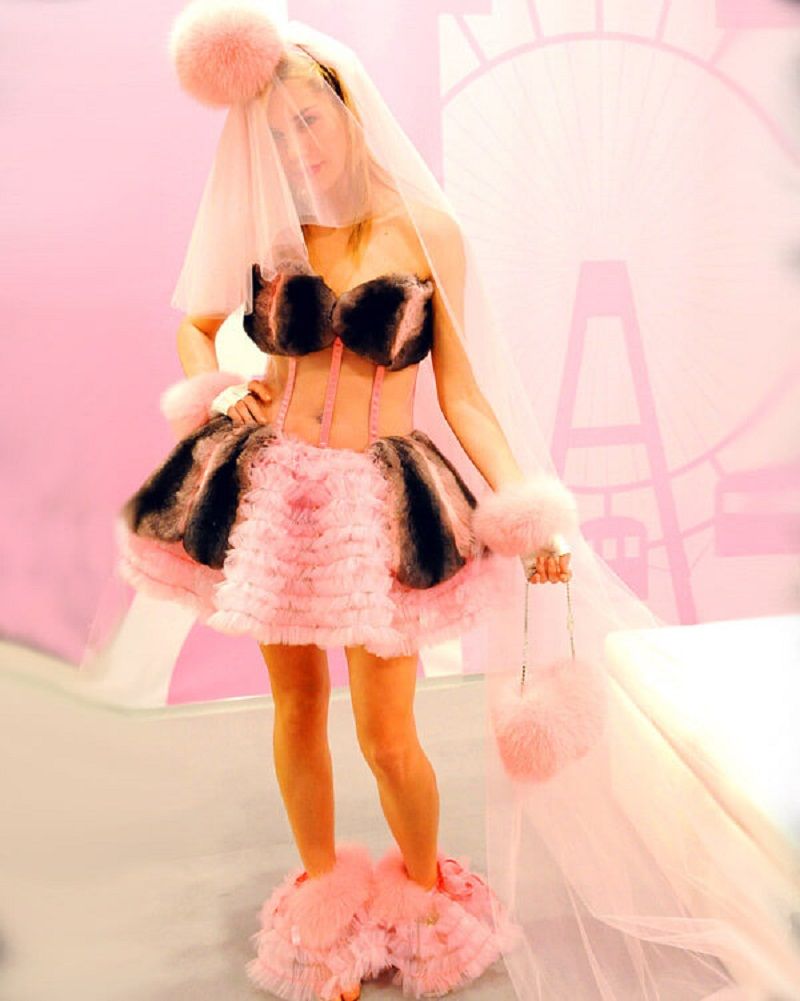 Created by fashion designer Sebastian Erazuris. The dress, made of numerous zippers, can be adjusted to almost any size. Each zipper hides a specific color. If you unbutton and fasten them in different ways every day, you get several style options. 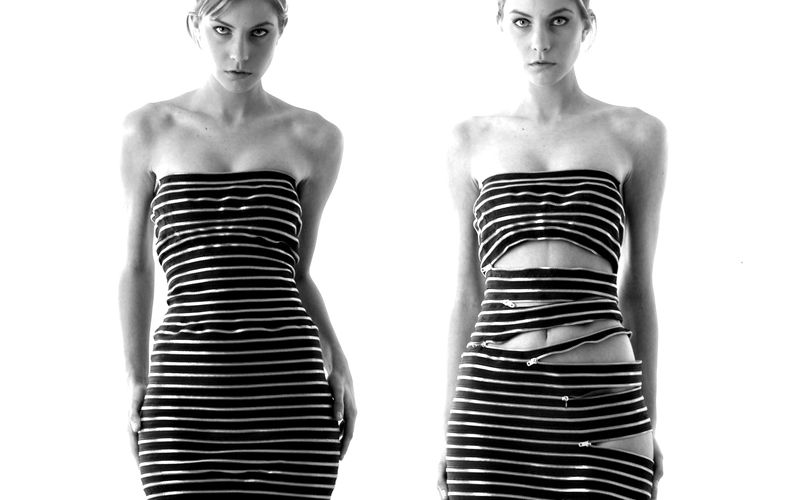 For Anya Pletneva, the soloist of the famous Vintage group, a white toilet was sewn into the floor from soft toys – teddy bears. With her shocking appearance, the singer impressed her fans, although it was not very convenient to defile in it. Anya stumbled right on stage, making the audience laugh. 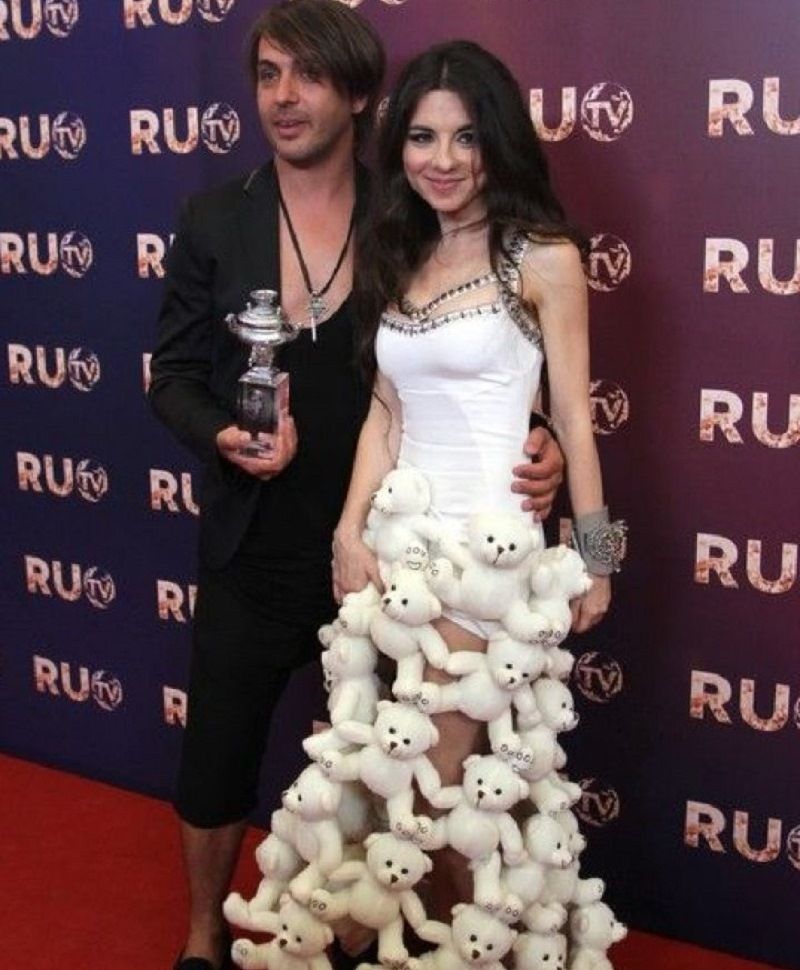 Paper is used in a wide variety of fields and, finally, it made its way to the fashion world. Paper outfits have already been invented by eminent couturiers Paco Rabanne and Zoya Bradley.

Trash bags are the thing that people use every day. However, few people think that they can be useful in other areas. On the other hand, designers found an unusual application, because they began to create dresses and other clothing items from garbage bags. 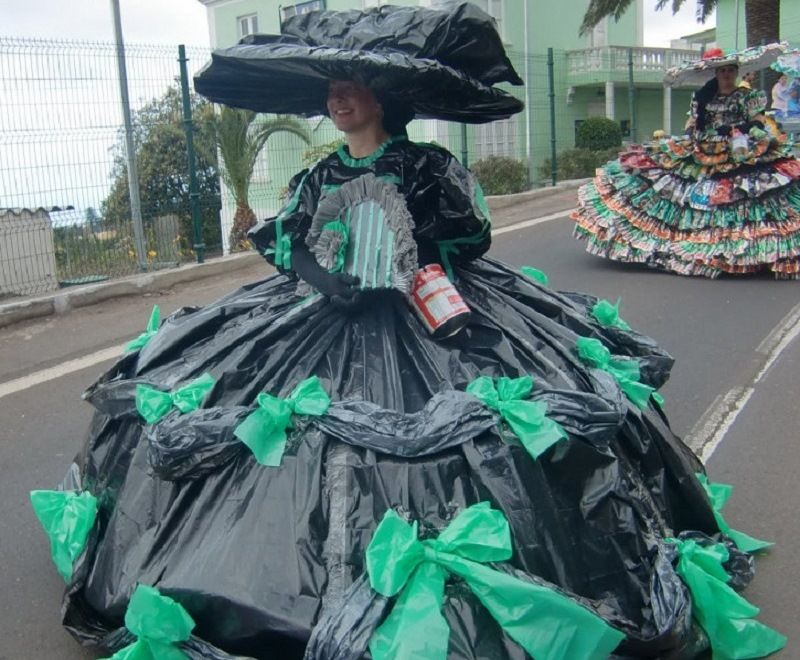 One of the most unusual wedding dresses was made several decades ago from a parachute. He has a very interesting story. Military pilot Claude Hensiergens used a parachute to create the outfit, which saved his life. The man proposed to his beloved and offered this option for wedding decoration. Local tailors managed to create it truly fabulous – with a fluffy skirt and a long train.

Chocolate is tricky to make toilets because it melts easily when the temperature rises slightly. But this circumstance did not stop the fashion designers. The couturier did their best to create truly unique models. Of course, I had to work hard to keep the latter in shape and not melt.

For example, one of the models created by Ian Stewart and Chantal Cody was shown at Chocolate Week in 2008.

The dress, made in a traditional Muslim style, was invented by British fashion designer Debbie Wingham. Despite the severity and simplicity, the outfit looks very rich because of the exquisite decoration. Only very expensive materials were used. The black toilet is embroidered by hand with gold threads and decorated with two thousand precious stones. Among them are diamonds of black, white and red colors. The latter are extremely rare, which immediately increases the cost of the product many times over. The presentation was held in a private show in one of the Dubai hotels. It was this city that inspired Debbie to create such a masterpiece.

Singer Brit Savage came up with the creative idea to make herself a performance outfit from tax forms. The fact is that the concert was scheduled for Tax Day. The girl found this coincidence very funny. 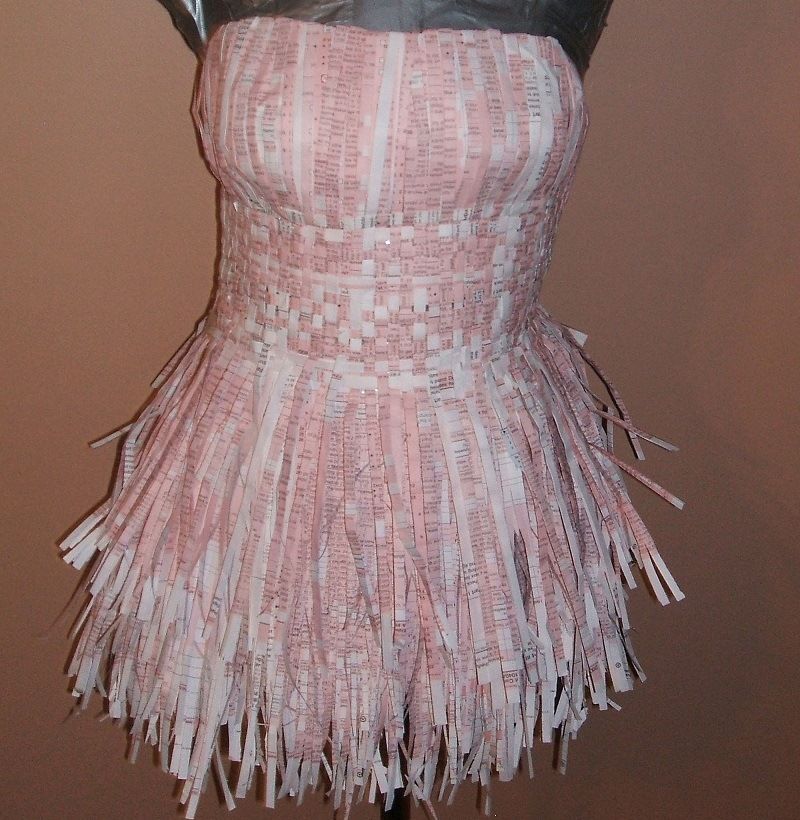 The Danish fashion designer showed originality and came up with a dress made of ropes and threads. The idea was to make people think about environmental problems in such an original form.

Toilet paper wedding dresses have become commonplace. In America, bridal fashion stores have been holding contests for the best outfit from her for several years in a row.

One of the winners created a short, snow-white model with a very fluffy skirt. The model looks very flirty and sophisticated. At first glance, you can’t even determine that the dress is made of ordinary toilet paper.

The famous outfit of the popular diva Mereline Monroe, in which the actress shone at the birthday of American President John F. Kennedy. Cobweb-like fabric was used for sewing, which was embroidered with thousands of diamond sequins. It was bought at the auction for a huge amount — over one million dollars. 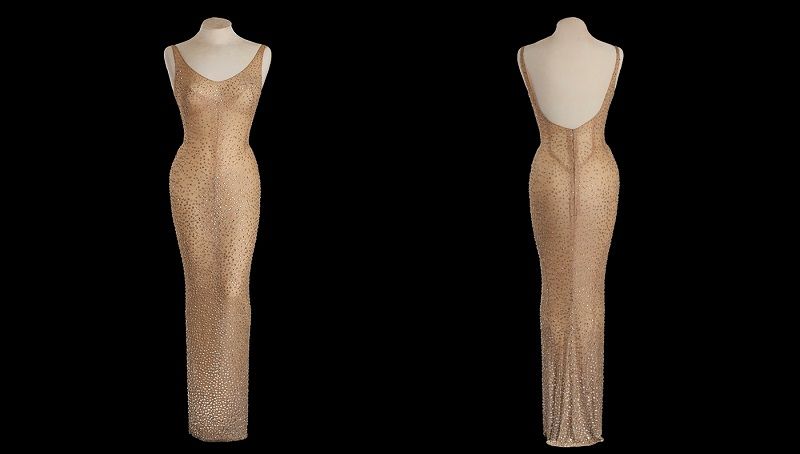 In Kiev, Oleg Tarnopolsky surprised everyone with a beautiful and unusual dress, which used braids and spikelets from natural hair. It has become a real hit of the season and a symbol of autumn.

Croatian firm and Simona Gotovac presented a unique model of 50 meters of blonde hair. The creation was highly appreciated at the Croatian Fashion Week.

Thelma Madine from England, in tandem with the Voodoo beauty salon, also designed a “hairy” dress. It consists of twelve petticoats, and the weight of the product exceeds 40 kg. It took two weeks to work.

The first, the balloon models were invented by the artist Takashi Kawada and the air designer Riya Hosokai. These people set a new fashion trend called Daisy Balloon. The created products were a huge success. A similar idea was instantly picked up by designers from other countries. True, it should be borne in mind that outfits are short-lived and quickly lose their “presentation”. 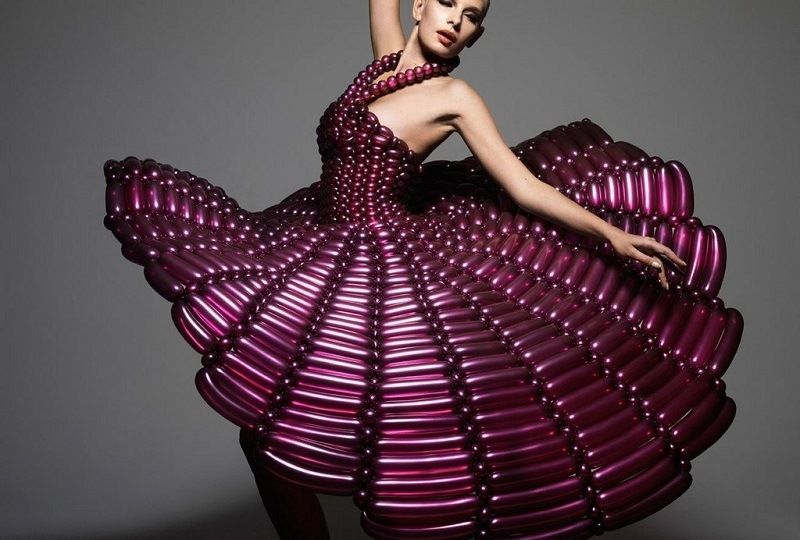 It is the creation of the famous Japanese jeweler Ginza Tanaka. For creation, 15 thousand Australian gold coins were used. The weight of the product is about ten kilograms. It was first presented to the public at a fashion show at one of the training colleges in Tokyo. 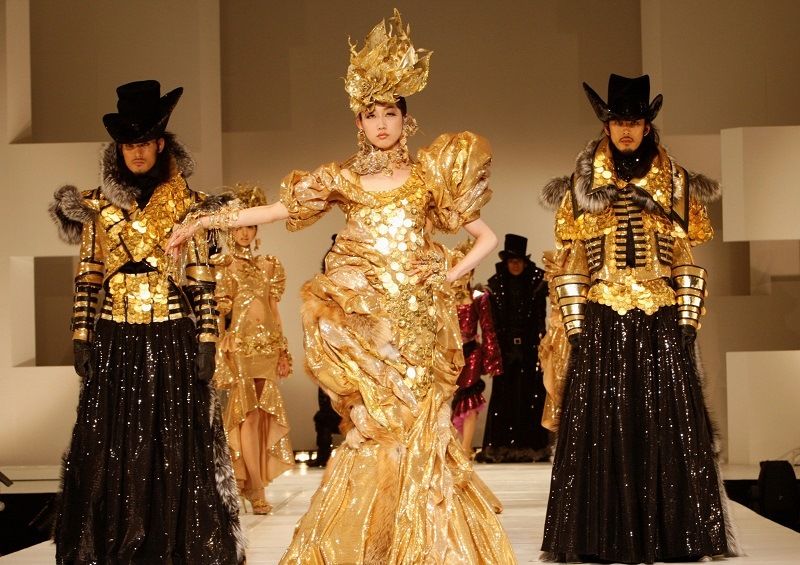 Several masters worked on it at once. The price of a wedding dress is approaching one and a half million dollars. Two thousand peacock feathers and several dozen green jades were used. The masterpiece was exhibited in China at a wedding exhibition, where everyone could admire it. 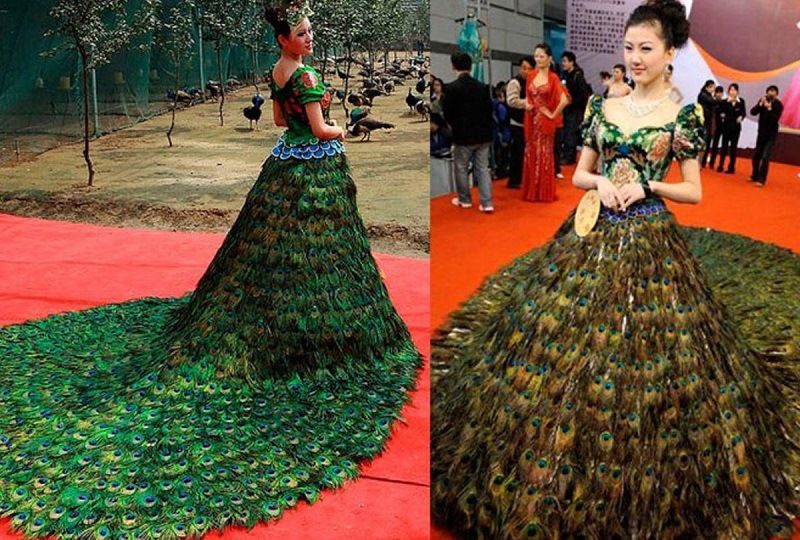 A burgundy-colored toilet was created by Malaysian couturier Faisol Abdullah. Sewn from silk and taffeta, studded with numerous diamonds. The long train is also embroidered with small precious stones. Exhibited at the 2009 Asian Fashion Festival. The cost is approaching $ 30 million. 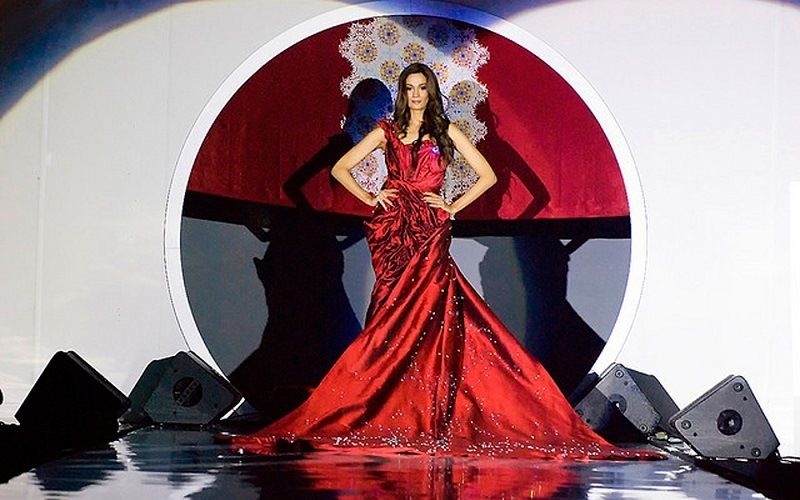 Surely in the near future there will be many more interesting and unusual dresses, because the imagination of fashion designers is simply inexhaustible. You can use them to go to proms, weddings and other important events to surprise others.