Diving into the dumpster behind the store, the man found a lot of fresh vegetables and fruits.

Luca Corbi knows firsthand that in the trash you can find not only unappetizing leftovers, but also quite good products.

Every now and then, diving into the garbage, a resident of Canberra (Australia) shows Internet users how much food grocery store employees throw away.

On their next trip to the supermarket, Luca and his associates found a whole warehouse of fruits and vegetables fresh enough to eat. Several potatoes, carrots, leeks, ginger, lettuce, rhubarb, tangerines, capers, oranges, grapes and asparagus became the prey of enthusiasts. The prey was brought home, and the washed products took their rightful place in the refrigerator. Luca added that he personally was provided with vegetables and fruits for a whole week. 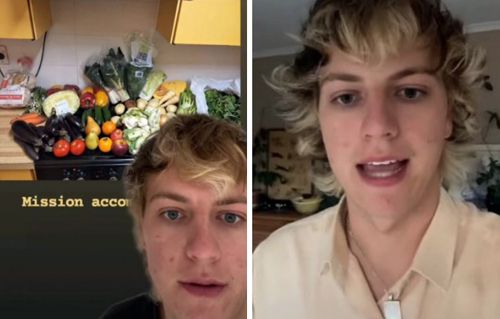 A man dives into the garbage not only to save money, but also to show how much good food is thrown away from stores. Just because the expiration date has barely expired or is about to expire. It’s no surprise that Luka’s posts get a lot of emotional response from people every now and then. It’s scary to imagine how many people cannot afford to buy fruit, but it turns out they just go to the trash. However, representatives of some large supermarkets (for example, “Woolworths” and “Coles”) are ready to respond to criticism. They have already begun implementing alternative recycling programs for products that do not belong on the shelves. Such food is donated either to charities that help the poor, or to farms where the products go to animal feed.