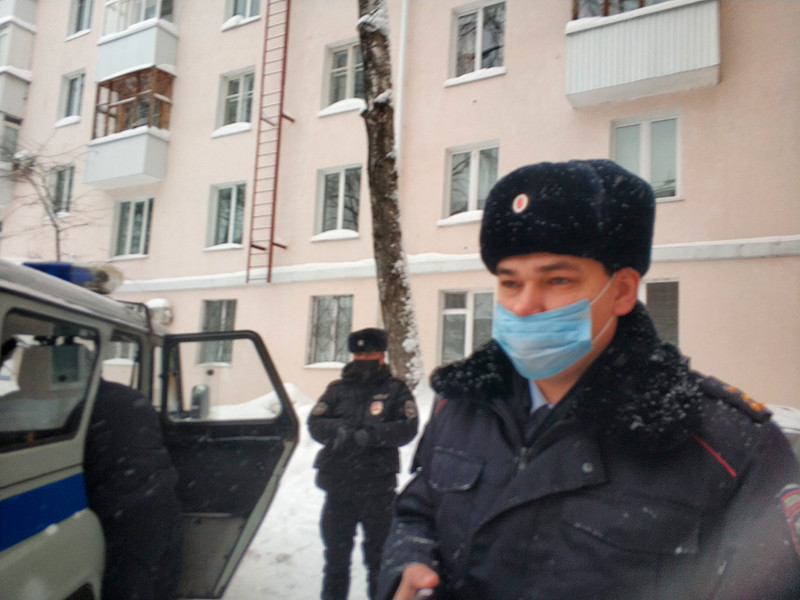 The Prosecutor General’s Office on Friday threatened the protesters in support of Navalny with criminal cases of riots and the involvement of minors in rallies. The video message of the representative of the General Prosecutor’s Office Andrei Ivanov was published by the Moscow 24 channel owned by the mayor’s office. “If during public events provocations and attempts at violent actions are recorded, the actions of these persons may be qualified under Article 212 of the Criminal Code [о массовых беспорядках]”, – said Ivanov.

“I would especially like to note that the involvement of minors in this illegal activity can form the corpus delicti provided for in Articles 150 and 151.2 of the Criminal Code,” added the representative of the supervisory agency.

The Main Investigation Department of the ICR opened a criminal case under paragraphs “a,” in part 2 of Article 151.2 of the Criminal Code on the involvement of minors in the commission of unlawful acts that knowingly pose a danger to the lives of minors through information and telecommunication networks, the press service of the IC told Interfax. The case was opened following complaints from “numerous appeals from various associations of parents of Russian schoolchildren” published in the media.

The Investigative Committee explained that the supporters of Alexei Navalny are spreading on the Internet, social networks TikTok, VKontakte, Facebook, Twitter, Instagram and on Youtube calls for minors to come to unauthorized rallies on January 23 across the country.

They do this despite the fact that in many regions, including Moscow, mass events are prohibited due to the coronavirus, and the organizers were denied permission to hold rallies on that day. “In a difficult epidemiological situation and current restrictions, the holding of mass events involving a large number of people creates a real threat of disease for them,” the UK explained.

The Ministry of Internal Affairs accused the chiefs of headquarters, Alexei Navalny, of “organizing provocations and violent actions.” The statement was published on the ministry’s website. The ministry also claims that the headquarters received instructions from the head of the headquarters network Leonid Volkov and the head of the Anti-Corruption Fund Ivan Zhdanov “to maximize the involvement of young people, including underage citizens,” at rallies. “The profile division of the Ministry of Internal Affairs has initiated a pre-investigation check,” the ministry’s press service added.

On the same day, Moscow Mayor Sergei Sobyanin called the “illegal mass action on January 23rd” “unacceptable”. His video message was published by the same “Moscow 24”.

At the beginning of his address, Sobyanin mentioned that “the situation [с COVID-19] in European countries it is developing dramatically “, while in Moscow it” inspires cautious optimism. “

After that, Sobyanin urged “to comply with the requirements of sanitary doctors” and “refrain from participating in an illegal rally.” “Attempts of mass involvement of minors in this action look unacceptable and cynical. I must warn that law enforcement agencies will ensure the necessary order in the city,” he added.

Meanwhile, the VKontakte social network, at the request of the Prosecutor General’s Office, blocked almost all public posts about rallies in support of politician Alexei Navalny in different cities of Russia. Of the 66 links, 63 were blocked. On one of the unblocked pages, the administrators wrote that “there will be no rally.” The rest indicate that “this material is blocked on the territory of the Russian Federation on the basis of the request of the General Prosecutor’s Office of the Russian Federation dated 20.01.2021”.

According to the latest reports from all over the country, the security forces began to detain headquarters coordinators, FBK employees and activists. Some are arrested on administrative charges.

So, the police came to a rented apartment to the coordinator of Navalny’s Cheboksary headquarters, Semyon Kochkin. He was streaming live on his Instagram. The Central District Court of Volgograd has arrested the coordinator of Navalny’s local headquarters Yevgeny Kochegin for seven days, headquarters officials said. Kochegin, together with his assistant Maria Khudoyarova, were detained as witnesses in a drug trafficking case; searches were carried out in Kochegin’s rented apartment.

The Meshchansky District Court of Moscow arrested Georgy Alburov, an employee of the FBK investigation department, for 10 days. He told about this on Twitter. Alburov was detained the day before at the station when he returned from St. Petersburg. The protocol under the article on organizing an unauthorized action (part 2 of article 20.2 of the Administrative Code) was drawn up due to the fact that Alburov on January 18 shared on Twitter a link to Alexei Navalny’s appeal.

Simonovsky District Court of Moscow fined FBK lawyer and producer Navalny LIVE Lyubov Sobol 250 thousand rubles, told her lawyer Vladimir Voronin on Twitter. She was found guilty of repeated violation of the rules for holding the action (part 8 of article 20.2 of the Administrative Code). Sobol was detained in the afternoon of January 21 in the lawyer’s car parked at her house. She was released from the police station only at night; after the protocol was drawn up, the policeman did not let her leave, blocking the road.

In Krasnoyarsk, traffic police officers stopped the car of the coordinator of the local Navalny headquarters, Anastasia Korsakova, wrote Headquarters representatives on Twitter. Korsakova, who has a young child, was taken to police station No. 7 to draw up a protocol on organizing a rally without giving notice (part 2 of article 20.2 of the Administrative Code).

The Leninsky District Court of Krasnodar has arrested Anastasia Panchenko, the coordinator of the local headquarters of the politician Alexei Navalny, for 10 days, according to the telegram channel of the headquarters. She was found guilty of organizing an action without giving notice (part 2 of article 20. 2 of the Administrative Code).

The Savelovsky District Court of Moscow has arrested the press secretary of the politician Alexei Navalny, Kira Yarmysh, for 9 days. She herself reported this in Twitter… The press secretary was found guilty of organizing the action without giving notice (part 2 of article 20.2 of the Administrative Code). Yarmysh was detained on the evening of January 21 during the broadcast of “Dozhd”. She was left at the police station overnight.

In St. Petersburg, the district police officer came to the home of Vara Mikhailova, a lawyer for the Apology of Protest, and David Frenkel, a correspondent for Mediazona. This was announced by the journalist himself. The police officer wanted to hand them a warning about the prohibition to participate in the actions from 20 to 29 January, but Mikhailova and Frenkel did not open the door for her and asked to put the paper in the mailbox.

Ufa police detained Fyodor Telin, a lawyer at the headquarters of the politician Alexei Navalny. About this he reported on Twitter. In Volgograd, head of staff Yevgeny Kochegin and activist Maria Khudoyarova were detained, “Caucasian Knot” reports with reference to lawyer Sergei Kunitsky.

The Pervorechensky District Court of Vladivostok has arrested Yekaterina Vedernikova, coordinator of the local headquarters of the politician Alexei Navalny, for three days, OVD-Info reports, citing lawyer Polina Sidelnikova. She was charged with organizing the action without giving notice (part 2 of article 20.2 of the Administrative Code).

The chief of staff of the politician Alexei Navalny in Tyumen, Ivan Vostrikov, was detained near his parents’ house, according to the telegram channel of the local politician’s team.