Descent ship on the water

Descent ship on the water is an impressive and wonderful sight, it has an interesting long history. In what sense, given the ritual of the first meeting of the ship with the water element our ancestors and what are its echoes can be found in ceremonies today?

Blood and wine – from the history to the present

The tradition during the descent ship on the water to break on Board a bottle of champagne for good luck, known to many. But few know that initially the ritual was carried out with the involvement of other alcoholic beverage – wine. Red wine at all times symbolized blood and sacrifice. Washing symbolic "blood" vessel, the sailors thus had the purpose to "revive" a piece which supports protruding from the nose of the ship timber. 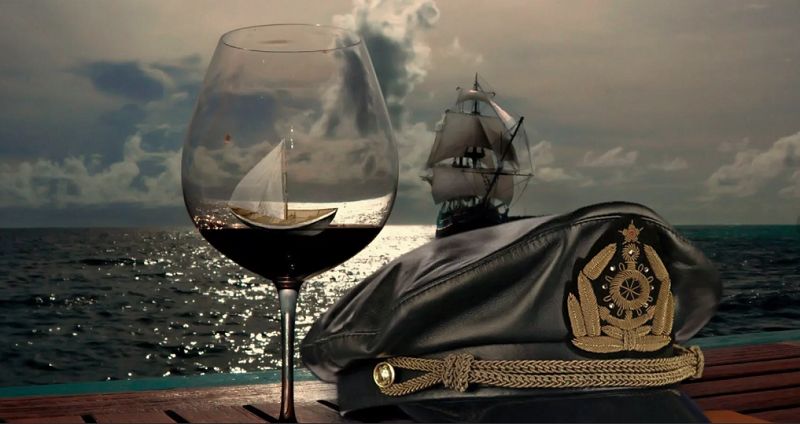 Bloody ritual of the middle ages

The tradition to wash the way "blood" traces its history from the Viking era.

Medieval Scandinavian sailors believed that to appease the dark gods of the seas can only be bringing them to the sacrifice of human blood. For this purpose, to trigger the track each vessel sailed in the way they tied the prisoners.

The same barbaric tradition were also found among the peoples living on the Islands of Tahiti, Tonga and Fiji. Only in this case, the victims were tied is not the path, and logs, performing the function of rollers. "Bloody baptism" was accompanied by any of the hikes and descents war canoes on the water. 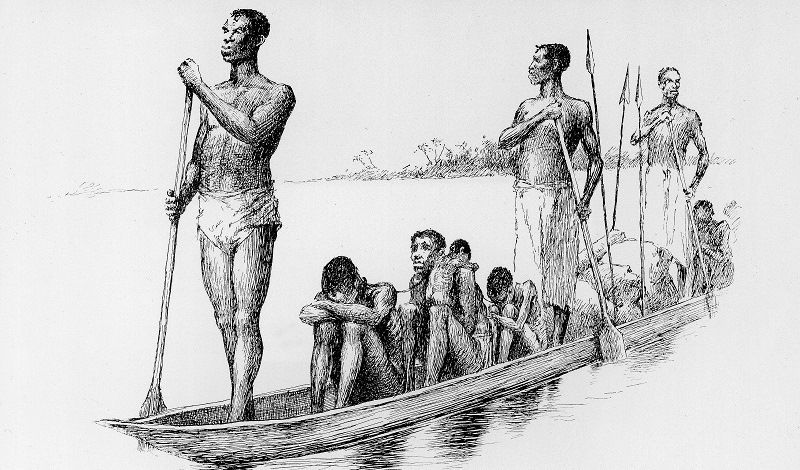 Ritual sacrifice when launching warships were intended not only to appease the gods of the water element, but also to give confidence to the sailors, who even before meeting the enemy be able to "smell blood". Often then the victim's head was fixed on the stern.

Mention this bloody tradition are to be found in sources Dating from 1784 year. They describe events in the County of Tripoli and especially the descent military ship on the water to the bow of the ship which was tied one of the slaves.

An alternative to human sacrifice

Since the dissemination of Christianity, this tradition has become less "bloodthirsty notes." The sacrifice was bloodless. The ceremony was accompanied by "only" beating and forced swimming apprentices working on ships ship carpenters.

Descent ship on the water is not complete without the mandatory procedure knocking out the wedges from under the starter sled. This dangerous work was mainly commissioned to execute people, whose fate has been predetermined – criminals. For work "under the bottom" they are rewarded in the form of impressive portions of grog. Drunken workers while knocking out of wedges, loudly singing songs. 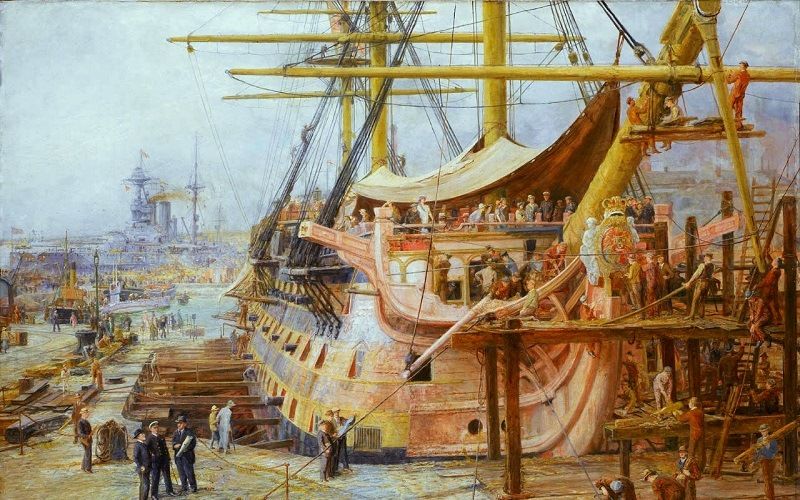 As it was considered in those days, strong rum, loud music is able to please not only the living but also the dead. And to appease the gods of the water element, the sailors flooded the deck with the blood of sacrificial animals: goats and black sheep, or white chickens and roosters.

Over time, and this pagan rite refused, replacing the shed blood of the sacrificial animals, washing the sides of red wine.

Until the end of the 17th century commonly held ritual of the descent ship on the water, accompanied by washing of the nose of the ship with the wine spilled from the silver Cup. At the end of the ritual, the Cup was thrown into the sea, as the Supreme gift of the sea God Poseidon. The ritual had cost "a pretty penny", but because over time, the Cup of silver were replaced with glass bottles. It is known that the first time smashed the bottle on the front of the ship in 1699.

Wine is not the only drink that is used for ablution at the time of the descent ship on the water. For example, the missionaries in India "baptized" milk of unripe coconuts. Turkish ships and rain water, and the fishing vessel – fish oil.

In 20-e years of the last century, when the U.S. was governed by a national ban on the production and sale of alcohol, referred to as "prohibition", during the traditional ritual began to use ginger beer.

The ceremony of "christening" of the ship

The birth of a new vessel, and has been associated with festive ceremonies. For example, in ancient Greece is sent in the first way the ship was decorated with lush garlands of flowers, and the deck was covered with branches with branches of Laurel. 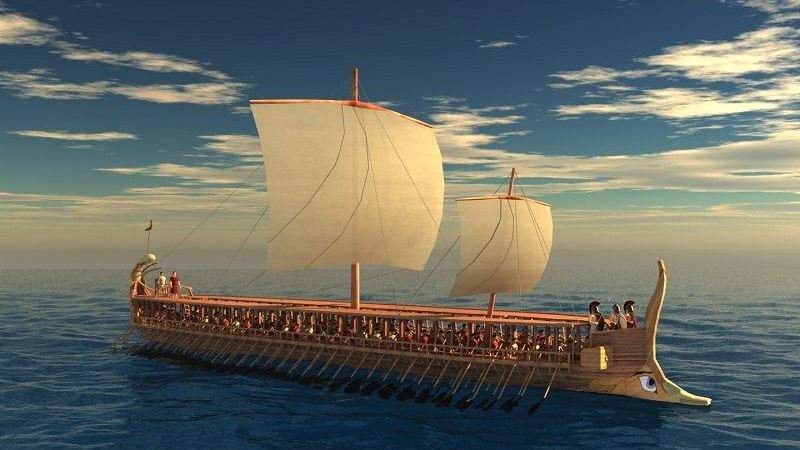 During the celebration, play fun music, there were poems. Using the rhetoric and rhyme, the participants of the ceremony turned to be presented to Pallas Athene and Neptune so that they protect the new vessel from dangers and tribulations.

From the 15th century in Europe, the ceremony of "christening" ships were led exclusively by noblemen: Dukes, princes and kings. The ceremony consisted in the fact that by drinking from the Cup, you had to pour the remaining wine on the deck, saying "I Baptize you in the name...God bless you and all who will be with you to swim!"

The key to a successful start

The process of the descent ship on the water often includes both funny and sad moments. So in the 19th century, widespread trend to assign to the ship's "godmother". To be awarded this title lady had to break the bottle at the time of typesetting vessel run-up in the trigger paths the pile and give a blessing.

With this rite was, there is one funny story that happened to the Princess designated "godmother". The girl has not calculated own forces and instead of to break a bottle on Board the vessel, did it, but the head of the guest of honor of the occasion.

Since then the bottle began to fix rope to the bow of the ship. But the requirement to wrap the bottle in a mesh cocoon came after fragments of shattered bottles razvivavsheesya repeatedly wounded the participants in the ceremony and standing in the front rows of the audience. 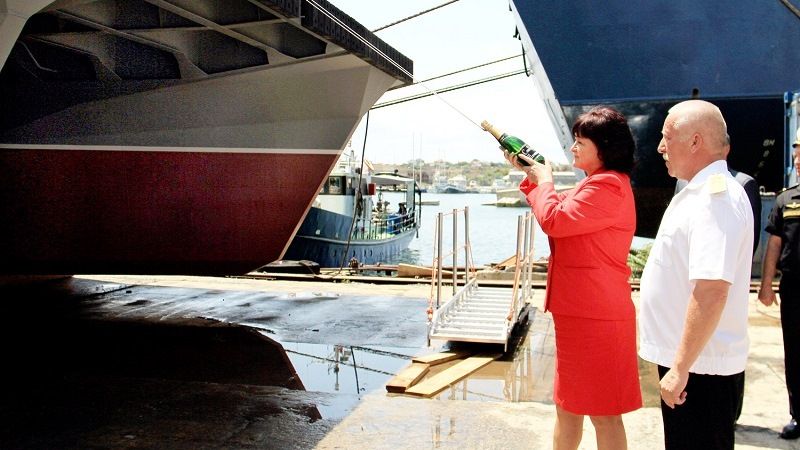 With the ceremony of launching the ship on the water surrounded by lots of superstition:

The cork from the bottle, which crashed during the ceremony, it is customary to continue to keep in the captain's cabin. It is placed in a pair with a portrait of "the cross", using as an amulet, protecting from misfortune.

There is an unspoken rule that the vessel should be continuously immersed in water. A clear proof of this is one of the worst descents of the ship on the water – British transatlantic steamship "Titanic." At least for lubricated slideways of a gangway and involved 23 tons of fat, but at the moment of releasing one of the logs flew, killing a man standing nearby. Unfortunately, no one took into consideration a bad omen.