Demand for antidepressants in Russia grew by 70%

Against the backdrop of political events, talk about the use of nuclear weapons and the ever-changing reality, the Russians’ nerves began to play pranks.

They began to become depressed from the news flow and sleep poorly at night, and stress for many is already an integral part of life.

Since February 24, the demand for tranquilizers, antipsychotics, antidepressants, sleeping pills and anti-anxiety drugs has been growing and not falling.

ONE MILLION PACKS OF SEDATIONS PER MONTH

According to DSM Group, the peak of demand was observed from February 28 to March 20 – then sales increased by about 50%. The demand for such drugs is not decreasing, and the mobilization that has begun has only added fuel to the fire, adding to the nervousness of the population. The proportion of citizens experiencing fear, longing, irritation, negative emotions and tension, according to sociologists, only for one September week – from September 22 to September 28 – increased by 27% and reached 47%. The level of fear in society has grown: the number of people experiencing negative emotions – to a maximum in 23 years, and tension – in 17 years. Attacks of anxiety and depression are forcing people to buy not only over-the-counter sedatives, such as afobazole, but also prescription ones – cipralex and grandaxin. Antidepressants sell out at an average rate of a million packs a month. According to the results of the first half of the year, the demand for them jumped by 66%, calculated at the Center for the Development of Advanced Technologies (CRPT, the operator of the Chestny Znak system). The epicenter of depression, if you look at the reports of pharmacies, was Moscow. In the capital, antidepressants are sold in the amount of 1.3 thousand packs per 10 thousand people. This is followed by St. Petersburg (1.2 thousand), Moscow region (1.1 thousand), Karelia (939) and Rostov region (909).

NO PROBLEMS WITH DRUGS

Despite the increased demand, analysts do not predict problems with the availability of antidepressants and sedatives. While maintaining the pace of sales at the level formed at the end of the third quarter of 2022, stocks of antidepressants will last at least seven months, and sedatives – for six months. At the same time, in the middle of autumn, one of the most popular antidepressants, Zoloft, disappeared from Moscow pharmacies. The people it was prescribed for can’t find it. However, as stated in Roszdravnadzor, the absence 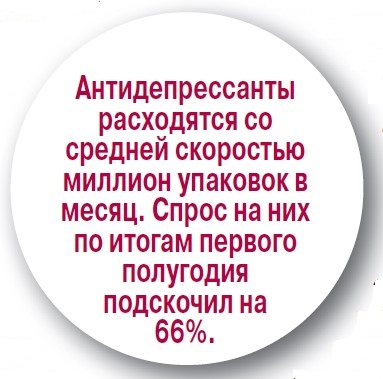 The drug is temporary and is associated with excessive demand.

By the way, the medication has disappeared from Russian pharmacies more than once before, but then returned to the shelves and, most likely, will return now.

It is worth noting that Russian scientists also do not stay away from problems and try to help their compatriots cope with depression and stress, but not with the help of drugs, but … products. In the Urals, for example, they created anti-stress bread. According to the developers, the bread competes with antidepressants due to its resveratrol content. It is a biologically active substance of plant origin, which is found in grapes, pomegranates, cranberries and blueberries. Resveratrol helps reduce aggression and anxiety, improves sleep.

Already passed preclinical tests of bread on rats. The next step is the search for volunteers and clinical trials. If the effectiveness of the therapy is confirmed, people with post-traumatic stress disorders will be fed miracle loaves to correct their condition.

Until the anti-stress bread appeared on the shelves, you can help yourself cope with anxiety, fear and apathy with the help of well-known products that make up for the lack of serotonin in the brain and thereby fight stress. These are chocolate with a high content of cocoa beans (it contains tryptophan, an amino acid that is converted into serotonin), mint tea (reduces cortisol levels, and therefore the effects of stress), citrus fruits (lemon, orange and grapefruit reduce blood cortisol levels). ), berries and fruits rich in glucose (accelerate the delivery of serotonin to the brain), brown rice, legumes, spinach (have an anti-stress effect, since they are rich in magnesium useful for the nervous system). Try also to give preference to complex carbohydrates – whole grains rich in fiber. They also increase serotonin levels.