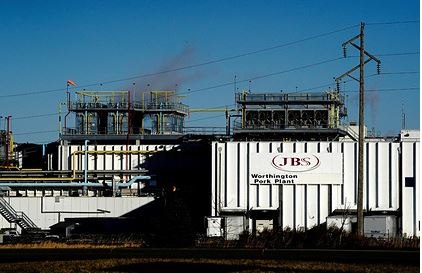 JBS, the world’s largest meat producer, has shut down slaughterhouses in the US and Canada following a cyberattack over the weekend. This could disrupt product supply chains and lead to further increases in food prices, writes Reuters.

On Monday 1 June, the Australian division of JBS was out of service due to the attack. The company claims to understand what happened. “On Sunday, May 30, JBS in the United States identified itself as the target of an organized cyberattack affecting some servers supporting IT systems in North America and Australia,” JBS said in a statement. They did not give additional comments on the nature of the attack, nor did they explain why it affected meat production.

On May 8, Colonial Pipeline, the largest fuel pipeline operator in the United States, spoke about the cyberattack. This caused problems with the supply of fuel, which were resolved by 14 May. The company had to pay hackers $ 4.4 million to avoid a complete shutdown of the pipeline.

Amid the Colonial Pipeline’s troubles, the retail price of gasoline reached record levels – an average of 7 percent, and the risk of shortages forced Americans to start pouring fuel into plastic bags.